"To me, Hugo Keenan was man of the match."

It was not all smooth sailing for Ireland, on Saturday, despite what the final scoreline of 32-15 might suggest. That being said, the Irish back three of Andrew Conway, James Lowe and Hugo Keenan all had fine games against England.

After Mike Lowry starred with two tries and an assist on his Ireland debut, at fullback, Keenan needed to be right on it against England at Twickenham.

END_OF_DOCUMENT_TOKEN_TO_BE_REPLACED

Even with Marcus Smith locating him with some high bombs, the Leinster star coped well with all aerial questions. He did a lot more besides, with 117 metres gained off 17 carries and a crucial try before half-time.

On the latest House of Rugby URC [LISTEN from 13:00 below], the outstanding performance of Hugo Keenan was given a proper going over. An England legend, meanwhile named him as the only Irishman in a strong-looking Six Nations 'Team of the Week'. 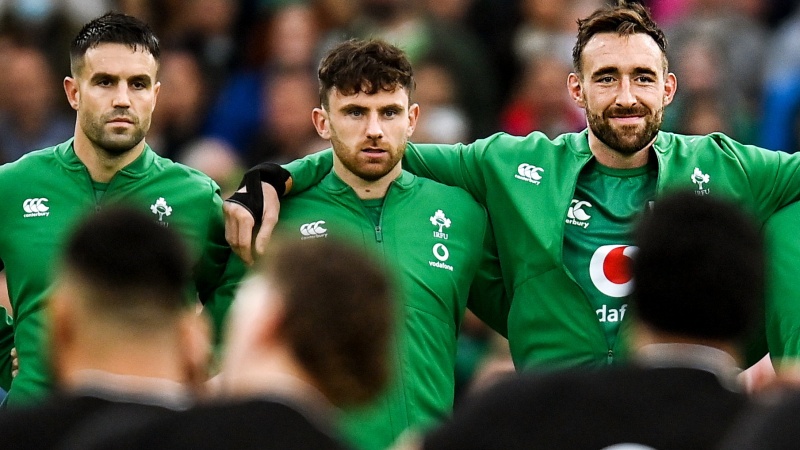 "I felt he was going up for a lot of high balls, catching it well but getting smoked, man and ball. Fair play to Hugo, he's amazing in the air and, to me, he was my man of the match... they were putting bombs on top of him, he was diffusing them and then getting smoked.

"At one point, [England centre] Joe Marchant was at the ruck - when Hugo landed - before any Irish player. You could see that hunger from England."

END_OF_DOCUMENT_TOKEN_TO_BE_REPLACED

Keenan topped our Irish player ratings from the game, finishing on the same high mark as England stand-outs Ellis Genge and Maro Itoje. He won high praise in The Guardian and Sunday Times, while legendary England back-row Maggie Alphonsi had him at fullback in her 'Team of the Week' selection for The Telegraph.

Caelan Doris was the only other Ireland player to get an honourable mention while Ellis Genge got Alphonsi's loosehead spot as he 'dismantled Tadhg Furlong in the scrum'.

You may also like
3 hours ago
From Ireland to Argentina: Alexis Mac Allister's Irish roots explained
6 days ago
Former England international admits he wishes he had played for Ireland
1 week ago
Two baffling omissions as four Ireland stars make World Rugby 'Dream Team' of the Year
1 week ago
Josh van der Flier claims World Rugby Player of the Year at Monaco ceremony
1 week ago
"Highlight of my Ireland career" - Behind the scenes as Jack Crowley and Ross Byrne covered for a legend
1 week ago
Bundee Aki reminded us all of his best qualities, on a night Ireland couldn't do without him
Next Page