"Well, Trimby, this is weird."

"Yeah. About as weird as the rest of the world."

And so began a whole new, and we hope temporary, era for Baz & Andrew's House of Rugby. Dialling in from their respective homes in Limerick and Belfast, Barry Murphy and Andrew Trimble got together (but stayed apart) in their virtual studio for the latest episode.

The lads were reunited over Skype for the show and talked about spending way more time with their families that their previous schedule suggested, making the best of the tumultuous situation we all find ourselves in, and a healthy dollop of pop culture.

They were also joined on the latest episode by Ulster and Ireland scrumhalf John Cooney, who was remaining optimistic despite having the best season of his rugby career interrupted by a global pandemic. 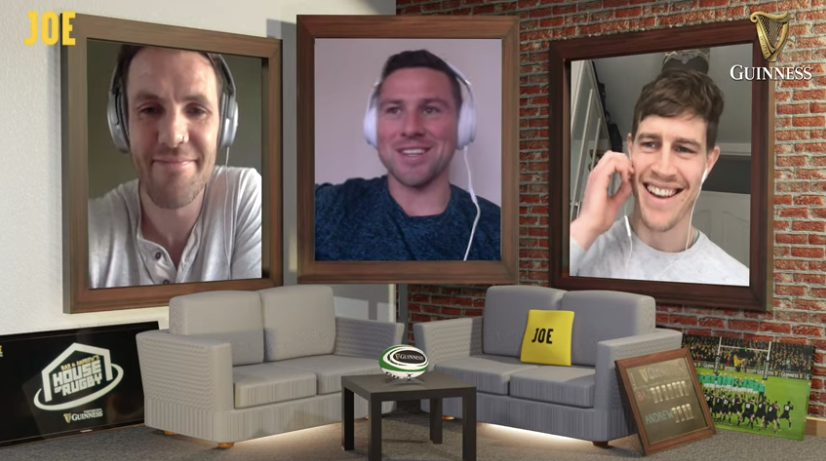 Up until the end of last week, the Ulster Rugby players were still meeting up in small groups of four and five to train, but new government advice, and measures, have seen all of the squad take to their houses and hunker down. All involved at the club are eager to do their bit to halt the Coronavirus spread.

Cooney explained how he plans to stay as fit as possible - as well as catch up on books and play Call of Duty - while he is house-bound.

"I kind of robbed a bit [of gym equipment from Ulster] already. I had planned on making a home gym for myself anyway. And I've ordered a spin bike, as well, to hopefully keep a few kilos off me.

"Last week was supposed to be a week off for me, anyway, after the Six Nations. I was meant to go to Poland but we ended up heading up the coast for a few days. I made sure I took that week off to mentally get away from rugby for a few days. It's more the mental aspect than anything, and to give yourself a break.

"Ulster have given us a few programmes to do but I'd say it'll be a relaxed few weeks, to start, because it certainly seems like it'll be an uncertain season ahead."

"The work-outs are now self-led," Cooney adds, "where everyone, today, could go into Ulster and take some weights - whether it's dumb-bells or plates or whatever you need."

Also covered on the show:


popular
"It's giving the Kerry team a bad image. They don't look like footballers, they look like gurriers." - Liveline has peaked
Bundee Aki overheard in the stands after Faf de Klerk hit on Conor Murray
"That's one of the best races I've ever had" - Coscoran kicks like a demon to seize the day
Gatland on his decision to start Bundee Aki, and drop Tadhg Beirne
Eoin Murphy's calls from the goals show Cork they're in for a completely different ball-game
Warren Gatland pulls Joe Schmidt into Lions Tour refereeing drama
The SportsJOE 12 o'clock quiz | Day 377
You may also like
6 days ago
Lions Tour sees Jack Conan revise list of toughest tackles he's received
6 days ago
Ireland's rowing heroes on what everyone was shouting as they beat Team GB to bronze
6 days ago
"Hopefully it gives young girls real hope that anything is possible. If we can do it, anyone can!"
1 week ago
Olympic medal dreams of Ireland Sevens team hanging by a thread
2 weeks ago
Football is coming to its 'real' home as Dublin set to host major tournament final
3 weeks ago
Andy Farrell advises Ronan Kelleher and others to stay alert for Lions
Next Page