Jordan Larmour scored one of the tries of the season during Leinster's PRO14 win over the Scarlets.

With Leinster leading 28-11 in the second-half, Larmour stopped a Scarlets cross kick from going out into touch before booting the ball down the field, rounding the Scarlets defence and scooping the ball with one hand to score what might not even be the best try of his career.

Ringrose has played with Larmour for both Leinster and Ireland this season and said that some of the scintillating tries he's scored this season is a testament to the work he does at training.

"I don't know how he does it sometimes. It's pretty cool seeing him do that because he works just as hard in training then it comes into fruition in games so it kind of reinforces the fact that if you work hard in training stuff like that can happen.

"I don't find it too much of a surprise when I've seen the work he puts in and what he does in training. It's reassuring from any player's point of view to see that." 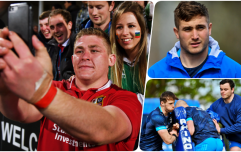 END_OF_DOCUMENT_TOKEN_TO_BE_REPLACED

Ringrose said that Leinster were spurred on this season by watching the Scarlets win last year's PRO12 final and that the squad used last year's Champions Cup and PRO12 semi-final defeats as motivation this season.

"The primary thing was I wanted to get back from injury and start playing again, but yeah, ultimately you want to finish the year like we have now.

"We fell short in two semi-finals last year so that always sticks with you as motivation. When your watching teams lift the trophy that always kind of spurs you on.

"They would have been long term goals but ultimately to achieve them it's focusing each week on the work you put in.

"Even going into the Grand Slam, personally, every week has been like a grand final given the teams your playing each week."


popular
"I remember someone saying, 'This guy's the best of the lot of them. Just wait for him'" - Brian O'Driscoll
"I trained with a guy that was born in 2004 the other day. We reckoned Earlsie could be his father!" - Peter O'Mahony
Nigel Owens on most annoying players to referee (three of them are Irish)
Six All Blacks but no Ireland players in world's top 20 list headed by Antoine Dupont
The story of the GAA's greatest ever minor
"I asked one question and lads slagged the arse off me!" - Johnny Sexton on Roy Keane chat
Cork GAA will have fight on its hands to hang onto top prospect
You may also like
4 months ago
Davy Fitzgerald steps down as Wexford boss after five years in charge
4 months ago
Cormac Egan's interview after Offaly u20s beat Dublin is everything that is pure about the GAA
10 months ago
Three players locked in Ireland jerseys after Thomond Park trial
10 months ago
Munster snatch defeat from the jaws of victory
11 months ago
Leinster without several senior stars for Connacht after positive Covid-19 tests confirmed
1 year ago
Josh van der Flier recalls first Leinster training session with Brian O'Driscoll
Next Page