"One of the most incredible tries I've ever seen."

Henry Arundell took 12 seconds to run 98 metres and beat five Toulon defenders, on Sunday, and score one of the greatest tries club rugby has seen in years.

The 19-year-old London Irish fullback picked up the ball deep inside his 22 and set off on a slaloming run that ever saw him twice slow down to step a defender or lure him in before turning on the afterburners. 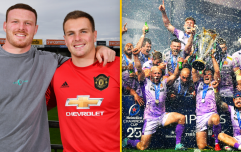 How many other European Cup winners started off as their club's groundsman?

END_OF_DOCUMENT_TOKEN_TO_BE_REPLACED

That score in the right-hand corner gave the Exiles hope, but the resulting conversion was missed and Toulon ended up holding on to advance to the Challenge Cup semi-finals. London Irish will focus on trying to end their regular season on a high, against Bath, and hoping results elsewhere help them make the Premiership playoffs.

A lot of the focus, certainly early in this game week, was on that Arundell fizzer, and the player himself. Although he lined out for England U20s in the Six Nations, he is eligible to line out for Wales and Scotland in Test rugby. An international bow seems only a matter of time.

On the latest House of Rugby [LISTEN from 1:05 below] Sean O'Brien and Alex Goode spoke about that Henry Arundell try, and the 19-year-old's potential to do great deeds in Test rugby.

'Only special players are able to do something like that' - O'Brien

With London Irish since 2019/20, Sean O'Brien has seen Henry Arundell making his first strides within the Exiles' senior squad.

"He's one of those guys that you've seen around, for the last two year," says O'Brien, "and he looks like an athlete.

"For such a young guy, he's big, he's strong, he's incredibly quick. He's running like 10.5 metres per second, constantly. He's the quickest player, by far, that we have. His attacking capabilities are absolutely phenomenal. You just saw that against Toulon. Only special sort of players are able to do something like that.

"He is special. He has a lot of learning that he has to do. He has to grow into that [fullback] role. But his attacking armoury is phenomenal."

Alex Goode was blown away by Arundell being able to turn the speed switches on, off and on again in the space of that blitzing run, and the fact that his run took nothing out of him.

"Not many people that quick have that sort of stamina," the Saracens star observed. "It was a freakish try.

"I was chatting to one of the London Irish physios and he said Henry just goes into the gym and will just do a CMJ [Counter Movement Jump] test, smash it out of the park and just go, 'Oh, is that good?'. Just unaware of how gifted he is."

Understanding how good he is, and how much better he can be, is something O'Brien wants Arundell to really dig into, and embrace, in the coming years.

"If he gets all those bits and pieces of his game right, he could be really phenomenal," the Ireland legend says. "He could be one of the world's best players. It's about how he develops over the next while.

"When he got to the [Toulon] 22, did that little in and out and then put the hammer down, again, that was the most impressive thing for me... to do that and gas to the line, I was like, 'Oh my good gosh, this is freakish!'"