The pair could be starting together, this weekend.

Although he will always cherish the England jersey he made a try-scoring debut in, Henry Arundell absolutely loved the post-match gesture from Owen Farrell.

It was a strange day out for Eddie Jones' men in Perth, last Saturday. They squandered a 14-6 lead against 14-man Australia to lose their first Test match against them in eight outings. And yet, there was a hugely positive end-game.

Arundell was given seven minutes to make his debut and, while he was out there, an impact. He did just that, torching the Wallabies backline on his first carry in Test rugby to get over for a brilliant try:

The 19-year-old then made another carry that almost got him over the tryline and sucked in a bundle of gold jerseys, opening a gap for fellow 'finisher' Jack van Poortlviet to snipe over and score. England still lost 30-28, but a marker had been laid down for the Second Test.

END_OF_DOCUMENT_TOKEN_TO_BE_REPLACED

Following that game, Owen Farrell approached Henry Arundell in the 'away' changing room and presented him with his extra jersey. Most Test players get an additional jersey to swap with the opposition, but Farrell wanted to give the London Irish youngster an extra memento.

"It's great to score a try," Arundell said, "but guys like Owen Farrell have almost played 100 Tests and that's the goal for me, to be at that sort of level.

"Owen gave me one of his shirts after the game to say well done. There's a mutual understanding that great, that's happened, but the Test series is the main thing - and winning the World Cup next year." 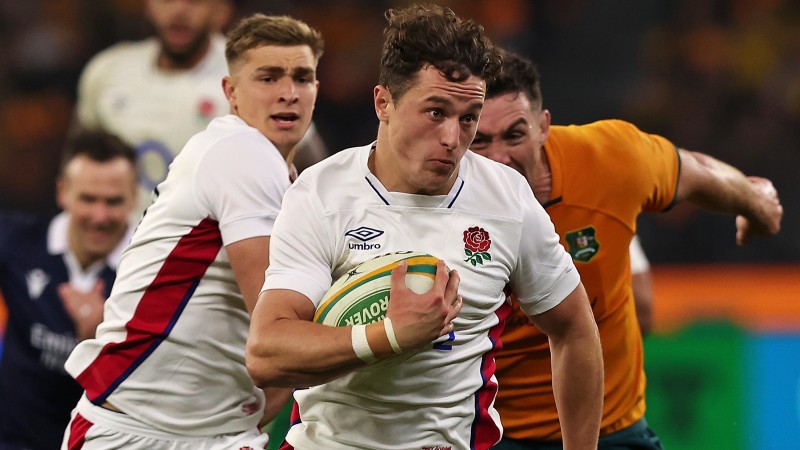 END_OF_DOCUMENT_TOKEN_TO_BE_REPLACED

Heading into Saturday's Second Test in Brisbane, Eddie Jones has some selection questions to mull over, before Thursday's team announcement.

Tom Curry [concussion] and Charlie Ewels [knee] are already heading home, and winger Jonny May is still recovering from a recent positive test for Covid-19. Lewis Ludlam is a straight-swap option for Curry, but we would go with Bath's Sam Underhill. Michael Hooper made hay, last weekend, but Underhill would give the Wallabies a lot to cope with, particularly at the breakdown.

We would also start Henry Arundell. Not only because it is well worth rewarding a hot, young player after a promising debut, but because he is the last person Australia would want to see pelting at them. As the years go on, the footage of Arundell's every move will be available to dissect.

He only has 314 minutes over 10 big games [two starts] for London Irish and three starts for England U20s. He is a relatively unknown prospect and he has blazed in 12 tries in his debut season. He prefers to play at fullback, but Freddie Steward stays there and Arundell gets a big bite at the cherry on the left wing.

That is how we would play it, anyway. As we all know, though, Eddie Jones marches to the beat of his own drum.

OUR ENGLAND TEAM TO FACE AUSTRALIA

You may also like
5 days ago
"Everything’s done for you" - Eddie Jones on how private schools influence English rugby
1 week ago
Faf de Klerk knocked out after horror collision with knee of All Blacks winger Caleb Clarke
1 week ago
"We'll support him in any way we can" - Wallabies captain Michael Hooper backed for brave mental health decision
1 week ago
At a time when rugby needs genuine characters, Naitoa Ah Kuoi could not have timed it better
1 week ago
Eight Ireland players make final cut in 'World Class' 33-man squad selection
2 weeks ago
"There's no magic wand. A lot of it starts and finishes with hard work" - Ronan O'Gara
Next Page