"The Irish management obviously have high regard for him."

Back in October, Harry Byrne jumped the outhalf queue ahead of the likes of Billy Burns, Joey Carbery, Ben Healy and his older brother, Ross.

The 22-year-old had made his senior Ireland debut in a whopping summer 2021 victory over the USA. Ahead of the Autumn Nations Cup games against Japan, New Zealand and Argentina, we had a chance to hear from Ronan O'Gara on that set of games.

END_OF_DOCUMENT_TOKEN_TO_BE_REPLACED

During a group interview, that covered a range of topics, the former Ireland outhalf, and current La Rochelle coach, gave his take on Harry Byrne being groomed for a stint in the No.10 jersey.

"I think what Harry Byrne needs to do is place himself consistently on a rugby pitch," said O'Gara.

"The Irish management obviously have high regard for him and he's been announced in the squad and they're looking to give him an opportunity, but it's very hard for the Irish management to do anything if the player himself can't present fit on the Monday of a Test week.

Not long after those O'Gara comments, Byrne did get his second cap in another healthy home win, over Argentina this time. Injuries have struck again, though, to impact on his season, and his Test ambitions.

END_OF_DOCUMENT_TOKEN_TO_BE_REPLACED

Against Benetton Treviso, this afternoon, Byrne lasted only 31 minutes before he had to be replaced by winger Dave Kearney. He went off clutching his ribs after first receiving treatment on the pitch.

Having more than doubled his game minutes for Leinster, over his past four games, all involved with Byrne will be hoping his latest set-back does not sideline him too too. 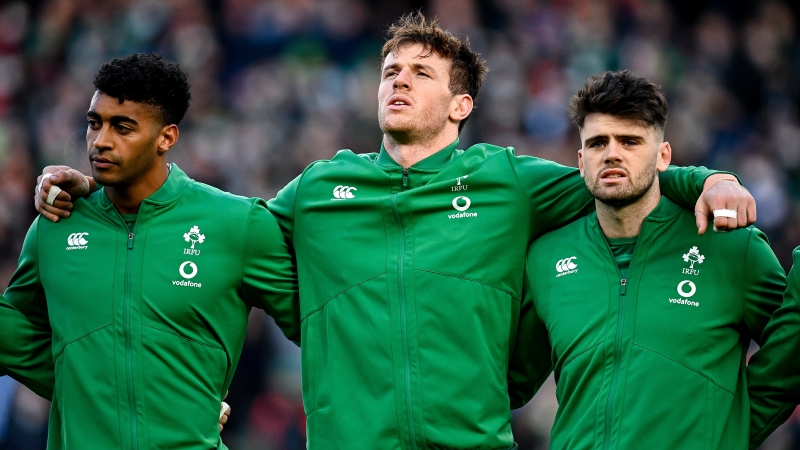 Ireland players, from left, Robert Baloucoune, Ryan Baird and Harry Byrne during the national anthem before the Autumn Nations Series match against Argentina, in November 2021. (Photo by Seb Daly/Sportsfile)

END_OF_DOCUMENT_TOKEN_TO_BE_REPLACED

The loss of Harry Byrne did little to slow the Leinster juggernaut in Italy, this afternoon.

Leinster beat Treviso 61-17, with hookers Sean Cronin and James Tracy getting two tries apiece, and fullback Jimmy O'Brien helping himself to a double, too. That victory sees them leapfrog Ulster, who hammered Cardiff in Belfast on Friday night.

The end of the Six Nations, in just over a fortnight, will see the club seasons ramp up with big United Rugby Championship and Champions Cup fixtures coming thick and fast. Leinster will issue a Byrne update in due course, but both they and Ireland do seem to feel he is worth investing a lot of time and effort in.

In the past week, both he and his older brother Ross were among a swathe of Leinster players to sign contract renewals. Ronan O'Gara certainly does see potential in the Dubliner. During that same interview, late last year, he said:

"Harry seems brave. He seems willing to have a go. He seems to trust his instincts and seems capable of getting his backline going. He seems fast and looks a good game manager.

Can't have one without the other. Fans, coaches, teammates and Harry Byrne will hope the latest injury does not keep him away for too long.


popular
Get him a tuxedo, give him the All-Star and for crying out loud, someone bring that man out to America
Fans react to Tottenham Hotspur's 'brilliant tease' for Richarlison signing
Tiernan Kelly and three other players hit with ban following tunnel brawl
Southampton pay tribute as Shane Long leaves the club after eight years
Quiz: Name the players these famous footballers played alongside the most times
The race to be the championship's top scorer this season is unbelievably close
The four stone-cold certainties for All-Stars even as early as this
You may also like
2 days ago
Gavin Coombes one of four Irish players to push themselves into Test picture
2 days ago
Bundee Aki understandably emotional, as Ireland pay moving tribute to late Sean Wainui
2 days ago
Full Ireland player ratings after Maori All Blacks teach us an early lesson
3 days ago
"We could lose all five games" - Darren Cave with a rare take on Ireland's chances
3 days ago
Irish provinces discover their pool stages fate for Champions and Challenge Cups
3 days ago
Mike Lowry and Peter O'Mahony in First Test contention as Ireland shuffle deck
Next Page