Gordon D'Arcy could not resit the playful dig at Andrew Trimble as the former Ulster star questioned Leinster's patchy form since the turn of the year. Since 2009, Leinster have won four European Cup titles and the drive for five continues at the Aviva Stadium on Sunday.

D'Arcy played in the 2009, 2011 and 2012 final victories and he feels Leinster have a great chance of making it five European triumphs in Newcastle, this May.

D'Arcy and Trimble contested that 2012 final, at Twickenham, but shared the same green jersey on many occasions.

Ahead of the Champions Cup semi-final between Leinster and a rejuvenated Toulouse, the former Ireland teammates returned to the Aviva Stadium in new roles - interviewer and rugby columnist. D'Arcy stresses he is not a journalist, rather an expert on the game that regularly shares his take in a column (Irish Times) or as a pundit on TV.

The former centre nearly sank his rugby career after a promising start but he went on to be a key figure in highly successful Leinster and Ireland teams.

The Wexford native is coming on four years retired and he told Trimble - on Baz & Andrew's House of Rugby - about the moment he knew he was finished as a rugby player. 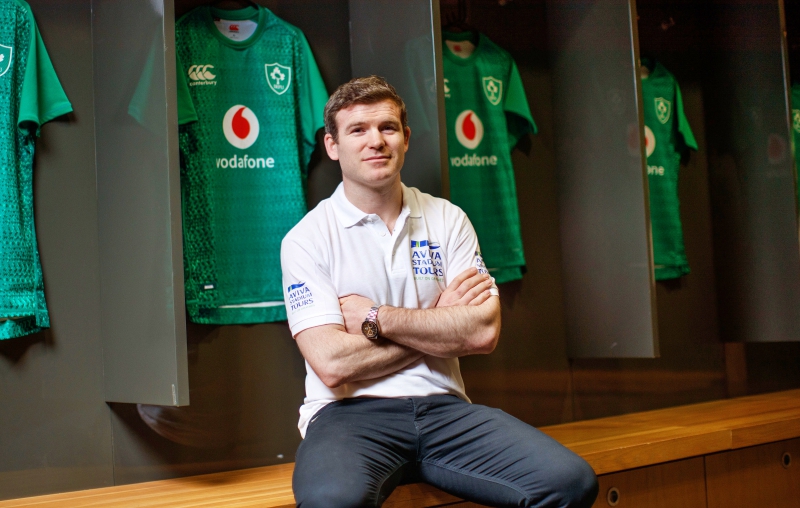 END_OF_DOCUMENT_TOKEN_TO_BE_REPLACED

D'Arcy was only 19 when he made his Test debut for Ireland at the 1999 World Cup. He was tipped to be one of Leinster and Ireland's leading lights but he only picked up four more caps until he came into Eddie O'Sullivan's Six Nations squad in 2004.

He believes that early failure to launch was one of the reasons he often enjoyed a spiky relationship with the press.

"My whole thing when I was playing was, I had a very bumpy start to my career. I went up, acted a bit of a Jack the lad, did all that stupid stuff that I did - dyed my hair blue, wrote silly stuff on my boots, got fat an, rightly so, got dumped from the national team, and nearly lost my Leinster contract.

"I had been asked to go on tour (to South Africa in 1998) when I was in school and played in the 1999 World Cup, but I was overweight and wasn't a good professional. I nearly got dropped out of it.

"It was very well documented by the sports (writers), and rightly so, but it gave me a healthy scepticism of the media. I tried to find a balance, throughout my career, of not using the media to promote everything under the sun, and not living my life in a way that I was tied to the media... so, when I had to do media stuff, I could be quite forthright with my opinion, say 'I don't want to discuss that' or 'That's a silly question'.

"That was quite frustrating for the media and I got a reputation for not liking them, but that was not the case. It was just that I was not obligated to do anything that I don't have to." 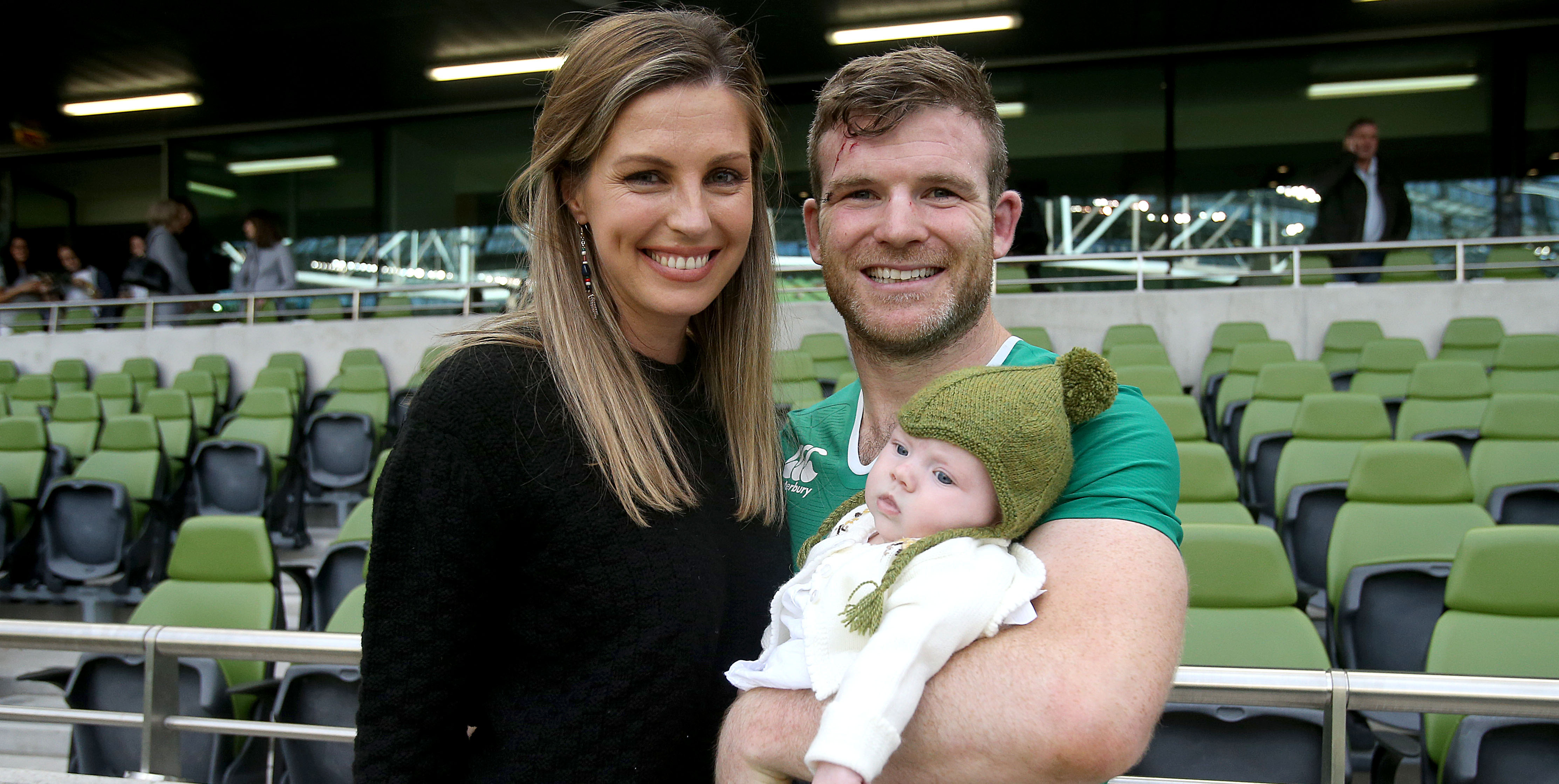 Gordon D'Arcy with his wife Aoife and daughter Soleil after his final game for Ireland. (Mandatory Credit ©INPHO/Dan Sheridan)

Once D'Arcy got that second chance with Ireland, he established himself as Brian O'Driscoll's midfield partner and represented his country in two more World Cups. He starred in many memorable Irish victories and was part of the Grand Slam squad of 2009.

He played on until he was 35 but did not get to sign off at the 2015 World Cup. He played one warm-up game - a home win over Scotland - but says he knew he was finished after that.

"The last game out there was very cathartic, because I couldn't play the game any more. The body just wasn't having it.

"We played Scotland and we were absolutely rubbish... It was one of those Joe Schmidt moves, lots of moving pieces. I made the breakthrough and it was just me and the tryline. I was like, 'I've got this, I've got this, I'm going to score'. And then I got cut down from behind.

"I thought that it must have been a covering winger but it turned out to be their tight- or loosehead prop. He had walked from that scrum to the next ruck and had still caught me from behind! That was the moment where I went, 'Oh God, I can't play rugby'. I knew I was done."

D'Arcy travelled to Galway the next day with his family and was en-route when he got a call from Schmidt, who had coached him for five seasons at Leinster then Ireland. The chat, he reckons, lasted about 30 seconds.

"Joe was like, 'Oh, mate, we're probably going to go with someone else'.

D'Arcy was asked to stay fit and ready in case Ireland needed any back-ups during the tournament. Of all the injuries they had during that tournament, Jared Payne was the only back to have his tournament ended. D'Arcy watched the tournament from home as he contemplated the next move.

He retired with a stack of accolades and medals and convinced that he had pushed himself right up to the very end.

No more looking over his shoulder for covering tackles from props, looseheads OR tightheads.


popular
The SportsJOE 12 o'clock quiz | Day 69
SportsJOE 2000s Football Quiz | Round 1
The SportsJOE 12 o'clock quiz | Day 67
QUIZ: Name the footballers to have played for Manchester United & Real Madrid
QUIZ: Name these footballers based on their former teammates
"I went up to the hotel, got attacked in the room and told I'm no longer Tipperary captain"
"I knew I didn't have the pace or strength, it was just get it and try kick it left or right"
You may also like
1 week ago
"He walks into the dressing room and Pienaar goes, ‘We can’t win’!"
1 week ago
Baz & Andrew's House of Rugby - Finn Russell on life in Paris
2 weeks ago
Ben Youngs talks about Leicester Tigers' infamous Tuesday training sessions
2 weeks ago
Ryan Baird on his physical and mental preparations to hit rugby's return running
3 weeks ago
"He's a massive human being with an unbelievable skill level" - Jean De Villiers
3 weeks ago
'They're not sure if we'll have live sports in South Africa for the rest of the year' - Jean De Villiers
Next Page