'That Farrell Ringrose combination could be the one' - Andrew Trimble

If only we had more time.

Two of the real bright spots of Ireland's season-opening win over Italy, on Saturday, were playing together in midfield for the first time. Garry Ringrose and Chris Farrell had not started a Test match beside each other before, but they were running plenty of reps together this summer.

Much as Chris Farrell fancies himself as a 13, and has proved himself there, the Munster centre looked class at inside centre. Like moths to a flame, the 6-foot-5 centre drew defenders to him and made life so much simpler for those around him.

Farrell made about four carries that sucked in at least three Italian defenders. Quicker ruck ball, on a couple of those occasions, and Ireland could have taken advantage inside the blue 22. It was not all brute strength, though.

The Fivemiletown man perfectly timed a pull-back pass to Joey Carbery that put him through a gap his own charging presence had created:

Chris Farrell with the silky-smooth handling and Carbery does the rest 🔥🔥pic.twitter.com/OnXcfVlYOg

As for Ringrose, it was another exhibition of superb handling, smart running and support lines, hard graft in defence and magic footwork to bedevil the Azzurri.

Farrell (twice) and Ringrose, with a lovely offload, both featured in the Dave Kearney try that hints at Ireland's summer work at keeping the ball alive inside the opposition 22.

Andrew Trimble and Jerry Flannery discussed the new-look Ireland centre combination on Baz & Andrew's House of Rugby [from 23:00 below] and debated whether they may be worth another game in midfield before Japan. 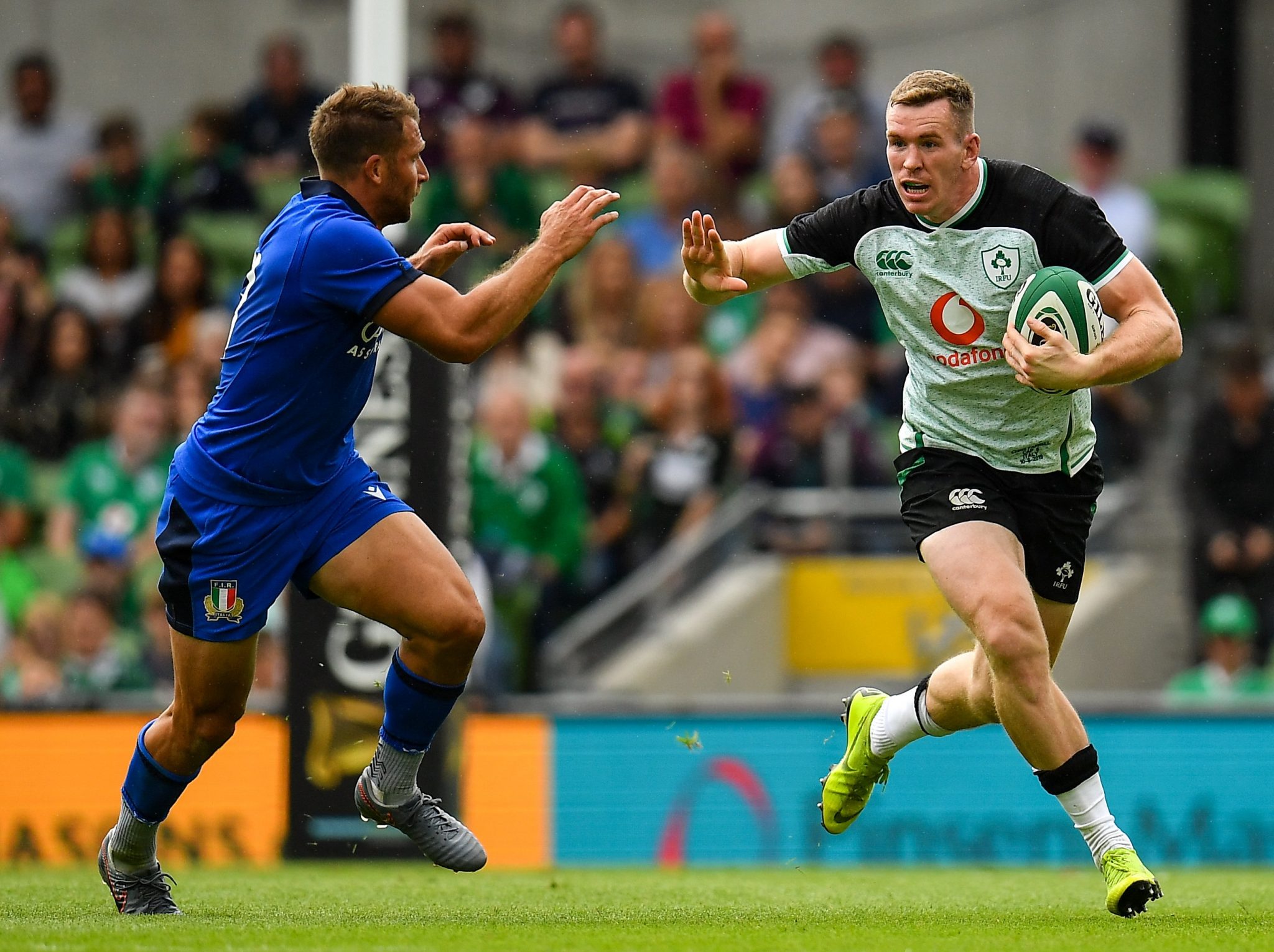 Former Ulster and Ireland winger Andrew Trimble made an early name for himself, in professional rugby, as an outside centre and he made his Test debut in a green No.13 jersey. He was thoroughly impressed by Farrell and Ringrose at the weekend. He commented:

"I thought Chris Farrell was unbelievable. Garry Ringrose… I thought the centre partnership was excellent, and I don’t think they’ve played together before. Farrell has only played 13 (for Ireland) before. So, playing out of position, I thought he was unbelievably good.

"I thought Ringrose was unbelievably brilliant. That’s no surprise as he’s always brilliant, to be fair. But it’s the first time that I’ve thought that that 12/13 combination could potentially be the one.

"Although, I know that you’ve got Bundee Aki and you’ve got Robbie Henshaw, two unable… Henshaw is typically nailed on while Bundee has played a lot of rugby in the centre for Ireland. But it was the first time that I thought that Ringrose and Farrell combination could work really well.

He added, "That’s maybe the reason why Joey (Carbery) looked so comfortable, because he had Farrell trucking it up and Ringrose outside him."

Flannery compared Farrell to former Liverpool and England forward Peter Crouch, in that people remark 'for a big man, he's got a really good touch'.

"Chris Farrell is an incredibly skilful player," said Flannery, "but sometimes you have to say to him, 'Chris, they HAVE to defend you here. Just carry the ball and you're going to take in three defenders and create space'. He's so skilful, it's getting the mix right of being physical and showing off the skills."


popular
'Make him hurt, make him yours' - How the Springboks ruled the world
In 86 seconds, Patrick Bamford becomes English football's voice of reason
Springboks legend Tendai Mtawawira tells us what he really thinks of Ellis Genge
"We did find him hours later and we made up." - How Flynn and his best friend came to blows in Croke Park
'Beast' Mtawawira is a big fan of Mike Ross' Lions front row
Jose Mourinho is about to step up and become the hero football needs
Furious Gary Neville tears into "scavengers" Glazers for Super League plans
You may also like
2 days ago
"Dorothy Wall, hands down... she's a wrecking ball!"
5 days ago
The six Lions spots being contested by Ireland and Scotland players
5 days ago
Rating the chances of Leinster's 16 Lions hopefuls
6 days ago
Jamie Carragher on how close he came to Ireland call-up
1 week ago
Full player ratings as Ireland dismantle Wales in Six Nations opener
1 week ago
Munster and Irish rugby almost lost out on one of their brightest stars
Next Page