Fair play to for saying it.

There was an interesting moment during Ireland's exhaustive attempts to break down the French wall at the end of their Six Nations opener at the Stade de France.

As the men in green entered phase 25 of a gruelling 41, soon-to-be hero Johnny Sexton could be seen lying on the pitch, stretching his legs.

END_OF_DOCUMENT_TOKEN_TO_BE_REPLACED

There were two possible conclusions: either Sexton was pretending to have cramp to throw the French off at a pivotal moment in the game, or he was genuinely trying to stretch out a bit of cramp because he knew he might have one last kick coming up.

Whatever it was, it clearly worked, as he nervelessly kicked Ireland to a thrilling 15-13 victory in Paris. Following the game, the Leinster fly-half was accused by the more sceptical corners of the France squad of faking cramp in a distracting piece of gamesmanship.

Teddy Thomas, whose second-half try had set France on course for victory, said: "We know that he is capable of everything. He is one of the best 10 in the world, if not the best. Just before [his kick], we saw him on the ground with cramps. So he hid his intentions well." 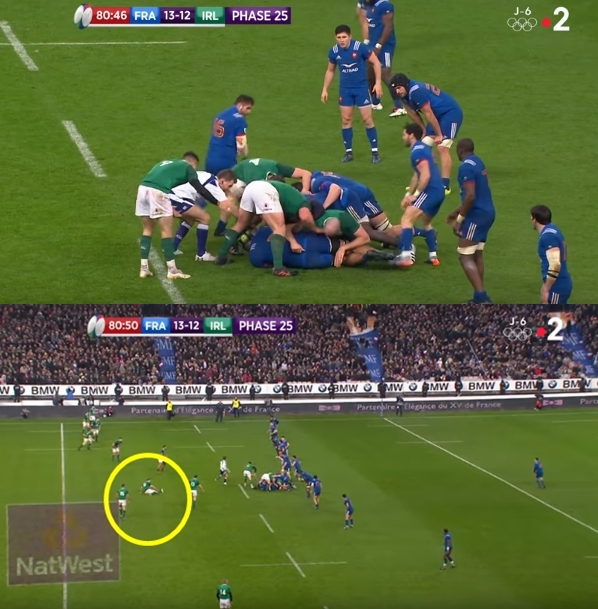 "He's not a cheater, he's a champion," the 23-year-old Montpellier man said via a French outlet. "He had cramps and it suddenly improved for him. He took his shot well."

END_OF_DOCUMENT_TOKEN_TO_BE_REPLACED

Considering the manner in which France had what would have been a momentous victory snatched away from them in the dying embers, it was remarkably gracious of Camara to come out and heap praise on Sexton.

During his post-match comments, Ireland manager Joe Schmidt had revealed that Sexton had to fight off cramp and fatigue towards the end of the game but, considering his match-clinching heroics, we hope he's refreshed and raring to go for the visit of Italy to the Aviva Stadium on Saturday.