Leinster winning the French over with their up-tempo rugby.

Back in February [far too early, but there's no convincing some people] the EPCR announced its' long-list for European Player of the Year. Thankfully, Caelan Doris was on it.

Making up a list for the best player of a tournament before the knockout stages may smack of prematurity, but four of the 15 nominees are set to be involved in the final, on May 28, in Marseille:

END_OF_DOCUMENT_TOKEN_TO_BE_REPLACED

Now that we are down to a final two, that list will be amended to a 'short' one of five. One of the beaten semi-finalists could make that shortlist - Antoine Dupont and Gael Fickou were on the initial list - but someone like Victor Vito, James Lowe or Johnny Sexton could be a decent outside bet.

When it comes to the Rugby Players of Ireland Players' Player of the Year award, this Wednesday, Josh van der Flier may pip Caelan Doris to it. In Europe, it could be Doris finishing the season with an accolade previously won by Sean O'Brien [2011] and Rob Kearney [2012]. 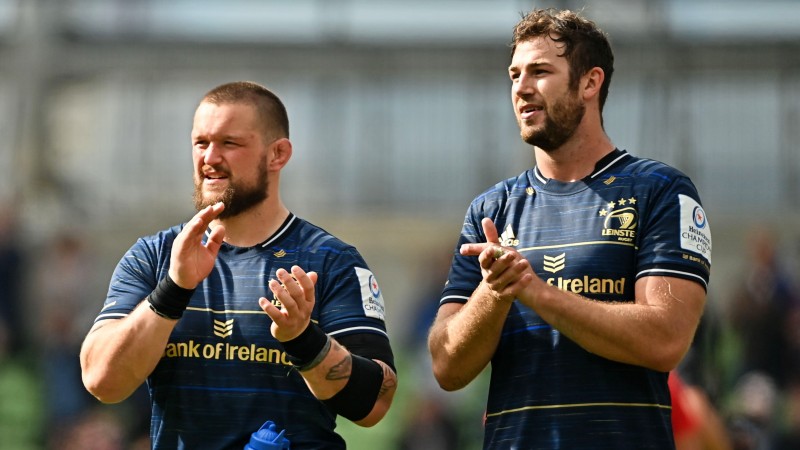 Andrew Porter, left, and Caelan Doris of Leinster after the Heineken Champions Cup Semi-Final match between Leinster and Toulouse at Aviva Stadium in Dublin. Photo by Ramsey Cardy/Sportsfile

END_OF_DOCUMENT_TOKEN_TO_BE_REPLACED

On Saturday, Caelan Doris put in a performance similar to the one he delivered, in a green jersey, against the All Blacks, last November.

This was Doris at his finest - 80 minutes of full-throttle graft and moments of real impact. He made 11 carries for 44 metres, which included one clean break, and his only real blip was tossing an offload at Hugo Keenan before he was set.

END_OF_DOCUMENT_TOKEN_TO_BE_REPLACED

Many of the Munster forwards garnered praise for the turnovers they gained against Toulouse, in an epic quarter final, last week. Doris and the Leinster starting pack finished with 0 turnovers - maybe because they were too busy hogging the ball themselves and cutting Toulouse to pieces with runners shaping and bursting from all angles.

Covering the game for French outlet Rugbyrama, Nicholas Augot named Doris and the four 'top' players from the game, which finished 40-17 to Leinster. All four 'top' players were in blue - Doris, James Lowe, Johnny Sexton & Robbie Henshaw - while Toulouse had had four 'flops'. On Doris, the outlet declared:

'It is difficult not to only pick out one player from the Leinster back row, who delivered an exceptional performance. Nevertheless, Caelan Doris was omnipresent for 80 minutes. A real poison at the breakdown, which did not allow Toulouse to have quick releases.'

Elsewhere in the same outlet, Marc Duzan raved about the free-flowing, relentless Leinster attack. 'It was strong, it was beautiful,' Duzan declared. 'It was Playstation rugby, which contrasted sharply with the boring era of Joe Schmidt'.

Poor Joe Schmidt caught in the crossfire. The Kiwi would probably point to winning two European Cups in his three seasons as Leinster head coach.

Leinster may be more exciting to watch now, but they could do with backing up the consistency of form with another cup-winning star to go above their crest.


popular
Liverpool set £60m Mo Salah price as contract talks continue
Two All-Ireland quarter-finals to be streamed exclusively live on NOW
Éamonn Fitzmaurice explains Aidan O'Shea's best position and how it can be used against Kerry
QUIZ: How many of the 10 most successful football counties can you name without making a mistake?
Matt Le Tissier says he asked Sky Sports why they never sacked Jamie Carragher
Patrick Vieira claims he was 'much better' than Roy Keane in new interview
Conor McGregor and Floyd Mayweather 'in talks' about a rematch
You may also like
4 days ago
Stormers' Hacjivah Dayimani still celebrating URC triumph in full kit, four days later
4 days ago
"Brave" Harry Byrne backed to lay down World Cup marker in New Zealand
5 days ago
"It's pathetic!" - Romain Ntamack defended after changing room footage criticised
5 days ago
"I just remember the room erupting!" - Nick McCarthy on coming out to his Leinster teammates
5 days ago
Danny Care and Billy Vunipola make 36-man England squad for Australia
6 days ago
"I was never supposed to be here" - Emotional Ellis Genge reflects on Leicester's league triumph
Next Page