"I was sitting at home going, 'Take the shot!'" - John Hayes

"You knew it was coming but that still doesn't make it easy to stop."

John Hayes knows how achingly tough it is to go to Paris and turn the French over.

'The Bull' was part of the Ireland team, back in 2000, that ended a losing streak stretching back to 1978 with a stunning 27-25 win. He faced Les Bleus in Paris another six times after that, though, and lost each time.

END_OF_DOCUMENT_TOKEN_TO_BE_REPLACED

Hayes was sitting at home, in Bruff, on Saturday and watching the latest generation of Irish stars as they sought to topple a fine French side on their home patch.

On the latest House of Rugby URC [LISTEN from 2:30 below], John Hayes spoke with Greg O'Shea, Megan Williams and Jason Hennessy about Ireland's gutting defeat to France, and that late decision to kick for points, rather than go for an attacking lineout. 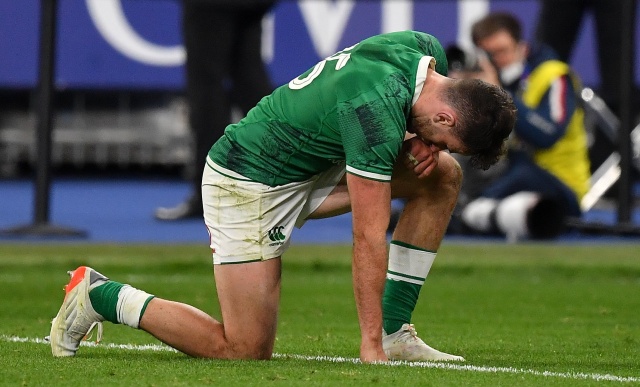 Hugo Keenan of Ireland reacts after a France try, which was subsequently disallowed, at Stade de France. (Photo by Brendan Moran/Sportsfile)

END_OF_DOCUMENT_TOKEN_TO_BE_REPLACED

Having battled back from deficits of 10-0 and 22-7, Ireland were awarded a penalty by referee Angus Gardner with eight and a half minutes of time remaining.

Andy Farrell's side, captained on the day by James Ryan, were 27-21 behind. Ryan, after a brief consultation with teammates [Conor Murray and Joey Carbery both looked keen on the penalty kick option], pointed to the posts.

END_OF_DOCUMENT_TOKEN_TO_BE_REPLACED

Carbery slotted over the kick, but many supporters and pundits felt, at the time, that they should have kicked for an attacking lineout and went for what could be the go-ahead score. That sense was only heightened when France responded with a penalty of their own, and Ireland could not find a late try.

Following the game, former Ireland players Shane Horgan and Brian O'Driscoll both advocated going for the attacking lineout. John Hayes, however, was of a similar mind-set to Ryan, who said in his post-match comments that Ireland backed themselves to get the three points (or more) in the final eight minutes. Hayes commented:

"I remember sitting at home, watching it, and going, 'Take the shot. Take the points'.

"There was still enough left in the game. Maybe if it was 76 or 77 minutes [gone], you're looking at it different.

"I think they genuinely felt that they had a good kicker [in Carbery] that would get the penalty, and they presumed they'd get back down there at some stage and chase the try. Maybe go for that win. That's a sign of how confident and positive on the field they were. They felt they could back up again. They knew in that game, out there, that they could get back and score again."

As it transpired, Melvyn Jaminet almost crossed for what would have been a huge try - putting Ireland eight points behind - but Dan Sheehan held him up. The France fullback did kick a penalty to make it 30-24, but Ireland still had 90 seconds left to fashion a scoring opportunity.

France won the restart but Iain Henderson made an incredible rip to secure them the ball, just 30 metres from the France tryline. That was as close as they go, as poor passes and kicks let France off the hook.

"That's a sign of how confident they were," Hayes added."They did go for it and were not afraid of those French forwards."

With the games now in the record books as a third straight France win over Ireland, Farrell's men will have to target three closing wins and hope Les Bleus falter elsewhere.