It was a literal case of amateurs versus professionals at Stade Ernest Wallon, this afternoon, as the powerhouse French went through Ireland for a short-cut.

It is always worth noting, when Ireland play France, England and now Wales, that this is a fully professional side taking on a team of amateurs and some that are part-time with clubs abroad or in the Sevens programme.

END_OF_DOCUMENT_TOKEN_TO_BE_REPLACED

That is the reality we are dealing with, but it must be mentioned. As for the match itself, France absolutely shredded Ireland and outgunned them in most aspects of the match.

Melissande Llorens bagged France's first try after 11 minutes when she rode an Eimear Considine tackle and got over in the corner. Caroline Drouin, who had no luck with conversions, kicked a couple of penalties and France were 16-0 up, after 23 minutes, when the visitors' scrum crumpled and Laure Sansus nipped over on the blindside.

Audrey Forlani scored off the back of a rolling maul that caused Ireland such trouble that Sam Monaghan was left defending it on her own, at one point. Just before half-time, the hosts had their bonus point when Clara Joyeux crashed over, despite the best efforts of Neve Jones. 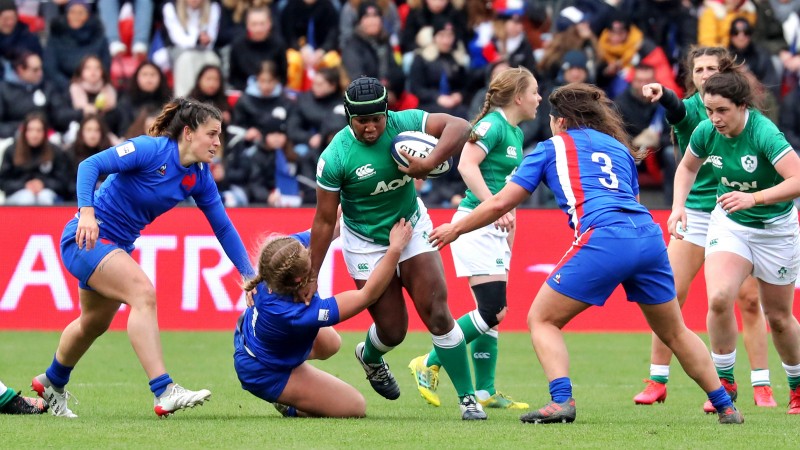 END_OF_DOCUMENT_TOKEN_TO_BE_REPLACED

Ireland held out for eight minutes of the second half, but more scrum dominance saw Sansus cut inside and dive over for her second, although Dorothy Wall was certainly obstructed by a French player in the process. Drouin finally landed a conversion [fifth time lucky] and it was 33-0 with 30 minutes to go.

After 55 minutes came the score of the match. It came from Ireland, too.

END_OF_DOCUMENT_TOKEN_TO_BE_REPLACED

Greg McWilliams' side went over 30 phases, for a drive that lasted just under four minutes, and work their way 60 metres up the pitch - with Stacey Flood and Brittany Hogan featuring prominently - before Eve Higgins stepped Sansus to get over the tryline.

That try, although Nicole Cronin missed a simple conversion, spurred a raft of French replacements, while McWilliams freshened up his line-up with Kathryn Dane and Hannah O'Connor on for the final push.

For that final push, it was France doing most of the pushing, shoving and shunting. The Irish scrum was getting mashed and their insistence in trying to run balls out from their 22 was doing them no favours. France were lapping it up. On yet another turnover, France spread the ball wide left and fullback Emilie Boulard cantered over for the home side's sixth try.

Both sides played deep into time added on - France seeking to pad their winning margin and Ireland in need of a consolation. There was a late yellow card for Boulard before, somewhat fittingly, the game ended with a botched Ireland lineout.