With Rory Best's exit stage left after yet another disappointing Irish World Cup campaign, Ireland are light on captaincy but not short of candidates to replace the Ulster hooker.

It's a new start, a new era, a new four year cycle. But who should step into Best's shoes? Should Ireland pick a captain they know will be in the mix for the World Cup in 2023? Should there be a more senior captain in place to see through what will inevitably be a period of transition?

Jerry Flannery dug into the issue on Episode 10 of The JOEpan Rugby Show, and was pretty clear that whoever takes over the captaincy needs to be someone who will definitely be on the field game in, game out;

"Well when you're looking at who your captain is going to be, first of all he has to be guaranteed on the team. And I think looking through it at the moment I'd say your guarantees at the moment are probably Tadhg Furlong, they're oprobably James Ryan, Conor Murray, Johnny Sexton fits that role as well. Obviously his age profile would be against him."

There are a number of key candidates, but Fla reckons there's no need to be picking a captain now with 2023 in mind;

"But the idea that we have to pick a captain now to be captain at the next World Cup, I think is a big stretch. Because if we have a... We had a poor 6 Nations last year and people started to lose their minds, so the idea of just discounting a 6 Nations and just saying that we can just focus on the next World Cup, it's false, it's not reality. So maybe Johnny Sexton is the easiest guy to step up and get him as captain, because you know he's going to be your first choice, you know he's proven at that level, you know he has the respect of everyone else within the squad. James Ryan would be another option, but possibly... he's inexperienced, I don't think he's captained Leinster. So, it might be a little bit early for him but he'd definitely be, over a 4 year cycle, he's definitely a guy that could work into becoming a captain down the line. So, maybe Johnny is probably the standout guy at the moment. Peter O'Mahony is there in the mix as well, who has captained Ireland as well, but he's got to... again, selection has got to be a non-negotiable." 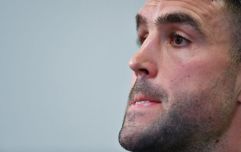 END_OF_DOCUMENT_TOKEN_TO_BE_REPLACED

Whoever Andy Farrell decides upon ahead of the opening 6 Nations game against Scotland in Dublin on the first weekend in February, it's clear that it needs to be someone with experience and that will be expected to be one of the first names on the teamsheet every time out.

On Episode 10 of The JOEpan Rugby Show, Rob O'Hanrahan and Jerry Flannery look forward to Ireland's new management team, what Ireland need out of the 2020 6 Nations and preview the World Cup semi-final between Wales and South Africa. WATCH below:


popular
"If Murray is playing that first half for England, he's probably Man of the Match"
Jacob Stockdale and Johnny Sexton not spared by English press
Baz & Andrew's House Of Rugby - Twickenham carnage
Triple Crown wrenched away as England scrape Ireland off their boots
'Were they up for it more than us? That's my responsibility' - Andy Farrell
ROG hits the nail on the head assessing Ireland's performance
Tyson Fury reveals what happened when he sparred Anthony Joshua
You may also like
1 day ago
Jacob Stockdale and Johnny Sexton not spared by English press
2 days ago
Ireland lose mental battle, as scars of 2019 rear their head again
2 weeks ago
Johnny Sexton says "outstanding" Conor Murray's box-kicks won Ireland the game
2 weeks ago
Romain Poite "brilliant to deal with" - Sexton
2 weeks ago
Johnny Sexton on what was said at Ireland's Friday night meeting
1 month ago
Only three Irish inclusions in 'world class' 31
Next Page