Fiji faced off in a do-or-die match against Georgia at the Hanazono Stadium.

Fiji came into the game off a shock loss to Uruguay whereas Georgia had dispatched Uruguay a few days ago to set up an enticing showdown in this Pool D matchup.

The Fijians began with their ceremonial Sibi war dance before the ref blew for kickoff.

12 minutes into the encounter and it was the Pacific islanders who were awarded a penalty. Matiashvili stepped up, kicked and appeared to score after the kick judges initially raised their flags but a TMO review later ruled that the penalty was actually missed.

19 minutes in however, and the Fijians took the lead courtesy of Nayacalevu. After a seemingly harmless kick which Georgia appeared to give up, Radradra showed sagacity to pursue the ball before passing it for the score. Volavola promptly converted for a score of 7-0 in what turned out to be a body blow to the Georgians.

34 minutes into the encounter and Georgia fougth back after a penalty was awarded and this time, Matiashvili converted belong any shadow of doubt. Georgia had a lifeline into the game and rightfully so. 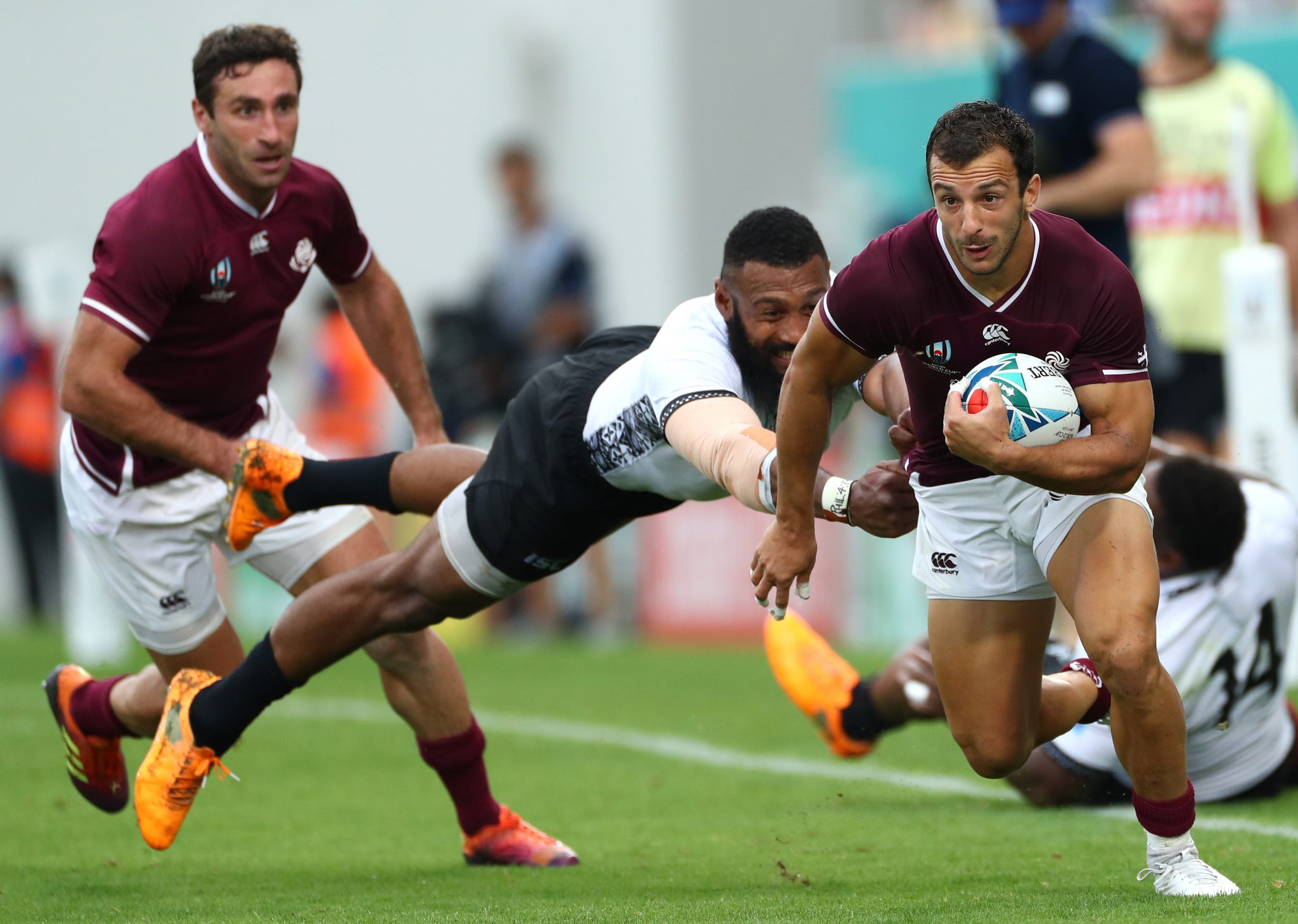 Halftime arrived bringing an end to a tough, tense encounter. Georgia did well to shut down several Fiji counterattacks but Fiji looked solid up top and especially dangerous out wide.

43 minutes in and Fiji extended their lead with another try as Lomani finished off a terrific move after stellar work from Radradra out wide. The missed conversion bought the scoreline to 12-3 to the Fijians.

Fiji would soon extend their lead a few minute later with another try. Radradra got his third assist after shrugging off a tackle to feed Tuisova. The scoreline read 17-3 after the missed conversion.

3 - Semi Radradra has become the first player at #RWC2019 to make three try assists in a single game, the joint-most ever by a @FijiRugby player in a World Cup game. Excellent.#GEOvFIJ pic.twitter.com/2okjDf24ct

Georgia certainly did well to not take the score lying down and they responded with a rapid counterattack to score a try. Veteran Gorgodze grabbed the ball and got it over the line setting up an interesting, tense bout as the game entered the final quarter.

61 minutes in and Fiji scored off of Radradra after strong work out on the wing again. Volavola converted to put the score at 10-24 to the Fijians.

68 minutes in and Fiji began to pull away with another converted try as Kunatani did the honours. Just two minutes later and in a cruel blow to the Georgians, Ratuniyarawa landed another try after being found by Lomani. Volavola scooped up the conversion for a commanding score of 10-38 to Fiji as the game neared its end.

With five minutes left to play for, Fiji landed the final blow with a try from Radradra who put in an absolute workhorse of a shift in this game and duly deserved his second try of the match. With the added conversion, the final scoreline read 45-10 to Fiji as full-time arrived.

Georgia deserve credit for their performances and given how they played, they certainly didn't deserve to be on the losing end by a margin of 35 points. As for Fiji, they put up a scintillating display of rugby in the second half to pull away from the Georgians and this performance will have improved their confidence no end heading into the massive clash against Wales next.

Semi Radradra, @Mastercard Player of the Match for #GEOvFIJ

- Ran for 177 metres (most of the tournament so far)
- Had five clean breaks (most this match)
- Two tries (most this game)#StartSomethingPriceless #POTM #RWC2019 pic.twitter.com/NXAZs6UY7L

You may also like
6 months ago
Devin Toner on thoughtful Ronan O'Gara message after World Cup heartache
6 months ago
"It was a complete and utter shock when Joe's name came up on my phone" - Devin Toner
6 months ago
Sinckler a stand-out, but more consistency needed - Flannery
6 months ago
"We haven't got a long-term or short-term estimate of when Joey is back" - Stephen Larkham
6 months ago
House of Rugby team agree on seven players in World Cup 'Best XV'
7 months ago
Pieter Steph Du Toit locks down World Player of the Year award
Next Page