It was a remarkable press conference. Eddie Jones entered smiling and left smiling. In between he charmed the English press and pissed off the Irish.

Fair play to Jones and his England side. They were good value for their 21-10 win and are two wins off first Grand Slam in 13 years.

The Australian is talking trash and his team are walking the walk on his behalf.

Post-match, Jones got into several tetchy back and forth arguments with members of the Irish press [including SportsJOE].

Our bones of discontent? Johnny Sexton, whiplash, Sexton's parents, Mike Brown kicking Conor Murray in the head and his players taking scalps with late, off the ball hits. 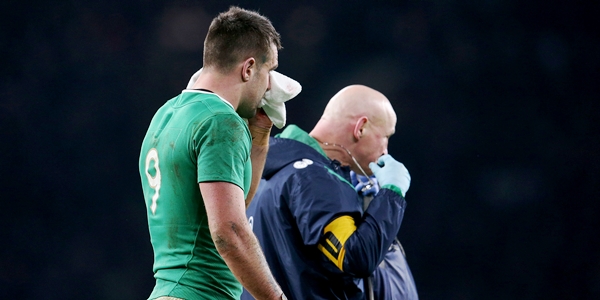 First off, Jones dismissed a question about Sexton [he said the outhalf's parents should be concerned for his health] as 'a sideshow'. Asked if he regretted mentioning Sexton's parents, he proclaimed, "I don't regret anything mate."

The Australian described Ireland as a crafty side and remarked that they 'kicked the ball less so it wasn't very Aussie Rules today'.

Next up came a question about Mike Brown taking a few reckless kicks at an Irish ruck. Conor Murray was struck three times and needed sutures applied to his eye area after the match. This is how the exchange went down:

SportsJOE: Eddie, you said James Haskell's yellow card [for a late hit on Murray] was 50/50. Do you think Mike Brown was lucky to stay on?

Jones: Look, the referee adjudicated on it mate. He said it was fair. If the ball is on the ground you're allowed to kick it, aren't you?

SportsJOE: Do you not think it was a bit reckless?

Jones: Was the ball on the ground?

SportsJOE: The ball was about a foot away from where Conor's head was.

Jones: Was the ball on the ground?

Jones: Where was it? Had he been tackled?

Jones: Then he can play the ball mate.

SportsJOE: And you don't think Brown was in any way reckless?

Jones: Are you allowed to play the ball? You tell me what the laws are.

SportsJOE: He took around three or four swings around Conor's head.

Jones: Are you allowed play the ball if it is on the ground?

Jones: Well the referee didn't think it was reckless.

Other reporter: So you are not going to give an opinion then?

Jones: Why should I?

Other reporter: That is generally what a press conference is about. We ask you for your opinion.

Jones: You can give your opinion mate. The referee adjudicated on it. If I give my opinion on the referee then the headline is 'JONES COMPLAINS ABOUT REFEREE' so I'm not going to give an opinion mate.

Jones then went on to joke [we think] that from here on out he was self-imposing a media ban.

"From here until the Friday before the Wales game, I'm not talking to the media."

Headlines will have to write themselves for the next 12 days.

Still grinning, Jones concluded, "If I don't say anything, you come away from the press conference saying 'That's boring'. If I say something then I'm scaremongering. I can't win."


popular
Michael Bisping tears into Dillon Danis for 'trying to be Conor McGregor so hard'
"We did find him hours later and we made up." - How Flynn and his best friend came to blows in Croke Park
The SportsJOE 12 o'clock quiz | Day 333
The top 10 fastest knockouts in UFC history
"Munster was like playing for your local GAA club. The craic was 90"
If ever a player would inspire you, it's Kildare's Mary Hulgraine
Six months after Michael Venom Page's flying knee fractured his skull, Evangelista Santos retires
You may also like
20 hours ago
"Dorothy Wall, hands down... she's a wrecking ball!"
3 days ago
The six Lions spots being contested by Ireland and Scotland players
3 days ago
Rating the chances of Leinster's 16 Lions hopefuls
4 days ago
Jamie Carragher on how close he came to Ireland call-up
1 week ago
Full player ratings as Ireland dismantle Wales in Six Nations opener
1 week ago
Munster and Irish rugby almost lost out on one of their brightest stars
Next Page