It was not always pretty for Eddie Jones' side, but the Test Series Down Under goes to a decider. Here are our full England player ratings after the Second Test, in Brisbane.

England hit the front with an early Billy Vunipola try and they had a choke-hold on the Wallabies for most of the first half. The hosts struggled to impose themselves on the game and conceded sloppy penalties.

END_OF_DOCUMENT_TOKEN_TO_BE_REPLACED

Four Owen Farrell penalties in a row, two apiece either side of a yellow for Australia's Izaia Perese, had the tourists 19-0 up after 35 minutes. The Aussies, injury hit last week and this, did show some fight when Taniela Tupou got a converted try to leave it at 19-7, heading into the second half.

Some Australian supporters, including former Wallabies winger, Drew Mitchell went into half-time stewing over some calls that went against their side. Television Match Official Joy Neville spoke up to referee Andrew Brace on a couple of occasions in the opening 40, leading to penalties and a yellow card going against Australia.

Mitchell did not call out the former Ireland Women's star but remarked, via Twitter, that the T.M.O was "awful". Others chimed in with their social media takes:

Who is this TMO??

END_OF_DOCUMENT_TOKEN_TO_BE_REPLACED

It is worth noting that Joy Neville did pause play to get Brace to review some extras from Ellis Genge on Nic White. She also intervened on some illegal English play in the second half.

Others, meanwhile, loved how Neville was on top of matters, and often brought the referee back to a big incident, if she felt it merited another look:

Nothing gets passed Joy Neville - nothing 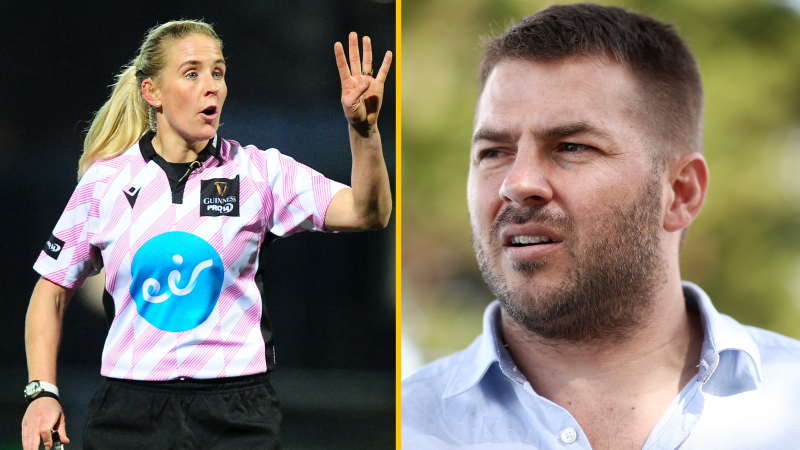 Australia get close, but not close enough

After last weekend's second half comeback in Perth, Wallabies players and fans must were buzzing when, after 48 minutes, Samu Kerevi got over for a converted try. When Marcus Smith was sin-binned for a deliberate knock-on, five minutes later, home hope throbbed.

Eddie Jones freshened up his troops and England went back to the close-in carries and hard tackling, and clear-outs that had served them well in the first half. It led to two late penalty attempts for Owen Farrell. He missed one, but landed the other and there was no way back.

Just held shy of the tryline, in the final quarter. Just behind Nowell for best attacking option in that backline.

Was a constant threat with ball-in-hand.Livelier in the first half, but showed up with a late, jinking carry that got England into scoring territory.

21 metres made off three carries, and two defenders beaten, but missed a worrying four tackles in defence.

Had a fine night off the tee, and defended stoutly. Used more of a decoy for backline moves. Never carried into contact - preferring to pass - when he got the ball, until later in the game.

A quiet enough night on the left wing. Drifted in-field a few times, seeking the ball.

Would love to see him running the ball a bit more. Still have yet to see him really cut loose. Yellow-carded after 53 minutes.

A lively outing from the scrumhalf, on his first Test start. Some good clearing kicks, and snipes.

Gave his team a lot of front-foot ball with strong carries. Solid lineout throwing, including the one that set up the rolling maul for the Vunipola try.

Another solid outing for the tighthead, in the scrum and loose.

Only played the first half after shipping a couple of blows. A few good carries when England were on top.

Only made three carries but each one gained a handful of metres. Stuck nine tackles. Kept his head down after last week's hair-pulling.

The captain was steady as a rock, in attack and defence.

Made a number of brave tackles. The shame was, one of those low dives to bring a Wallaby down saw him ship a head knock and leave the game.

Excellent as pure, attacking propulsion. Got an early try and made metres all night. Lapses were in defence, where he made six tackles but missed five.

You may also like
2 days ago
Bundee Aki angrily confronts referee on-field after red card tackle
6 days ago
"Insane" Johnny Sexton has driven this Ireland team to a whole new level - Tommy Bowe
1 week ago
AJ MacGinty and a Pat Lam promise from that was kept, six years on
1 week ago
"He would have been a phenomenal rugby player" - Jack Carty on Michael Murphy
1 week ago
Damian de Allende and Colm Cooper shared the same pre-match routine, and it worked wonders
1 week ago
"He's eating four steaks a night" - Ireland stars dish dirt on teammates and reveal weirdest rugby diets
Next Page