In the the third and final Sunday game, England opened their campaign against Tonga in a Pool C clash at the Sapporo Dome.

Coming into the game, England had opened each of the last six World Cups with a win and today would prove to be no exception. By stark contrast, Tonga had lost seven of their last 10 games at the Rugby World Cup. Regardless of their past, the Tongans were fired up for the game belting out their traditional challenge just before kick-off.

England met that challenge head on and Manu Tuilagi was the inspiration, but this was more of a grind than anything else for Eddie Jones' men:

END_OF_DOCUMENT_TOKEN_TO_BE_REPLACED

Eight minutes into the game and England were pushing forward testing Tonga's defence on occasion revealing a few frailties in their opponent's defense. England were rewarded for their efforts with a penalty as Tonga were deemed offside in midfield and Owen Farrell stepped up to drill the ball through the middle from 30m out.

14 minutes in and Billy Vunipola was thumped to the turf with a strong challenge from Zane Kapeli. The act invoked cheers from the crowd and from the Tongan bench.

Promptly after that, Tonga were awarded a penalty which Sonatane Takulua converted to level the score to 3-3.

END_OF_DOCUMENT_TOKEN_TO_BE_REPLACED

As the minutes ticked by, Tonga slowly began to impose their well-known physicality on the game and it was up to England to maintain their discipline.

In the 22nd minute, England had a try reviewed after Manu Tuilagi shot through the Tonga midfield who then passed to Sam Underhill who bundled over the line but the move was eventually ruled out as the ball was not deemed to have hit the turf. 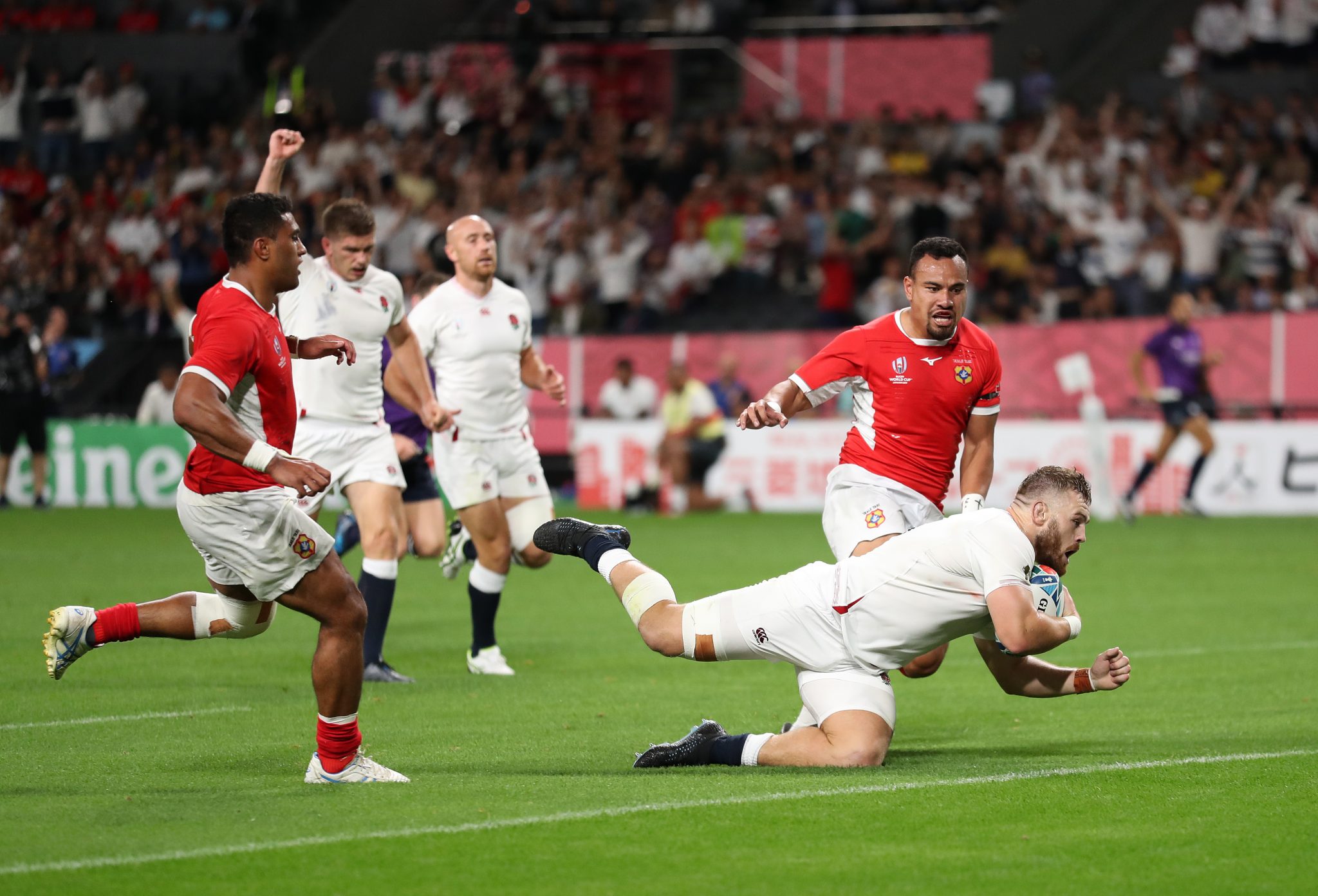 Just seconds later however, England had another try reviewed after Tuilagi who was up for the fight bundled over the line, and this time, it stood. Farrell converted to bring the score to 8-3.

Manu Tuilagi is an absolute animal of a man pic.twitter.com/xju4NrFoCN

END_OF_DOCUMENT_TOKEN_TO_BE_REPLACED

28 minutes in and Tonga rued a missed penalty as Sonatane Takulua smashed the ball left of the posts. England then delivered a blow with the precision of a Samurai sword to slice open the Tongan defense as Tuilagi fed by Jonny May trotted in to score a second try and again, Farrell gathered up the extras.

As half-time loomed, England for the third time in the first half had a try reviewed which was later disallowed but a consolation arrived in the form of a penalty which Farrell converted to take the score to 18-3 as halftime ensued.

England finished the half with a far more efficient defence even though the discipline was lacking at certain moments. Tuilagi proved to be force to be reckoned with his quick feet, rapid change of direction and strength

The second half kicked off and three minutes in and Tuilagi stormed into the midfield with the Tongans forced to concede a penalty. Once again, Farrell stepped up to convert as the points ramped up to 21-3. It was getting embarrassing for the Tongans and it would be get worse.

In the 56th minute, Jamie George added to their misery with a brilliant try after great work from George Kruis to push the driving maul over the line. Once again, in a flawless effort, Farrell converts to push the score to 28-3 to England.

63 minutes in and the stats portrayed a telling story wherein England had carried the ball for 419m in glaring contrast to Tonga's 116m.

As the game entered the final 10 minutes, Luke Cowan-Dickie smashed in a try after a gliding run from Jospeh past some tired Tongan midfielders. The score stood at 35-3 following a successful conversion.

Full-time arrived, signalling a strong 32 point deficit between the sides.

5 - England have won five games by 30+ points in 2019, no other side competing at this year's Rugby World Cup has managed that on more than two occasions this year. Ruthless.#RWC2019 #ENGvTGA pic.twitter.com/s4P5as38aQ

Tonga didn't do much to warrant any confidence going forward in this tournament. As for England, while they did put in a solid shift, their lack of defensive discipline and tendency to concede penalties might come back to haunt them against the big boys.


popular
"I never really cried or got emotional over what I've done as an individual. I couldn't give a s***"
"If I break my wrist, it's on f***ing both of you." - Koepka and Berger act the spoiled child
"I was off the grid" - Aidan O'Shea respond's to Mayo criticism after club championship win
The FootballJOE Pub Quiz: Week 7
'I won The Open by six shots in my home country, but this was the best week of my golfing career'
Garry Ringrose raves about four young Leinster stars to watch this season
Galway fans' frosty reception for Davy Fitz doesn't make any sense
You may also like
1 year ago
Sinckler a stand-out, but more consistency needed - Flannery
1 year ago
"We haven't got a long-term or short-term estimate of when Joey is back" - Stephen Larkham
1 year ago
House of Rugby team agree on seven players in World Cup 'Best XV'
1 year ago
Pieter Steph Du Toit locks down World Player of the Year award
1 year ago
Kyle Sinckler knocked out by Maro Itoje elbow after only two minutes
1 year ago
World Cup final preview - The JOEpan Rugby Show
Next Page