It was a frustrating, sapping return to competitive action at the U Arena for Racing 92 but Donnacha Ryan and Simon Zebo gave them a couple of decent memories.

Racing were absolutely savaged by Clermont Auvergene in their second Top 14 game of the season, with Greig Laidlaw chipping in with 17 points in a 40-17 victory. 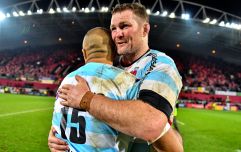 "In the big games, and big moments, he's the type of guy you need around"

END_OF_DOCUMENT_TOKEN_TO_BE_REPLACED

The Clermont pack made hay in Paris as they won penalty after penalty in the first half, with Laidlaw making them pay off the kicking tee.

15 minutes into the contest, however, and Ryan looked to gather some momentum for his team with a steam-train hit on the 20-stone Uhila. Clermont No.8 Fritz Lee threw a looping pass that left 'The Tongan Bear' exposed and his arms raised high.

Ryan launched himself at the loose-head prop just as he pouched the ball and levelled him with a resounding hit that forced a knock-on, and a turnover. The home crowd were on their feet as they marvelled at the sheer monstrousness of the connection. 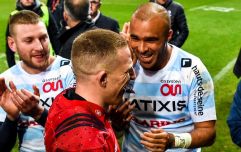 END_OF_DOCUMENT_TOKEN_TO_BE_REPLACED

On Clermont ploughed, however. A Wesley Fofana try, converted by Laidlaw, and a Camille Lopez left it 19-3 at the break.

Virimi Vakawata got a try back for the hosts but Clermont responded with scores from Damian Penaud and Peter Betham. It was 40-10 when Morgan Parra larruped over a penalty but Racing kept going until the end.

It was Zebo that got over for a consolation try -set up by Teddy Thomas - but the final scoreline will lead to much introspection from last season's Champions cup finalists.

Paddy Jackson kicked 13 points for Perpignan, on Sunday afternoon, but ended up on the losing side. Agen's Jake McIntyre trumped the former Ulster outhalf with a 15 point return that included two tries in his side's 25-23 victory.

Stade Francais - with Paul O'Connell and Mike Prendergast on their coaching staff - went top of the table with a 20-8 win over Bordeaux Beglés.


popular
Shay Given on how far Ireland could've gone at the 2002 World Cup with Roy Keane in the team
The SportsJOE Friday Pub quiz: Week 3
From Ireland to Argentina: Alexis Mac Allister's Irish roots explained
Ivan Rakitic criticised for alleged comments condemning 'gays, black people, dwarves and the obese'
The World Cup 2022 team of the tournament so far
Jack Grealish says he regrets his comments about Miguel Almiron
France demand FIFA change result of World Cup defeat over 'rule break'
You may also like
3 years ago
Peter O'Mahony comes up with huge moment on night he was proved human
3 years ago
Munster show incredible spirit to salvage draw against impressive Racing
3 years ago
'Donnacha Ryan pretty much beat us in Paris because he's just so fit'
3 years ago
Simon Zebo shows incredible footwork to set up Donnacha Ryan try
3 years ago
Dan Carter will be playing with Simon Zebo for the rest of the season
3 years ago
Simon Zebo responds to booing from the Ulster fans
Next Page