The Tipperary native feels he will always be stirred when watching a Munster game, this season, next and for plenty of seasons to come.

It has only been eight months since Donnacha Ryan left Munster. He spends most of his time in Paris, or on the road across France for rugby duty. When he gets back to these shores, he makes a beeline for home. Still, he worries that he has not been keeping in touch with the old Munster lads as much.

"There will always be a twinge," he told The Hard Yards. "I'd always love to be playing out there.

"It's like my dad. I sometimes laugh when he is watching the hurling matches and Limerick are playing. He's still hopping out of the seat, especially when they are playing Tipp. He still thinks he can do a job. His line is, 'I've never officially retired from hurling!'"

END_OF_DOCUMENT_TOKEN_TO_BE_REPLACED

Matt Ryan, the former Limerick inter-county hurler, will emphatise, then, with his son when, way down the line, they tune in to watch Munster in action.

The Ireland second row was speaking with the podcast [from 27:00 below] from his digs in Paris and he was in top form when speaking about French culture, facing his old team in the Champions Cup and his first sporting passion - hurling.

END_OF_DOCUMENT_TOKEN_TO_BE_REPLACED

Ryan was back in Ireland for the Six Nations weekend when Italy came to Dublin and left with a sound beating to brood over. Having competed so fiercely, and well, in the 2017 Six Nations, he was forced to watch on from a fan studio at the Aviva Stadium.

Asked about the quirky lineout move that involved Conor Murray jumping for the ball, Ryan claims he came up with the move years ago but was talked out of it as the Munster lads would have been tossing 'our most skillful player in the air, and maybe getting injured'. 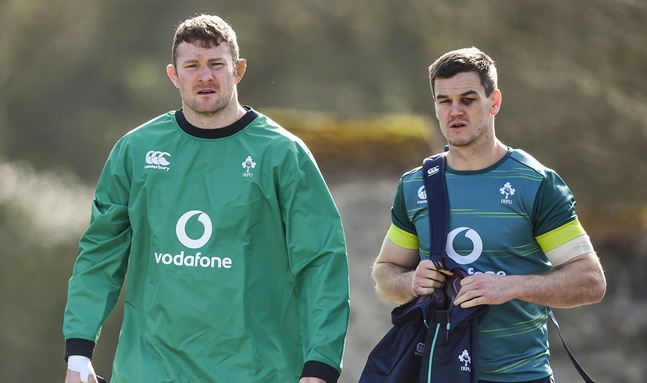 END_OF_DOCUMENT_TOKEN_TO_BE_REPLACED

Back in Paris, he is focusing on Racing as they seek to climb the Top 14 standings and prepare to go and turn over Clermont, in the Champions Cup, at the daunting Stade Marcel Michelin.

Ryan is not the first Irish player to notice a big difference between professional rugby goings on in his homeland and in the far more laid-back [or haphazard] France. He was injured for the first few months of the season but is up to speed now and making his presence felt.

In the past, that may have involved horsing and roaring lads out of it on the training pitch - "Sometimes you have to be the bad guy!" - but the 34-year-old is a lot calmer in the twilight years of his professional career. He has noticed, too, that shouting often has the opposite effect in France.

"Being a bit short with your words doesn't go down well, especially with the French fellas. We all want the same thing - it's nothing personal or anything like that - but you don't want to be rubbing anybody up the wrong way.

"At the end of the day, you have to work with all of these days. With a lot of these guys, you have to put the arm around them and offer them some encouragement. They respond better to that."

Many schools in the city take a half day on Wednesdays so Racing hosts training sessions and matches for children aged 6 to 16. Ryan took in a couple of them and copped something that he did not like.

"You'd see all the coaches parents having a right go at the kids. And at that age, you're just trying to have a bit of fun and a bit of exercise.

"The French players, on the pitch, are very quiet. Very quiet. There's very little communication. Some would say that it comes from this culture of them getting shouted at when they are very young; shouted at all the time. So they stay quiet because they don't want to disrupt any other players on the pitch.

"It sounds completely bizarre but that's what does happen. So, when the foreign guys are in when the younger lads [in the Racing senior squad] and they see them chatting on the pitch, as the play goes on it is infectious. A lot of the younger guys have started to talk a whole lot more from the start of this season than they would have.

"That encouragement and few words is good to hear... because French teams, if they go two or three scores behind, they go very quiet and put the heads down. It's very important that you keep these lads focused - 'What are we doing next?' or 'We've messed up there but what's the next job?'. Focus on that rather than worrying about a mistake or getting a grilling on Monday morning."

Ryan, by those words, appears to be taking up the mantle laid down by former Racing defence coach Ronan O'Gara. The chat levels, on and off the pitch, are destined to increase next season, too, with the arrival of Simon Zebo and Finn Russell. 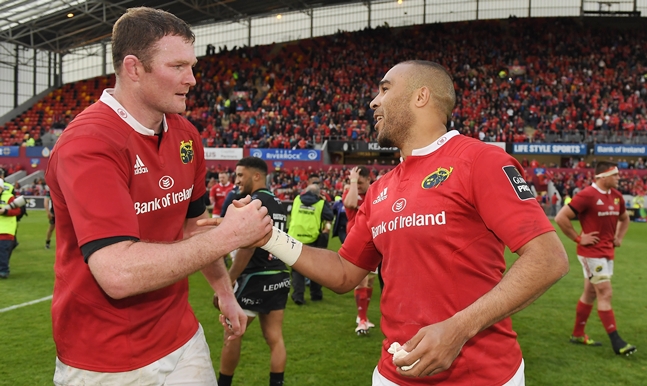 Ryan will be well settled by the time Zebo arrives and may even be able to hold heavily accented French conversations with his former Munster teammate. He is taking French lessons at the club and doing extras, as well as getting in sight-seeing around the city.

When Zebo arrives, Ryan may have someone else to puck around with.

"I probably never thought of myself as a rugby man at all, for years," he says, "I'm just a hurler trying to do a bit of rugby, at the minute. I've just taken a career break from the hurling!"


popular
"This game is going to get abandoned" - Mass brawl between Kilcoo and Burren results in six red cards
"He'll have the best seat in the house" - emotional Mageean pays tribute to late great Kiernan after the race of her life
Quiz: Which player has scored more goals for Ireland?
Teddy Sheringham says Roy Keane didn't speak to him for three years at Man United
Court hears cringeworthy poems Ryan Giggs wrote to his ex
Your guide to a huge weekend of sport and how to watch it all
"Or is she? Or is she" - Greg Allen's frantic commentary perfectly captures Louise Shanahan's outstanding run
You may also like
3 weeks ago
“My confidence was on the deck" - Aaron Connolly explains why he has made the move to Italy
3 weeks ago
Every Irish transfer in football, this summer, as several big deals get done
3 weeks ago
Six Irish players make damn impressive 'World XV' that would take some beating
4 weeks ago
The frontrunners for Ireland's 33-man squad for the 2023 World Cup
4 weeks ago
All Blacks media manager explains why Ian Foster appearance was cancelled after Ireland defeat
4 weeks ago
Warren Gatland selects nine Irish players in his strongest Lions XV, right now
Next Page