Donnacha Ryan's last game for Ireland looks set to be the rousing Six Nations victory over England in March 2017. He would have liked more caps but he accepted that a move to France would do his Test chances no favours.

Joe Schmidt will tell you that there is no hard and fast rule but since he took over as head coach in 2013, Johnny Sexton has been the only foreign based player to win an Ireland cap.

Ryan is now nine months into his stint with Racing 92, in Paris, and he has truly settled in. He has carried on where he left off at Munster and has taken up a leadership role with the French side; a driver of standards.

Keith Earls, his former Munster and Ireland teammate, says Ryan's presence is sorely missed. During a visit to The Hard Yards studio, Earls told a nice story about a tradition Ryan has left within Schmidt's Ireland squad. 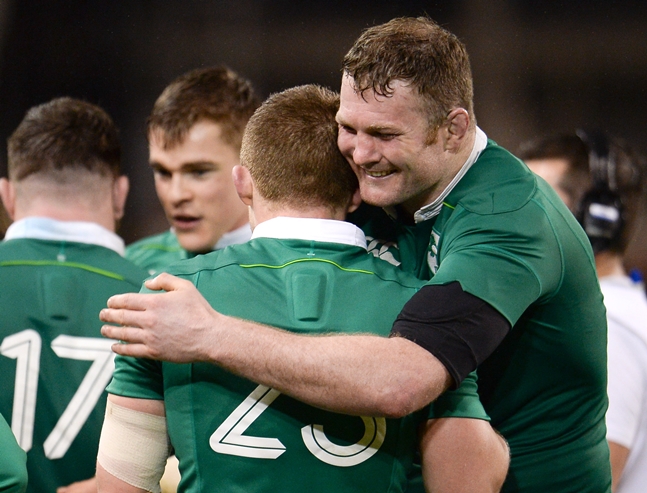 Earlier this season, Ulster and Ireland winger Jacob Stockdale told The Hard Yards about a lovely gesture by Earls after his Test debut in the 55-19 win over the USA. "Keith Earls was pretty brilliant in that respect," Stockdale began.

"After the game, I was going to go swap my extra jersey with one of the USA players. As I was walking out of the changing rooms, Earlsy just said, 'Here Jacob, don't be swapping your first'.

"He gave me his other jersey, and let me swap it, and I was able to hang on to my two first cap jerseys, which was really, really dead on of him. I really appreciated it."

END_OF_DOCUMENT_TOKEN_TO_BE_REPLACED

Earls says that tour to America and Japan, last summer, was one of the most enjoyable he has ever been involved in. "All the younger lads were asking about the [Irish] Lions players and what they were like," he recalls. "I was telling them they'd know all about it as they'd be playing with them soon enough. And it was great that a lot of them were involved in the Grand Slam this year."

On that jersey gesture to Stockdale, Earls comments:

"Yeah, it's your first cap for Ireland and you get two jerseys. [In 2008] I would have given one to my parents and the other one to my aunt.

"Jacob was going in [to the USA dressing room] to swap one of his jerseys and I was just thinking that it would be nice for his parents to have one and for him to hold onto the other himself.

"But I actually got that for Donnacha Ryan. Donnacha used to do that for all the new caps and I thought that was a lovely touch and it's something that we are doing now. It's a precious thing and it's something you may not want to swap, your first Irish jersey, but then when you play against someone you respect, you want their jersey too. I just saw it as an opportunity to do something for him."

It is great to see that Ryan's legacy of generosity has inspired those around him.