18 games into his professional rugby career and James Ryan has won the lot.

Dan Leavy has won all nine Tests with Ireland but has tasted defeat on a few occasions with Leinster.

Still, that is impressive going for the pair and the young Grand Slam winners are still near the start of their respective journeys. Ryan is even going throw the biggest week of his life under the radar...

Just scanning through the papers over breakfast. Not sure the photo editor of @IsFearrAnStar is a rugby fan. Poor @JamesRyan126 pic.twitter.com/P3B8J7hoXt

"Ryan has had a huge part to play in all those [18] wins," former Leinster and Ireland flanker Kevin McLaughlin told The Hard Yards.

"I haven't seen him have a bad game. He has been a stand-out in just about every game. He's such an athlete and it is hugely exciting. What is he, 21? He still looks a bit gangly. He has a huge frame and still hasn't filled out yet. He's already physically imposing."

Leavy is another impressive athlete and [from 41:00 below] he came in for praise from another former Ireland star.

"If you're looking at the squad at the start [of the championship], Leavy was thought of as the third choice No.7," said James Downey.

"And last week people were debating if he would stay in the team if Sean O'Brien was back but it was like, 'Well where are you going to put Sean? No.' It just shows how far Dan has come, and the squad too." 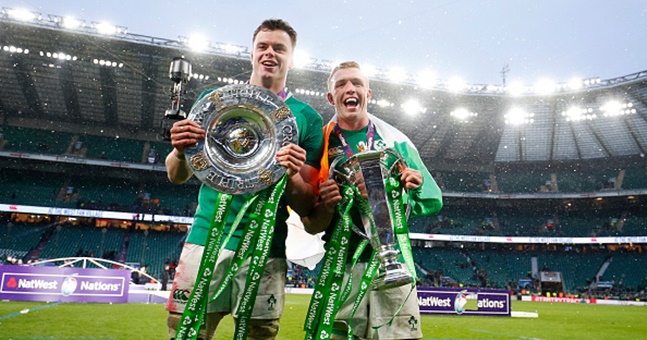 END_OF_DOCUMENT_TOKEN_TO_BE_REPLACED

The Leinster forwards certainly enjoyed themselves in London, and back in Dublin, after Ireland's Grand Slam success, but it did not take them long to get their focus back. They both hope to be involved in provincial action, on April 1, against Saracens and are already working towards that.

"Look, I was down at David Lloyd's [Gym] this morning, swimming with my kids, and Dan Leavy and James Ryan were coming out of the gym and swimming pool there.

"There are some guys that are professional beyond their years, and [you'd think] they shouldn't be as professional but they are. So that is obviously great to see. These guys are thinking forward already."

Tuesday morning, not long after the Grand Slam celebrations had finally died down, the two lads were back on the grind. Leinster will spare them of the heavy-lifting and gruelling sessions for another do or so but they were putting their own work in.

If most of us won a Tuesday evening tag rugby competition, we'd be tempted to go off the reservation for at least 72 hours.

This is the behind-the-scenes slog that has put many of these young men into the privileged position they now find themselves in.

It has taken hard work to get there and even harder work to stay there.


popular
QUIZ: Name every player that's scored three or more Premier League hat-tricks
The SportsJOE 12 o'clock quiz | Day 110
The SportsJOE 12 o'clock quiz | Day 109
'ROG was the kingpin... he just wanted to win, win, win' - Barry Murphy
"Some of the guys have put a lot into it" - Felipe Contepomi confident Leinster can start fast
SportsJOE 2000s Football Quiz | Round 9
What Leinster's strongest XV looks like when everyone is available
You may also like
1 day ago
"It's too experimental" - Kenny's team for Slovakia showdown begins to take shape
2 days ago
'I went from playing in front of 74,000 to having families cooking hot-dogs beside the pitch' - Shane Williams
4 days ago
How Connacht could line up after summer of massive change
5 days ago
Peter O'Mahony on the Paul O'Connell conversations that shaped his captaincy
5 days ago
"He just walked out the door without saying goodbye or anything. It was just so Axel. It was so perfect."
1 week ago
"The academy boys have turned into small monsters over the past few weeks" - Peter O'Mahony
Next Page