"From day one, I’ve never had any doubt about his willpower to come back"

In May of last year, Dan Leavy sat on-stage at Liberty Hall - as part of a live House of Rugby show - and detailed the horror injury that would wipe out the rest of 2019 and a big chunk of 2020.

It had been six weeks since he was carted from the Aviva Stadium pitch, during Leinster's Champions Cup quarter final win over Ulster, and his knee was still in a brace. His teammates were preparing for the Guinness PRO14 final against Glasgow and Leavy was preparing for a summer trip to the USA as part of his rehab programme.

"I've had a few knee injuries before," the flanker reflected. "I actually played against Ulster in a pre-season game, about three or four years ago, and I got rolled out of a ruck by big Nick Williams and I had a bit of a dislocation then too, so I knew straight away.

"That time, it popped back in. This time, it was out and it wasn't going back in. I was giving it a rattle myself, to see if it could pop in, which, I'm thinking, isn't the best idea, in hindsight.

"So the physios came on and popped it back in and I had two of those (oxygen) pipes and it was sweet cinnamon for the rest of the evening!"

Leinster call it a 'complex knee injury'. Leavy's ACL (anterior cruciate ligament) and PCL (posterior) were damaged and he flew over to London, last April, for surgery. Asked how long he anticipated being out of the game, he replied:

12 months was the goal. If Leavy could get back for the tail-end of the 2019/20 season, that would be a success. Back then, four days before Leinster became league champions, no-one would have predicted the Covid-19 pandemic and a rugby season like no other.

In the weeks before the Leinster squad headed to their respective homes for the lockdown, the 26-year-old was hard at it in their gym at the Newstead Buildings in Clonskeagh. 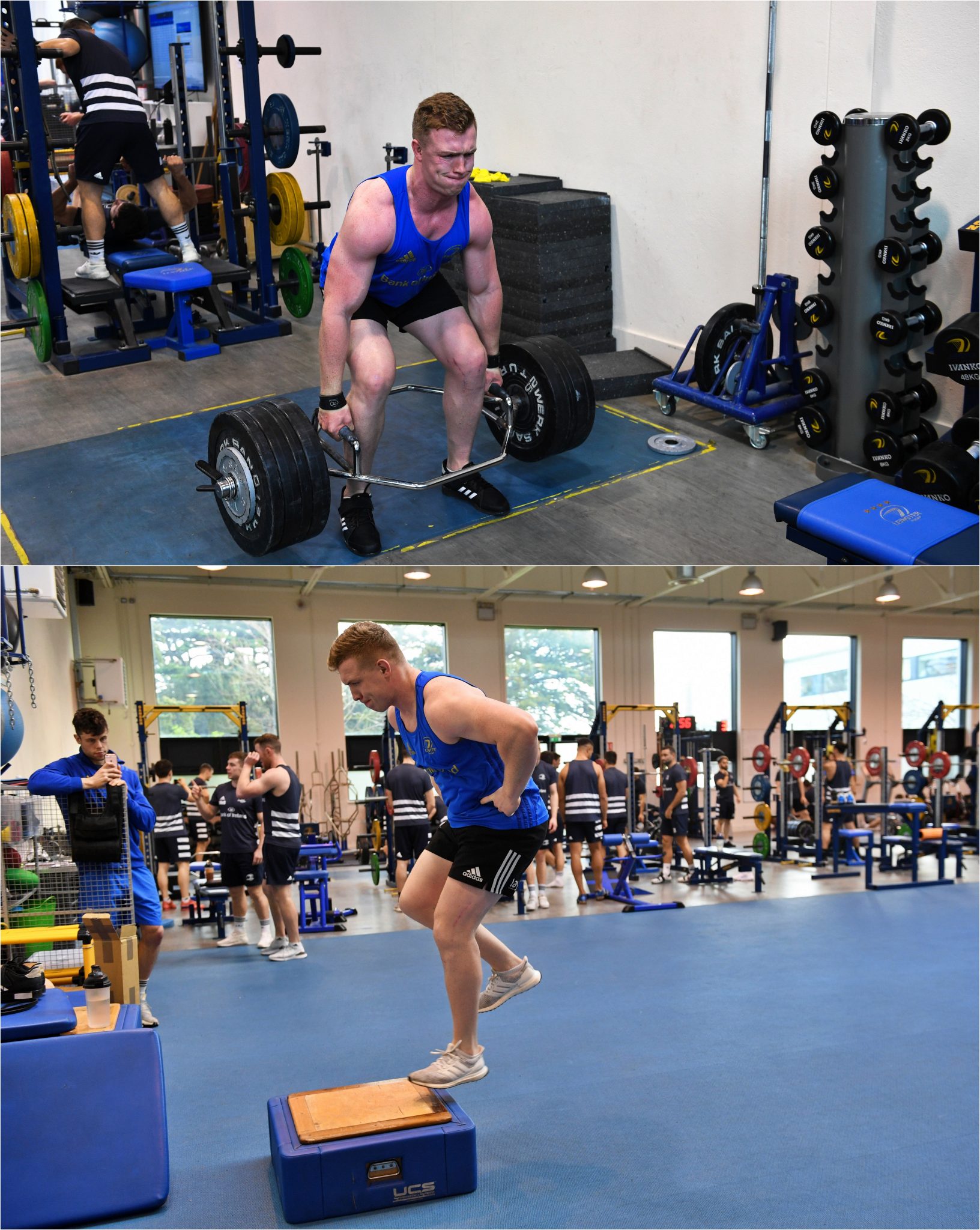 Dan Leavy goes through part of his rehab programme in December 2019. (Credit: Sportsfile)

While many of us are highly anticipating rugby's planned return, here, in late August, the elongated break in the season is a positive for Leavy. He has had extra months to build up strength in his knee and let his body heal up completely.

Leinster backs coach Felipe Contepomi says most members of the senior squad have shake off the usual bumps and knocks of a regular season. The Leinster coaching staff will have one of those positive headaches, he says, when it comes to team selection debates.

On Leavy, the Argentinean is fulsome in his praise but is wisely not putting any timelines on his first game back. Contepomi said:

"To be honest, from day one, I’ve never had any doubt about his willpower to come back from that injury because it’s the way he is.

"The medical staff, from the surgeon to every staff member in Leinster did a great job, working step-by-step to get him to where he is and it was great job from him to have the mental toughness to go through very dark moments; [he is now] nearly there to be able to play. He should be very proud and I feel very proud for him."

There are a little under six weeks - all going well with Ireland's handling of Covid-19 - before Leinster are set to take to the field against Munster. With the province already secure in their home PRO14 semi-final slot, coaches Stuart Lancaster and Leo Cullen may use the two inter-provincial games to give game-time to much of his senior squad.

Leinster will return to something closer to full-on rugby training at the end of this month. Leavy will be hoping to get the all-clear to go into those contact sessions as the long road back offers up a glimpse of the finish line.

popular
"My job at Sky is not to be a cheerleader for Rory McIlroy" - Paul McGinley
QUIZ: Can you guess the football shirt sponsors of these classic 90s kits?
"He's found a way to do it. Whether that's good or bad for the game, I don't know"
Sam Bennett's green jersey masterclass got Lance Armstrong talking
QUIZ: Identify the football club from these 12 crests
The SportsJOE 12 o'clock quiz | Day 187
Only old-school fans will get 20/20 in this 1990s footballers quiz | Part 2
You may also like
3 days ago
Heartbreak for Leinster is knowing they blew perfect five star opportunity
4 days ago
"It's hard to put into words what those two individuals mean to Leinster"
5 days ago
Leinster scrummed to death as Saracens remind everyone who's boss
1 week ago
Three factors behind Leinster's meanest defence in years
1 week ago
"We'll have to be 10 times better than we were against Ulster" - Robin McBryde
1 week ago
Leinster's Hugo Keenan on the work he put in to set that Bronco time
Next Page