"If he wasn’t so young, that was a career-ender"

"I can't say enough about the guy."

It was typical of Dan Leavy to announce his return to European rugby, last weekend, with a try only minutes after entering the fray against Montpellier. He has made a habit of stamping himself all over games.

END_OF_DOCUMENT_TOKEN_TO_BE_REPLACED

Leavy was named on the Leinster bench in the No.23 jersey after Leo Cullen and Stuart Lancaster, after some re-jigging, went for a 6:2 split between forwards and backs. When Leavy got over the tryline, eight minutes after coming on, French TV described him as a Leinster back. They must reckon the Irish province are brewing up some beefy backline talent over this way.

That European outing was the first for Leavy in 20 months after his horrific injury, which left him requiring extensive knee surgery, against Ulster. The flanker is now six games into his comeback and building nicely ahead of a big 2021.

James Lowe joined hosts Eimear Considine and Ian Madigan on House of Rugby Ireland and (listen from 2:20 below) spoke about how tough the road back for his Leinster teammate, and friend. 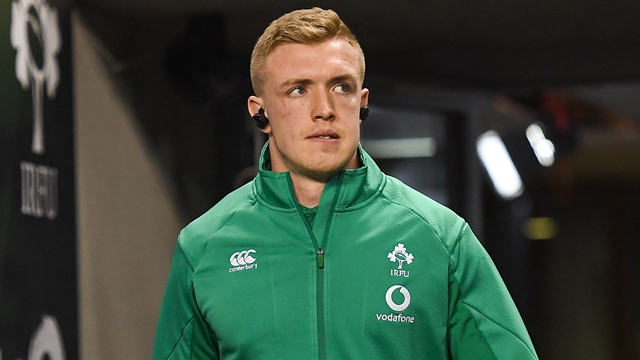 Dan Leavy has yet to lose a Test match with Ireland. (Photo by Brendan Moran/Sportsfile)
Advertisement

"Dan Leavy was back and in great form," said Considine. "What has it been like for him? Obviously, you've seen first-hand the struggle he had to get back from what was a bad injury."

"Just the emotional rollercoaster that he was going through," Lowe began.

"He had a lot of things on his side, though. He had awesome people, but just to see him go through that rollercoaster of emotions and miss out on a World Cup. You know, he's an absolute athlete. He's a freak in the gym. He's massive; he shifts a lot of weight.

"We went with the 6:2 split on the bench and he was that extra loose forward that you go with because he's... you can't leave him out. He's an awesome bloke. It's great to see him back, that's for sure."

END_OF_DOCUMENT_TOKEN_TO_BE_REPLACED

"He's just one of those guys that has got bullet-proof confidence," Madigan commented. "No matter who he is coming up against - Sarries, England, France, New Zealand - he's just backing himself, every day of the week.

"Obviously, it was a very bad injury but if there was every anyone that would come back from it, it would have been him. He's just so bullish about where he wants to go in every aspect of his life. Fair play to him.

"He stuck to it with his rehab for, what, 18 months. And from what I've seen of him, he looks just as good, if not better. He's definitely someone that strikes fear into the opposition. You've got to put in a lot of work to prepare to play him - he is such a threat as a ball-carrier and in getting over the ball."