Waxing lyrical about a man he knows well.

With the Six Nations wrapped up for yet another year, attention can now shift back to the trials and tribulations of Irish provincial rugby.

Leinster and Munster are in the most envious of positions, both teams are at the right end of the Guinness PRO12 table and they also have home, Champions Cup quarter-finals to look forward to.

They will also be quietly confident about progressing through their respective ties, and once you are in the last four, anything can happen and dreams can well become reality.

Unfortunately for Connacht and Ulster, their European ambitions are over but they do have plenty to focus on in the league.

When you look at Munster, their rise this season has been nothing short of meteoric.

They look a completely different team to the one that struggled last season.

The off-the-pitch reasons have been well documented at this stage.

But when you look at the players on the pitch, one man's availability this season has been a key factor in their success.

That man is Tyler Bleyendaal. 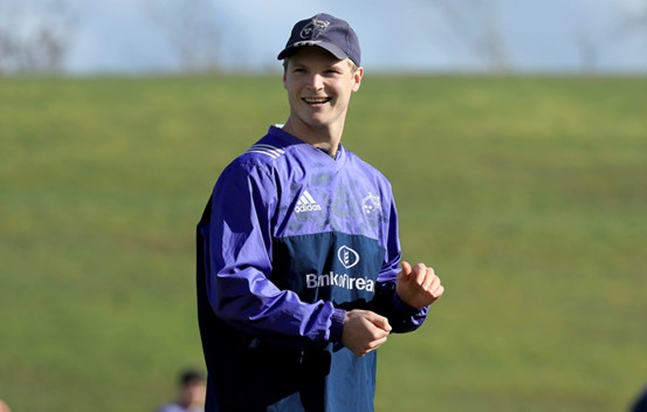 The Kiwi came with a big reputation when he arrived in Munster in January 2015.

Now in his third season, Bleyendaal has finally secured an injury-free run which has reminded everyone why Munster fans were so excited with his signature in the first place.

The 26-year-old's intelligence on the pitch and ability to read the game is almost second to none.

But he also backs this up with astute kicking from hand, a decent goal-kicking return and an unwavering ability to bring play close to the gainline.

Bleyendaal's fellow Kiwi, Dan Carter, was taking some time to answer questions from his fans on Twitter and one cheeky chap asked the All Black legend whether he fancied a stint with the southern province.

Don't think you want another Kiwi 10 as Tyler is on 🔥 this season. https://t.co/6ul1x3puFx

It doesn't get much better than getting praise from arguably the greatest out half ever to grace the rugby pitch.

For Munster, they will hope that Bleyendaal can continue his excellent form and help Munster achieve something truly special this season.


popular
The SportsJOE 12 o'clock quiz | Day 292
Michael Bisping tears into Dillon Danis for 'trying to be Conor McGregor so hard'
SportsJOE 2000s Football Quiz | Round 20
Conor McGregor wants immediate Dustin Poirier rematch, for UFC title
Daniel Cormier defends immediate reaction to shock Conor McGregor loss
Looks like Rojo and Lingard are finally on the way out of Old Trafford
Jolie Poirier certainly let her voice be heard after her husband's win over McGregor
You may also like
2 weeks ago
Munster secure victory after thrilling Connacht comeback in Galway
4 weeks ago
"It’s a jersey that I’d never swap or give away for no amount of money" - Ian Keatley
1 month ago
Danny Care accuses Munster players of 'rolling around and diving'
1 month ago
"It's something I have been pushing towards since I was very young" - Shane Daly
2 months ago
"It was rock bottom... I was going to pack my bags and start farming" - CJ Stander
2 months ago
"I could feel that connection at Soldier Field. Axel was there, 100%" - CJ Stander
Next Page