"He avoided the papers."

Andrew Trimble has some great memories of playing, and winning, in Paris. He scored a try on the night Ireland bid farewell to Brian O'Driscoll with a Guinness Six Nations winners' medal around his neck.

END_OF_DOCUMENT_TOKEN_TO_BE_REPLACED

Trimble also endured some tough times in the City of Lights. The former Ulster winner, in 2006, became the first Irish player in 93 years to score a fourth try against Les Bleus. Ireland scored four tries in 30 minutes yet they still lost by 12 points.

On Baz & Andrew's House of Rugby [from 32:00 below], Trimble recalled that crazy game and the moment Tommy Bowe discovered a dreadful, and extremely harsh, player rating. 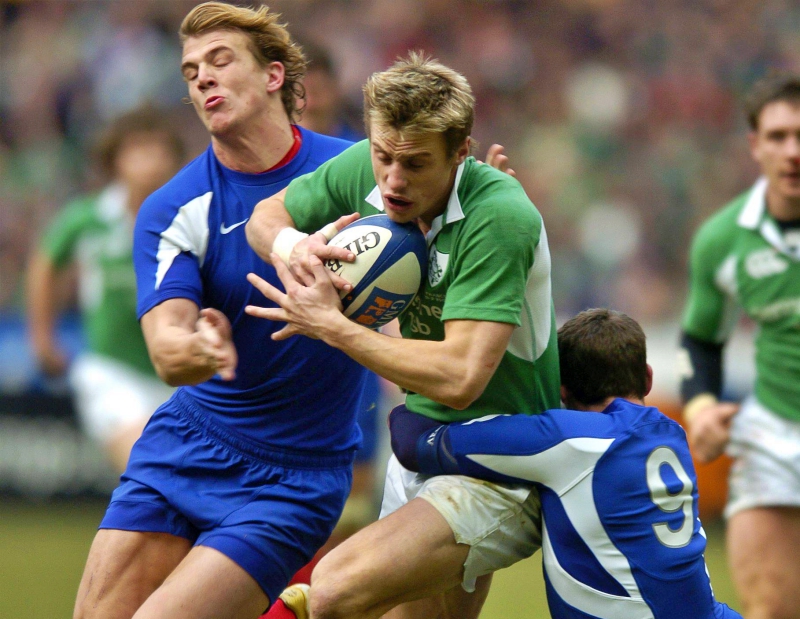 END_OF_DOCUMENT_TOKEN_TO_BE_REPLACED

As we have seen in this year's championship, line-speed and a high press have been a key element of sides' defensive sets. For backs, they are urged to get up on the line and squeeze the opposition; press them into making errors.

Ireland play that game under Joe Schmidt and [defence coach] Andy Farrell but it can often leave a team exposed out wide if there is an error.

Back in 2006, when Schmidt was back in New Zealand and Farrell was still lining out for Saracens and England, the Irish team were trialling such a high press under then-coach Eddie O'Sullivan. Two of the wingers tasked with pinching in and rushing up in defence were Trimble and his Ulster teammate Tommy Bowe.

Trimble recounted how Bowe made a slip-up [clip below] in trying to carry out the orders of O'Sullivan, and paid a dear price.

"First play of the game, Tommy came up ahead and Cedric Heymans was playing out of his skin that day. And Tommy came up and kind of slipped, right. A couple of minutes in, slipped, and Heymans went through, and they scored [through Aurelien Rougerie]... Heymans was making line breaks left, right and centre... They went through and scored."

Heymans made the break and, later in the game, scored a try for himself. David Marty crossed for two scores and France led 43-3 at one stage.

The away fans kept singing and Ireland responded with four unanswered tries but it was not enough, as they still lost 43-31. Trimble continued:

ANDREW: Next thing, Tommy was kind of black-balled, right, like confidence kind of shook a little bit. That was the game Tommy got a zero out of 10 from Neil Francis. Zero out of 10!”

BARRY: “I’ve never seen that before.”

ANDREW: “Yeah, so he knew… Tommy knew that he wasn’t going to get a great mark but he wasn’t expecting a zero out of 10. So he avoided the papers.”

ANDREW: “He avoided the papers and then one of his mates texted him and said, ‘Hey, don’t listen to that Neil Francis. He doesn’t know what he’s talking about’. And he was like, ‘What do you mean?’ So he looked it up and zero out of 10.”

It was 15 months before Bowe played for Ireland and, later that year [2007], he was left out of O'Sullivan's Ireland squad for the World Cup. He got back into regular rotation in 2008 before becoming a fixture, and Grand Slam winner, under Declan Kidney.

WATCH THE HOUSE OF RUGBY IRELAND VS. FRANCE PREVIEW HERE:


popular
"Nowadays, even if I don't hit a ball, I don't care as long as we win" - Gleeson learning from the past
Cristiano Ronaldo 'agrees £173m-a-year deal' with Saudi club
Thibaut Courtois warns teammates after leaks emerge from Belgium camp
Argentina reach World Cup last-16 with convincing win over Poland
World Cup 2022 Day 11: All the major action and talking points
Damien Duff makes 'brutally honest' England World Cup prediction after Wales win
World Cup 2022 Day 10: All the major action and talking points
You may also like
5 days ago
Former England international admits he wishes he had played for Ireland
1 week ago
Two baffling omissions as four Ireland stars make World Rugby 'Dream Team' of the Year
1 week ago
Josh van der Flier claims World Rugby Player of the Year at Monaco ceremony
1 week ago
"Highlight of my Ireland career" - Behind the scenes as Jack Crowley and Ross Byrne covered for a legend
1 week ago
Bundee Aki reminded us all of his best qualities, on a night Ireland couldn't do without him
1 week ago
Peter O'Mahony delivered some fitting Jack Crowley comments after surprise Test start
Next Page