"Obviously we got schooled in a good few areas."

With referee Matthew Carley indulging the All Blacks XV flooding, and camping in, the breakdown all night, you could feel the frustration of poor Craig Casey growing, and growing.

The Munster scrumhalf spoke of the massive honour he felt when asked, last Monday, by Andy Farrell to captain Ireland 'A' against a strong All Blacks XV.

END_OF_DOCUMENT_TOKEN_TO_BE_REPLACED

Casey is a confident, and talented, young man, so a part of him would also be ruing the fact he would sit out Ireland facing South Africa at a sold-out Aviva Stadium.

Conor Murray got the starting nod for that, with Jamison Gibson-Park set to make his first appearance of 2022/23 off the replacements bench. Casey will have told himself that a solid outing against the All Blacks XV, and a good chunk of the Fiji game, would put him in with a good chance of featuring against the Wallabies.

Instead, on Friday night at The RDS, it was carnage at the breakdown as the Kiwis targeted what, of late, has been a big strength for Ireland. With Farrell watching on from the coaches' box, that was an area the visitors dominated. Casey was having to go in, at multiple points, to try clear out arms, legs and torsos so he could get the ball away. He twice had the ball slapped away from him by Kiwi mitts.

Ferocious line-speed, breakdown dominance and targeting the Ireland lineout - upon those three pillars the All Blacks XV set up shop, and cut loose. 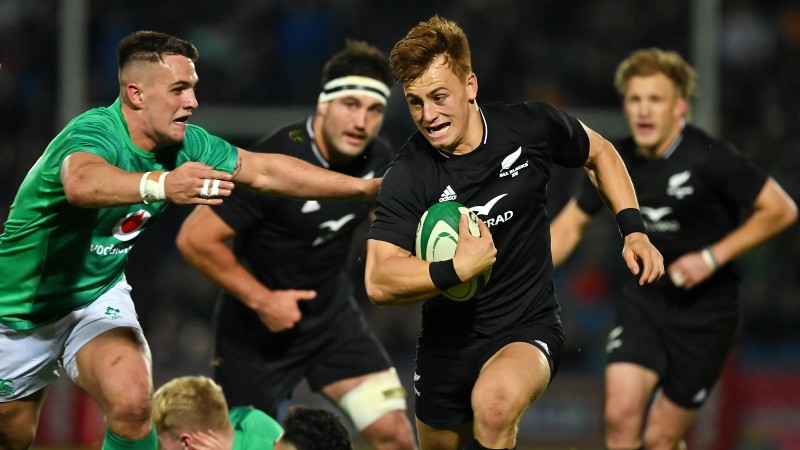 Ruben Love of All Blacks XV breaks clear of James Hume of Ireland, at RDS Arena. (Photo by Brendan Moran/Sportsfile)

Craig Casey and 'A' backline on hiding to nothing

It was a night when Ireland's ambitions of having 50 players all pushing for World Cup 2023 selection looked to be exposed. Sure, many of the players that featured on Friday would perform better in a stronger unit, but too few of them vaulted their arms up and told the Irish coaches they had what it takes to step up.

END_OF_DOCUMENT_TOKEN_TO_BE_REPLACED

Across social media, there was a short supply of sympathy for a side that got lit-up, 47-19. There were plenty of players called out by disgruntled supporters, but it was Casey and Jacob Stockdale that copped the brunt of the heavier criticisms, in the stands, on the night, and in the social media takes, as the game wore on.

Stockdale had a decent first half, with a couple of strong carries and one brave aerial take. As the game went on, and the result slipped further out of sight, the Ulster winger struggled to get himself into the game. There was one clearing kick block that he managed - making up for being caught out doing likewise in the first half - but he will have been frustrated at not getting much of a chance to open up.

Casey, Stockdale and Ciarán Frawley, who suffered a knee injury but also had a rough ride against the Kiwis, were always going to be on the back-foot as their pack were on the back-foot. Leon MacDonald had his team well prepped and they really tore into Ireland 'A'. When one side bosses collision, the breakdown and has a maestro like Damian McKenzie pulling the strings, the opposition backline are on a hiding to nothing.

There were a few positives on the night. James Hume and Jamie Osborne may not have always been in sync, but both had some good individual bursts, Calvin Nash showed a fearlessness to his game and Marty Moore, Max Deegan and , in particular, Shane Daly all did well off the bench.

Many of those that featured in that heavy Friday defeat will be hoping beyond hope that they get at least one more crack against a Fiji side that opened up their Autumn Nations Series with a 28-12 defeat to Scotland.

Ireland 'A' bounced back after a poor summer start to beat the Maori All Blacks in the second outing. With another week in the Ireland camp, and a few senior stars to strengthen the XV, one hopes Casey, Daly, Nash, Cian Prendergast and a few others get another chance to show Andy Farrell what they are made of.