"That will certainly be a big battle for Munster's No.9 jersey in the coming years"

"Having one of the best in the world to emulate has been really good."

Craig Casey is in line to start for Munster when they start their 2020/12 Guinness PRO14 campaign on the road to Scarlets. With fellow scrumhalf only listed as an 'outside chance', by Johann van Graan to play in Week 2, opportunity is knocking for the Limerick native.

The 21-year-old has pushed ahead of Nick McCarthy and Neil Cronin in the Munster scrumhalf department and looked lively when rugby restarted, in August, and the province had three outings at the Aviva Stadium.

END_OF_DOCUMENT_TOKEN_TO_BE_REPLACED

Speaking with us during the mid-season pre-season [yes, it's been that sort of year], Casey spoke about his journey from Munster mascot, at the age of five, to winning a 2019 U20s Grand Slam with Ireland and making his presence felt in his province's senior squad. He also spoke about training with Conor Murray and striving to provide competition for that Munster No.9 jersey.

"The Heineken Cup was out the back of my house, as well, because Mossy had it" 🏆

From @Munsterrugby mascot, aged 5, to scrumhalf in the senior squad, @CraigCasey9 really is living the dream 🔴 pic.twitter.com/KCfAUL7F6s

Looking ahead to the new season, at an online press briefing in Limerick, van Graan named Casey as one of six likely youngsters to challenge for starting XV positions. "We don’t want the starting XV to be comfortable," the Munster head coach began.

"Someone like Craig has really been pushing, he’s pushed Neil [Cronin] and Nick [McCarthy] along as well. At the weekend [in a pre-season win over Connacht], Craig was excellent. He definitely picked up the tempo of the game, he is very good with his communication and demands a lot of his forwards.

"That will certainly be a big battle for the number nine jersey in the coming years at Munster."

Asked about the rapid progress and promising early signs from Casey, his Munster teammate Mike Haley had nothing but positives to espouse.

"Craig Casey has been phenomenal since we came back. He's just pushing and has been competitive in everything that he does. He doesn't let anyone get anything over him, which is great to see. There is a massive competitiveness there, in training, and it's been great to see in matches too."

"When you come down at watch him train," Haley continued, "he doesn't deviate from anything you'd see on the pitch. He's the exact same on the training field. The whistle would be gone and a lad would chip the ball over the top of him. He'd be fighting for the ball, and all sorts. He really takes it all the way, and that shows on the pitch. It breeds confidence and fair play to him. He's been playing well."

END_OF_DOCUMENT_TOKEN_TO_BE_REPLACED

Haley also flagged Dan Goggin, Shane Daly and Alex McHenry as players that should push on again this season and both he and Tadhg Beirne spoke highly of Liam Coombes. "I'd be a big fan of Jack Crowley, though," Haley added. "I just like the way he plays the game. He's got a good feel for it and that's impressive." 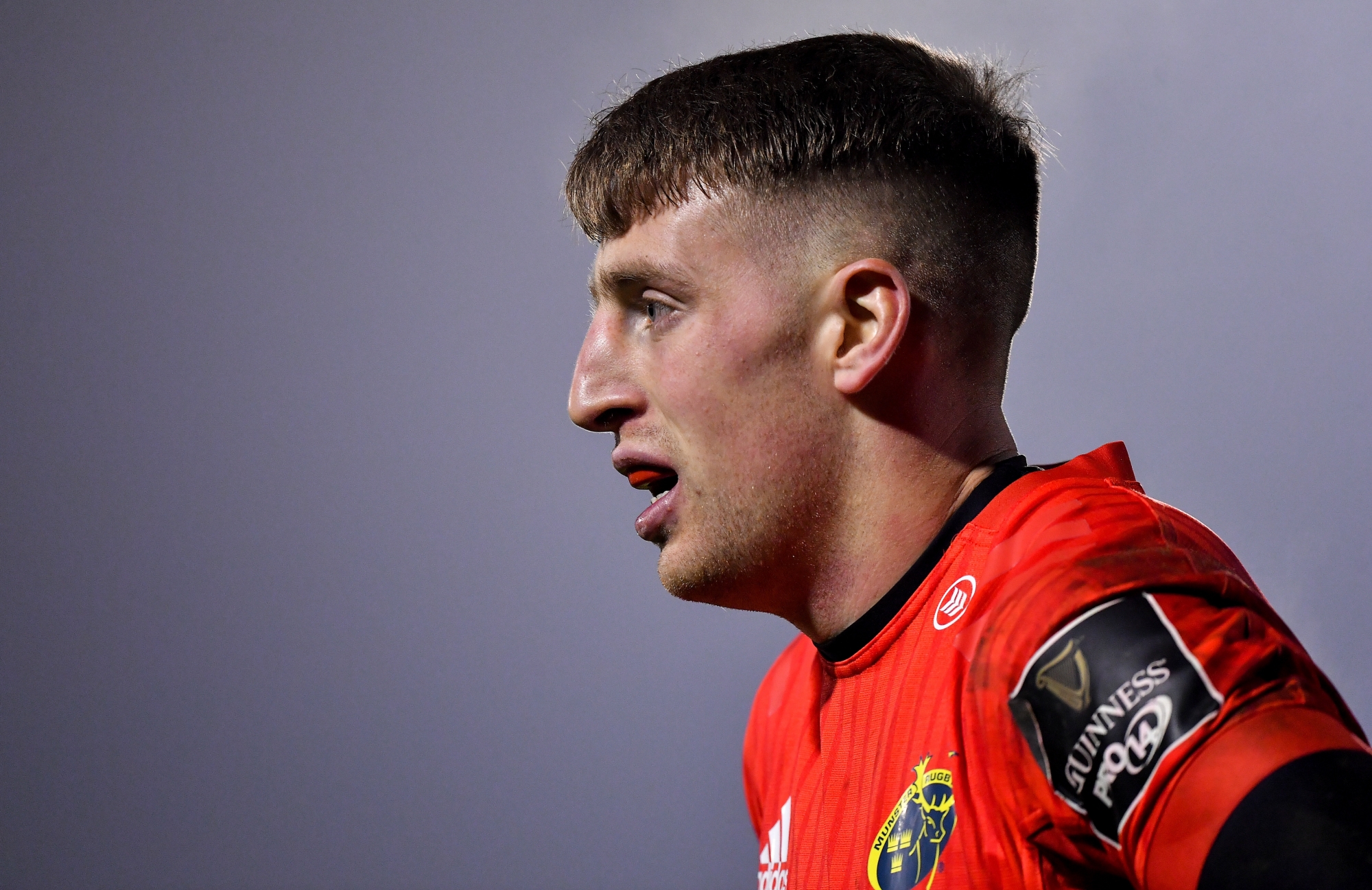 Liam Coombes of Munster during a Guinness PRO14 match against Connacht in December 2019. (Photo by Brendan Moran/Sportsfile)

During his part of the briefing, van Graan's spirits lifted when discussing the growing array of young talent at his disposal. "We believe that we have got a very good crop of youngsters coming through that will not only play in these games but perform in these games," he said.

"Because there is a big difference between being selected and actually performing in a big game. Somebody like - and I don’t want to name-drop certain guys - but someone like John Hodnett will definitely come close to our starting European team. Someone like Craig Casey, Ben Healy, Jack Crowley, and Jake Flannery.

"We’ve added to the squad with Roman Salanoa, Keynan Knox is a year further along the line, Matt Gallagher is with the team, someone like Liam Coombes performed [against Connacht] on the weekend.

END_OF_DOCUMENT_TOKEN_TO_BE_REPLACED

"You've got guys who can be really special players but need a bit more time, someone like Thomas Ahern. We believe that we are improving not only the academy group but the squad. So we’d like to believe from a playing group that we’re better equipped a year on."


popular
WATCH: Paul O'Connell proves for the umpteenth time that he's not like us mere mortals
Kieran Donaghy set to break 30-year-old club record this weekend
Study shows GAA players more prone to binge drinking than their peers
"He's one of the best athletes, if not THE best athlete I've seen in the last while"
Shane Walsh: 'That's not how I was coached to play football. No one was coached to play football that way'
Sean O'Brien shares some of the worst player forfeits from his Leinster days
Danny Mills forgets he's on air as he calls Man Utd 's***' on Sky Sports
You may also like
2 weeks ago
"The guy just can't catch a break" - RG Snyman back on gruelling comeback trail
2 weeks ago
Munster confirm RG Snyman has re-ruptured his cruciate ligament
2 weeks ago
Worrying scenes for Munster as RG Snyman lasts only nine minutes against Scarlets
3 weeks ago
Gavin Coombes and the fascinating tug-of-war for Ireland's No.8 jersey
3 weeks ago
Peter O'Mahony's try-saving actions cannot be understated or undersold
3 weeks ago
Peter O'Mahony rages over "full-on bite" as Munster secure comeback win
Next Page