"Ethan McIlroy was phenomenal, and deservedly won Player of the Match."

Such was the spectre of Leinster, and their long winning streak, that the initial take from many rugby fans was that Ulster might live to regret just getting four points against Munster. Beating an ever-improving Munster side at home was no longer enough any more. Not when you are stuck in Conference A with the blue juggernaut.

END_OF_DOCUMENT_TOKEN_TO_BE_REPLACED

As it turned out, on Saturday, Connacht were deserving winners over a Leinster side that slipped to their first Guinness PRO14 defeat since April 2019. It meant Ulster moved 12 points clear of Leinster, who they face at The RDS on Friday. The game is very much afoot.

On House of Rugby Ireland, Ulster outhalf Ian Madigan spoke with fellow co-host Eimear Considine (listen from 5:30 below) about how a few of the province's youngsters are helping with their drive for a first trophy in 15 years. 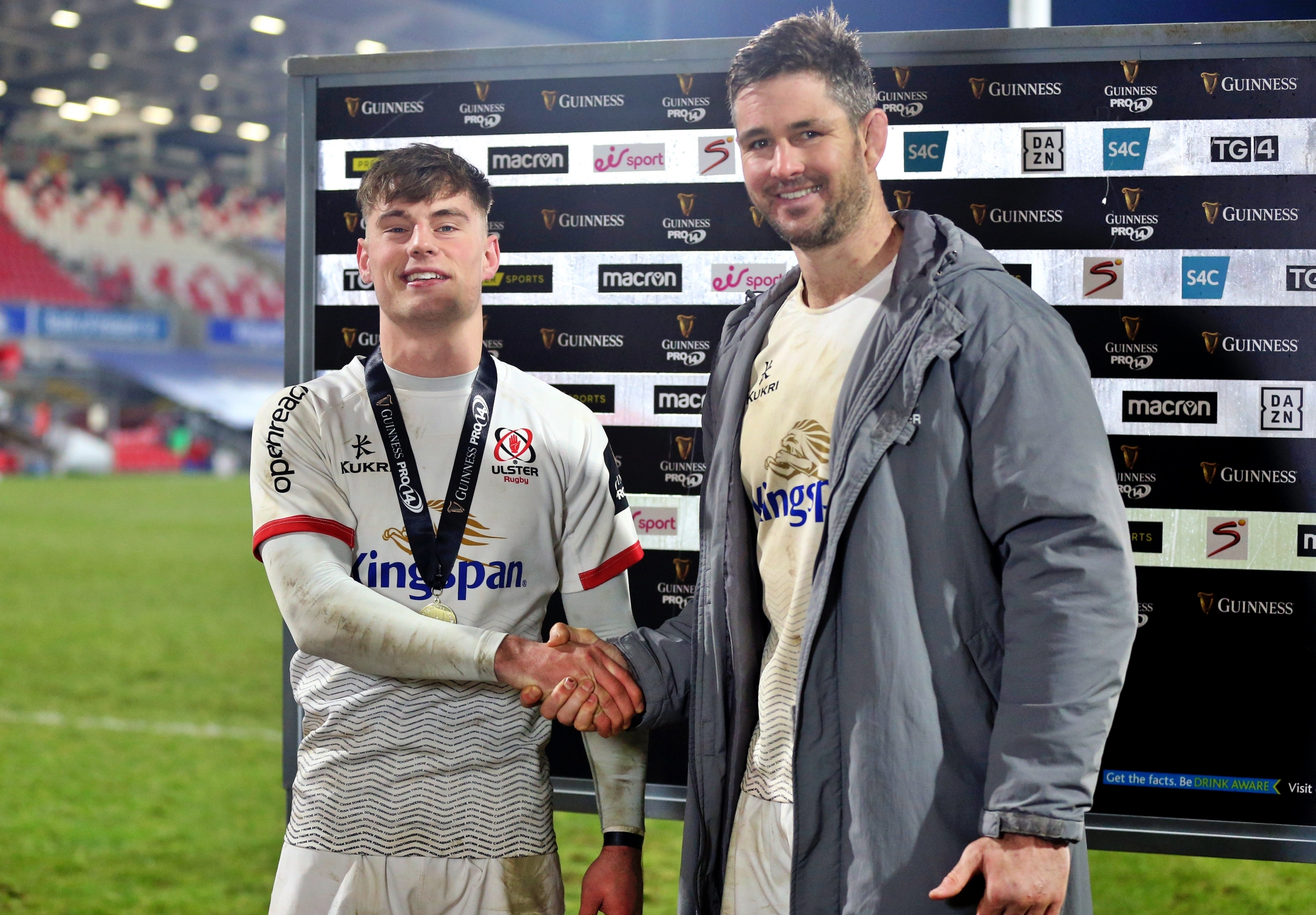 Ethan McIlroy receives his Player Of The Match Award from Ulster captain Sam Carter following the win over Munster. (Photo by John Dickson/Sportsfile)

"The likes of James Hume running those sort of arcs, and the same with Jacob Stockdale" says Madigan. "And it was great to see Ethan McIlroy up on the left wing." Considine adds:

"Ethan McIlroy was phenomenal, and deservedly won Player of the Match. This season has been about the young guys coming up, be it in Ulster, Leinster, Munster or Connacht. I thought himself and James Hume did particularly well. James was under immense pressure to get that ball away (for the Matt Faddes try), and he teed up Stockdale really well, on the outside, with a really nice overs line that completely cut out the Munster defence."

END_OF_DOCUMENT_TOKEN_TO_BE_REPLACED

Aside from Ulster's young guns, there were senior debuts for the Leinster trio of Max O'Reilly, Greg McGrath and Andrew Smith, while promising outhalf Jack Crowley made his first appearance for Munster at the Kingspan Stadium.

Connacht have been relying on their academy players for many games this season but five more established stars - Tom Daly, Jack Carty, Quinn Roux, Gavin Thornbury and Conor Oliver - all came in for praise on the show.

"Gavin Thornbury and Conor Oliver were fantastic," says Considine. "I thought Gavin and Quinn Roux, both locks, did well and Conor Oliver was excellent as well." On Oliver, who is from Dublin but played for Munster before heading to Connacht, Madigan says:

"We’d to do a lot of preparation last week, coming up against Conor. He’s a back-row guy that gets over the ball very well. He’s a very good tackler. He’s got good skills. He’s a very good passing game. And we knew that we’d have to be at our very best to nullify him at the breakdown. He comes up with two, three, four turnovers in nearly every game. He’s very similar to the way CJ Stander would be doing for Munster.

"I thought he had a fantastic game. There was a few key passages of play, in or around the halfway line, where either he would make a big tackle himself or someone beside him would and he’d get straight over he ball. Just when Leinster were looking to build momentum, there’s nothing worse than a turnover penalty around the halfway line, and suddenly you’re back defending in your own 22."

Also covered by Eimear and Ian on the latest episode:


popular
Roy Keane accuses Man United of 'disrespecting' Cristiano Ronaldo
Broadcaster tries to reunite Roy Keane and Alfie Haaland before Manchester derby
Roy Keane comments on Manchester City will inevitably start a worthwhile debate
Padraig O'Hora gets his hair pulled as fly-goalie gets punished in Mayo championship
Erik ten Hag explains why he didn't bring on Cristiano Ronaldo in derby day defeat
Player ratings as Man City hammer Man United 6-3 in Manchester derby
Alex Ferguson and Cristiano Ronaldo reactions say it all as Man City run riot against Man United
You may also like
3 months ago
Join our ultimate sports quiz in Dublin for a chance to WIN a trip to a Premier League game
6 months ago
Join Munster legend Billy Holland for this free mortgage masterclass
8 months ago
[CLOSED] COMPETITION: WIN a two-night stay at the luxury Trident Hotel in Kinsale Harbour
9 months ago
Here's where you can find some incredible deals on exercise machines in 2022
9 months ago
WATCH: This clip shows just how amazing amateur clubs in Ireland really are
10 months ago
Pieta and Shane Carthy encourage people to take part in #HopeOverSilence this Christmas
Next Page