CJ Stander, a son of Limerick.

The Munster, Ireland and now Lions star was awarded on Wednesday as an Honorary International Ambassador for Limerick. 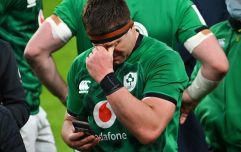 END_OF_DOCUMENT_TOKEN_TO_BE_REPLACED

Since joining the province in 2012, Stander has thrown himself into the Munster way of life and, now, if you cut him open, he'd bleed red...

The honour bestowed upon him means that he is being recognised for his outstanding commitment, support and encouragement to the people of Limerick and to the promotion of Limerick at home and abroad.

It's official: CJ Stander is the most popular Irish import since Saint Patrick https://t.co/1qVWqLbfMk

The player mic audio from the Pro 12 win last weekend really shows the passion the man has for the cause.

And his comments upon being announced as an ambassador for Limerick sum him right up.

"It’s a massive honour to receive this," Stander said.

"When I arrived here the biggest thing that I felt was that Limerick was a city where people look after their own.  They pulled me in from the beginning and looked after me and my family and just made us part of the city.  It was unreal and it was great to get that welcome.

"Four and a half years in and people are still welcoming.  It is a great town for me hopefully one day to raise a family.  Limerick has done a lot for me, and my promoting it is everything they deserve."


popular
Roy Keane's issue with Argentina star could rival Graeme Souness and Paul PogbaA~WQA~~~~~~AAAA
Lionel Messi makes Gary Neville eat his words after "silk pyjamas" comment
Roy Keane cracked up Ian Wright and Gary Neville with England team spirit remark
Roy Keane takes moment on TV to pay tribute to his old team in Cork
Roy Keane shoots down ITV presenter's 'excuse' for England's draw with USA
'I was so stressed the week before the All-Ireland and I ended up having a panic-attack' - O'Shea and O'Sullivan open up
Ronaldo finally reveals why he got that hideous haircut
You may also like
1 year ago
Late Lions momentum growing for CJ Stander and Keith Earls
1 year ago
CJ's bone-rattling moment that summed up Ireland's physical dominance
1 year ago
Some of the stuff said about CJ Stander this week would wilt your spirit
1 year ago
CJ Stander inherited a great man's jersey, and made it even greater
1 year ago
"Hopefully his last game in green will be one to remember"
2 years ago
CJ Stander responds to "softies" remark ahead of England battle
Next Page