The Munster faithful will be rightfully revelling in their side's dramatic, last-minute win over Glasgow Warriors.

14 points down with 14 minutes to play, Glasgow understandably ran out of steam. They had run the ball over just about every blade of Thomond Park's grass and had Munster on the ropes.

Anyone that knows Munster, knows the ropes are not the end. This team have to be straight KO'ed before they'll believe that final bell has sounded. They dug deep, as Munster teams so often do, and climbed back into the tie.

Alex Wootton gave them hope and Alby Mathewson's snipe made it a two-point game. Rory Scannell then kicked away possession and, for almost six minutes, Glasgow hogged it.

With mere seconds left to play, CJ Stander, Billy Holland and Peter O'Mahony all combined to give Munster one last shot at victory. Scannell took it, with a 48-metre penalty, but many Glasgow fans are livid with the late decisions that cost their team, and some want Stander cited.

With 18 seconds to go, George Horne passed to replacement hooker Kevin Bryce for what should have been Glasgow's final carry of the game. As they had done for the previous three minutes, Glasgow's players looked to chain-link onto the ball-carrier in order to make it harder for Munster to attempt the poach.

As Byrce ducked down, flanker Callum Gibbins and replacement lock Greg Peterson got in position to drive on and over their teammate at the breakdown. CJ Stander had other ideas. With his right arm hanging low and ready to drive up, Stander's intention is to separate Bryce from the chain. 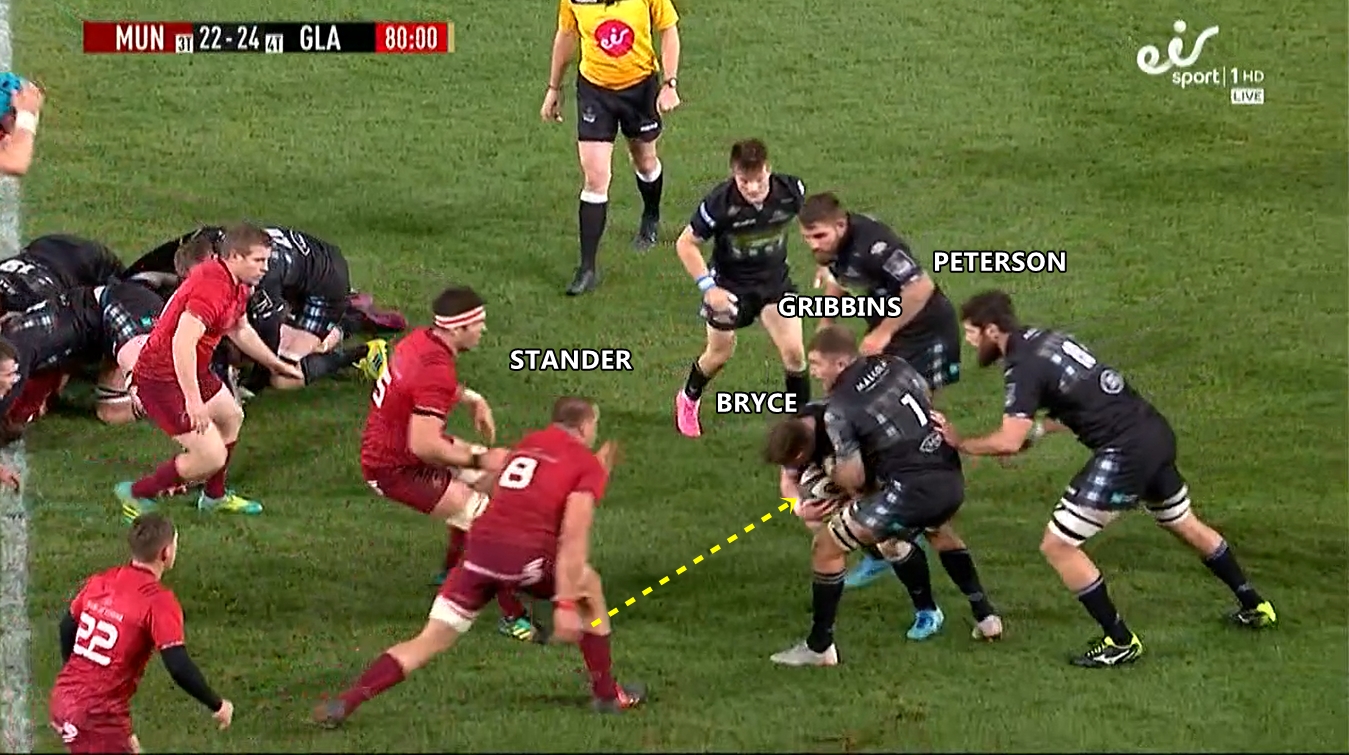 Stander does so well in disguising his true intent - detaching Gribbins - as he gets his left arm on Bryce before driving the flanker away. Referee Dan Jones has a straight and clear view of the tackle and lets this one go. On another day, Stander could be pinged for tackling a player without the ball.

END_OF_DOCUMENT_TOKEN_TO_BE_REPLACED

Stander does such an effective job of isolating Bryce as he takes Peterson and Horne out of the picture too. All Peter O'Mahony needs is one second to clamp onto the ball and get to work.

Note, too, how Billy Holland [with his head taped up] screens the isolated Bryce and prevents tighthead Jamie Bhatti from getting in to help out. 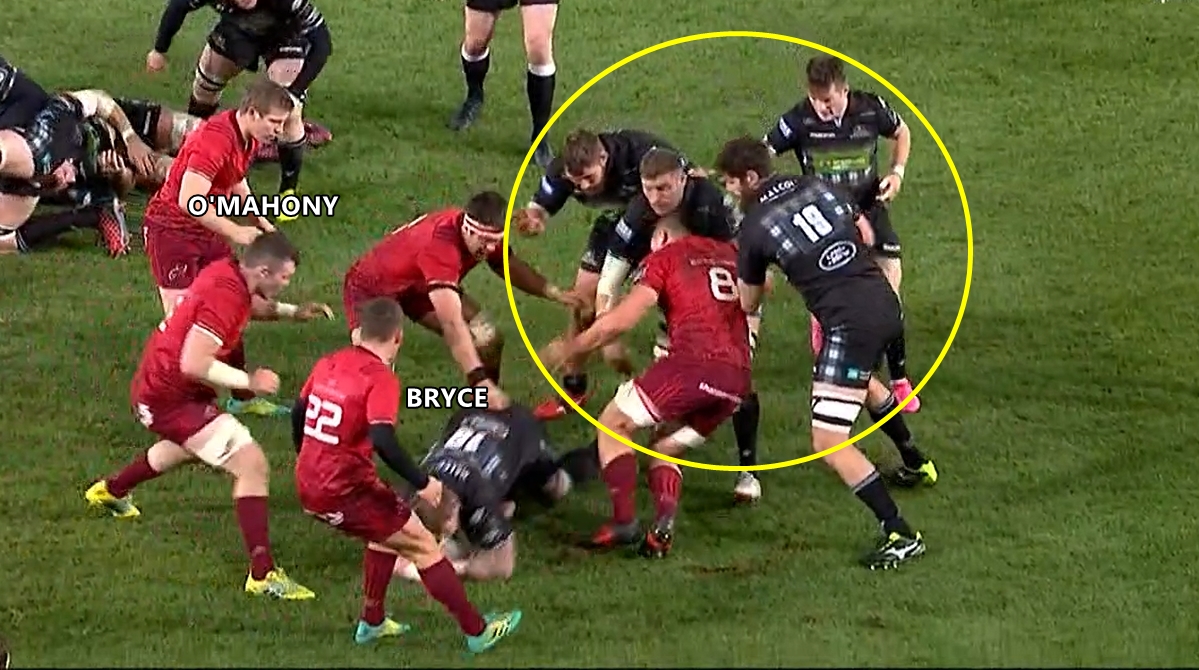 The opening has been made and O'Mahony has his paws on the ball. On he clamps and gets to work. He is supporting his own weight for the first couple of seconds but, as Glasgow pile in to make it messy, this is where Munster get lucky.

The touch judge on the far side of the pitch may have his view hindered - it is hard to tell from this angle - but there is no way Jones can see the other side of the ruck.

In pitching in to stabilise O'Mahony, Ian Keatley gets his arm under his captain's right leg. O'Mahony's bright yellow boot flies into the air and he is now off his feet. Jones cannot see this, however, and pings Bryce for holding on. 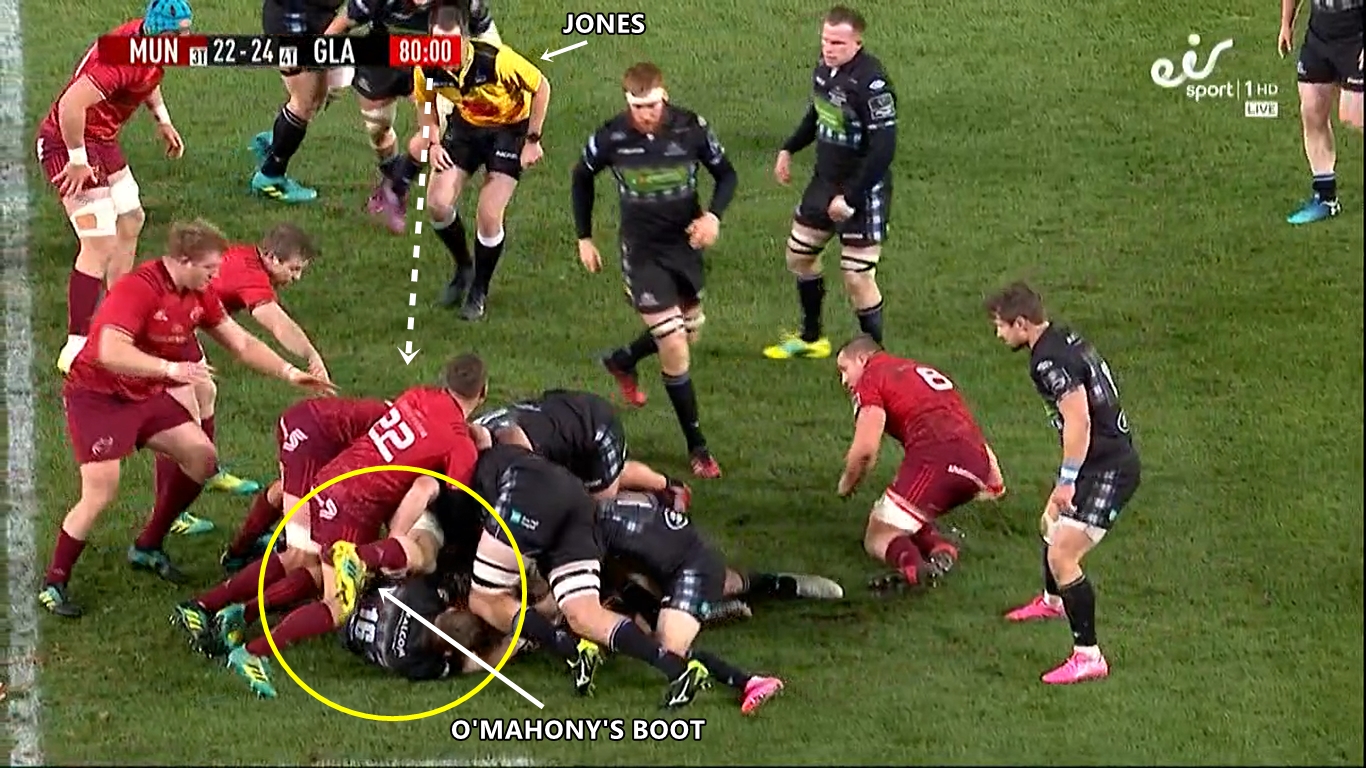 With 14 seconds left on the clock, Munster are awarded a penalty and the spent O'Mahony receives treatment for the third time in a thoroughly compelling, sapping encounter.

END_OF_DOCUMENT_TOKEN_TO_BE_REPLACED

Stander is back on his feet just as the whistle goes. Backpedalling slightly, on legs that have delivered another 80-minute shift, he applauds the call as Glasgow hands go on Glasgow heads.

Watch how the whole moment plays out, and CJ Stander applauding in the midst of an aggrieved clatter of Warriors.

Following the game, I tweeted out an eir Sport clip of that final penalty decision and the response has been mixed, to say the least.

While Munster fans have lauded CJ Stander for the smart bit of play, and raved about O'Mahony's doggedness, Glasgow supporters have called for the No.8 to be cited for taking Gribbins out illegally. The Scots also take major issue with O'Mahony not supporting his own weight and going off his feet.

Just seeing it back now - with thanks to @eirSport - but O'Mahony won that final penalty for Munster.
What a game for the captain. pic.twitter.com/uKvLxhfKzJ

Ultimately, though, Glasgow should never have allowed this match to be decided by the referee. Munster were always going to have a purple patch but the 2014/2015 champions will be livid at how they squandered a 24-10 lead with 15 minutes to play.

One thing is for sure, it adds another chapter to a rivalry that now has more niggle to it than any of the inter-pros. As both sides are in the same Guinness PRO14 conference, their only chance of meeting again this season is in a league final or in the Champions Cup knock-out stages.


popular
The SportsJOE 12 o'clock quiz | Day 294
"If Munster hadn't given him a contract, I'd say Leinster would have gone after him"
Conor McGregor wants immediate Dustin Poirier rematch, for UFC title
QUIZ: Name the missing player from the All-Ireland final team sheets
Cristiano Ronaldo facing laughable fine having broken Covid rules for Ski trip
QUIZ: Name every Chelsea manager hired by Roman Abramovich
The SportsJOE 12 o'clock quiz | Day 293
You may also like
4 weeks ago
"It’s a jersey that I’d never swap or give away for no amount of money" - Ian Keatley
1 month ago
Danny Care accuses Munster players of 'rolling around and diving'
1 month ago
"It's something I have been pushing towards since I was very young" - Shane Daly
2 months ago
"It was rock bottom... I was going to pack my bags and start farming" - CJ Stander
2 months ago
"I could feel that connection at Soldier Field. Axel was there, 100%" - CJ Stander
2 months ago
"There is no doubting Baird is a future Irish second row, long-term" - Paul O'Connell
Next Page