"Hopefully his last game in green will be one to remember"

Johnny Sexton says when he was summoned for a chat with Andy Farrell and CJ Stander, on Monday, there were other possibilities in his mind.

CJ Stander will play his final Ireland game this weekend, less than a week after winning his 50th Test cap.

Ireland captain Johnny Sexton found out about Stander's plans - to retire from all forms of rugby at the end of the season - on Monday morning and was taken by complete surprise.

"I didn't see it coming. They called me into a meeting with Faz. It's the last thing that I thought I was getting called in for. Literally, if you gave me a thousand of things to guess, that wouldn't have registered on it.

"Look, he's done things for the right reason. His wife and daughter are back in South Africa at the moment. They've been there a few months and they went for the last lockdown as well. It takes it's toll, doesn't it? He's just taken the decision based on that, and we respect him for that.

"He's a big loss to Munster and Irish rugby. He's been huge for both teams over the last five, six years. So, very shocked but we wish him well and hopefully his last game in green will be one to remember." 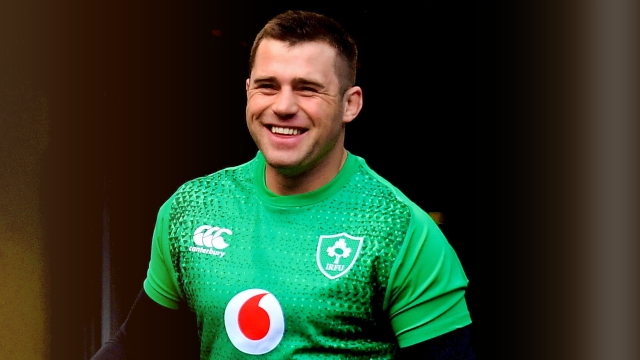 CJ Stander during the Ireland Rugby captain's run at the Aviva Stadium in Dublin. (Photo by Brendan Moran/Sportsfile)

Sexton and Stander have often clashed in inter-provincial matches but have played six years together for Ireland.

"He's a great person, first and foremost," said the Ireland captain. "You can't be a good teammate without that. He's very popular in the group.

"And it's just his worth ethic. I can't ever remember him missing a game. Maybe from suspension after his red card against South Africa but, in terms of being injured, I can't remember one. His relentless attitude, his preparation and how tough he was. I've played against him numerous times and I've been on the receiving end of a few carries. He's got the utmost respect of anyone I've played with or against."

Munster captain Peter O'Mahony, who is back in the selection mix for this Saturday's clash with England says the rest of the squad were informed about Stander's retirement decision on Monday evening.

"He explained his reasons and they're very valid ones," said O'Mahony. "Very noble, in my opinion." He added:

"From the very day he arrived in Munster, he did his best to buy into our culture. And now he's created bits of our culture. He's the person who, I always think, 'Who do kids look up to?' You want to be someone who the young-fellas look up to. I suppose it's a nice compliment to give someone - there's kids around not only Ireland but the British Isles and beyond that want to be like CJ."

Ireland have all the motivation they need, with England coming to town and Lions places up for grabs.

Giving CJ Stander a big send-off should ensure not a single drop is left in the well, come full-time on Saturday.


popular
QUIZ: Which is the correct GAA crest?
Andy Moran reveals which former Mayo teammate was the ultimate team player
Paul Galvin is not one bit impressed with the new Kerry jersey
"It’s hard not to respect Johnny, even if you don’t like him!" - Dan Biggar
"I was in the Blackrock end goal looking up to the heavens saying, "Get us through it" - Kerins following his late father's footsteps
Kieran Trippier pinpoints Daniel Levy's biggest transfer mistake
Ireland Under-17 defender Cathal Heffernan 'in talks' with AC Milan
You may also like
3 days ago
"I have to come into this camp and do what I can to get the No.2 jersey" - Rob Herring
3 days ago
"It's not a stepping stone any more" - Connacht pride in Test-ready stars
4 days ago
"I had a point to prove" - Conor Oliver on choosing Connacht over Leicester Tigers
1 week ago
"I saw a skinny boy from Ireland, standing in a big goal" - Jurgen Klopp praises Caoimhín Kelleher's development as a goalkeeper
1 week ago
Predicting Ireland's starting XV for Wales after Andy Farrell squad announcement
1 week ago
Jamie Heaslip delivers Jack Carty reality check, hours before Ireland call-up
Next Page