"For JJ to step up and take that kick, that's balls. That's big balls" - CJ Stander

Across the Munster backline, and on their bench, there are players willing to step forward and take big kicks.

Putting the likes of Joey Carbery, Bill Johnston and Tyler Bleyendaal to one side, Munster have profited from the clutch goal-kicking of Rory Scannell and Conor Murray at different, crucial times this season.

On Saturday, with their season on the line, the versatile JJ Hanrahan did not hesitate when CJ Stander won his team a big penalty. Alby Mathewson did his part too, needling his opposition scrumhalf until he tossed the ball away. This saw the penalty marched 10 metres closer to the Benetton Treviso posts.

Hanrahan put his hand up, 'Mine'. He had to contend with referee Nigel Owens scolding him for trying to land-grab a couple of metres on his late penalty attempt, but refocused and kicked a 50-metre bomb that proved the winner.

That kick highlighted how important Hanrahan has been to Munster this season and, with Joey Carbery expected back for the Guinness PRO14 semi final, has presented head coach Joahann van Graan with a dilemma.

On Baz & Andrew's House of Rugby [from 24:00 below], CJ Stander spoke about that final penalty, Hanrahan's 'big balls' and the challenge of going to The RDS to take on Leinster. 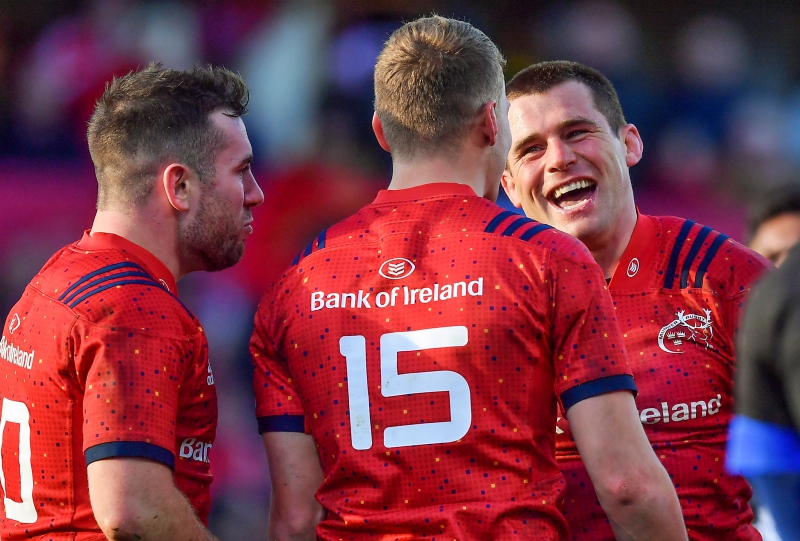 END_OF_DOCUMENT_TOKEN_TO_BE_REPLACED

Stander won two huge turnovers for Munster in the final quarter of their 15-13 win over Treviso. He was fortunate that Owens did not briefly see him drop a knee to the turf before he got into a jackal position that won Munster's match-winning penalty.

As the Italian side raged, Stander backed away with a polite, 'Thank you' to the Welsh ref.

This season has seen Stander produce some massive turnovers, for Munster and Ireland (see below). Still, it is a part of his game he wants to improve upon.

"That [turnover threat] is something I have worked on with the coaches - trying to bring something different to my game," Stander said.

"It was something [a threat] that I always really had but it wasn't something I had worked on much in the past couple of years. Before that, I gave away a couple of penalties that may have been 50/50 [calls], but I'm trying to make sure I can have an impact.

"Look, the game could have went either way but I'm glad it went our way. And for JJ to step up and take that kick, that's balls. That's big balls!"

END_OF_DOCUMENT_TOKEN_TO_BE_REPLACED

On Munster possessing four or five players in their matchday squads that are willing to take a dart at the posts, Stander says goal-kicking - and taking these scoring chances - was another area Munster wanted to improve on.

"I played outhalf when I was younger," he said, "but, now, I would never put my hand up if someone asked me to take a kick like that.

"Conor Murray in the (Champions Cup) semi-final against Saracens - what a kick. Rory Scannell, I remember that Glasgow game and his kick to take it away from them. And then JJ at the weekend; it was a big kick.

"It just shows you that if you have confidence in your training, you can do it."

For Stander, the Treviso game was 'stressful, but we got through it' by staying patient and knocking on the door until a scoring opportunity presented itself. That win tees up a last four clash with Leinster, with the victor going on to Celtic Park, Glasgow on May 26.

"Looking forward to The RDS and Leinster," said Stander. "We've always said that we're good mates off the pitch but everyone knows how much is on the line."

popular
Jamie Redknapp's face after going toe-to-toe with Roy Keane as Matt Doherty caught in the crossfire
Referee Mathieu Raynal puts Sexton in his place after TMO mess
Robbie Henshaw one of three Irish players deserving of Lions Test XV
QUIZ: How well do you know Manchester United players of the 2010s?
Solskjaer hits out at "outside influences" on referees over Man Utd decisions
Ellis Genge reveals death threats received after England's loss to Wales
Sexton compares "brilliant" Irish debutant Craig Casey to Jonny Wilkinson
You may also like
1 month ago
Munster secure victory after thrilling Connacht comeback in Galway
1 month ago
"It’s a jersey that I’d never swap or give away for no amount of money" - Ian Keatley
2 months ago
Danny Care accuses Munster players of 'rolling around and diving'
2 months ago
"It's something I have been pushing towards since I was very young" - Shane Daly
3 months ago
"It was rock bottom... I was going to pack my bags and start farming" - CJ Stander
3 months ago
"I could feel that connection at Soldier Field. Axel was there, 100%" - CJ Stander
Next Page