CJ Stander back to his mouthy, incessant best in Ireland victory over France

When pictures emerged, in early February, of CJ Stander's hammered, damaged face - posing with his brother-in-law near the Ireland team bus - few would have expected for him to feature again in the Guinness Six Nations.

Instead, within 10 days, he was back out and training with Munster. After featuring in that opening day loss to England, Stander was forced to sit out the wins over Scotland and Italy. As soon as he was cleared by the medics, Joe Schmidt got him back into Ireland came as fast as possible.

Stander is not just a motivating factor, for Munster and Ireland, through his relentlessness and playing abilities. He is also a cajoler and a driving force within those squads. He is always amped up and he rarely shuts up.

There was a lot of talk about Ireland being quiet and sullen in the past two games but, with Stander back in the pack, Ireland had a lot more going on today. They climbed into France from the start and set the platform for a victory that really should have been greater than 12 points.

In terms of hard stats, Stander was supreme. He topped the tackling and carrying charts for Ireland, sticking hits on 15 French players and making 32 metres off 18 carries.

He made a couple of plays, in attack, that had the home fans out of their seats. One carry saw him swat away Yoann Huget and Romain Ntamack before getting felled by Mathieu Bastareaud. Another move saw him time an inside switch perfectly to set Keith Earls away for Test try number 30. 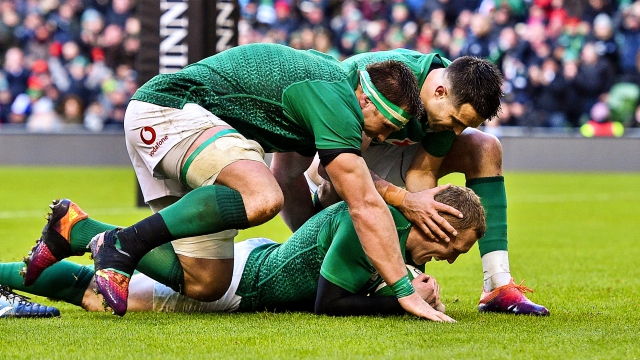 Stander, James Ryan and Iain Henderson were the driving Irish forces in a first half that ended with the home side on 94% territory and 81% possession. France had to stick 120 tackles, compared to Ireland's 21 (Stander made seven of those). Following Ireland's 26-14 win, Joe Schmidt commented:

"I don't think I've ever seen, in all my years, a team control another side in that first 40 minutes like we did."

END_OF_DOCUMENT_TOKEN_TO_BE_REPLACED

Through it all, as Ireland drove France back into their 22 and came in wave after wave, CJ Stander was mouthing off all the way.

Listening to the game through the referee's microphone and you could not miss Stander. Whether he was one foot or 30-feet away from ref Ben O'Keeffe, you could hear Stander. He was organising defensive sets, encouraging teammates to get back in the line, roaring on those that made big plays and always letting France know this was not their day.

CJ Stander is unreal on the ref mic. Screaming, encouraging and roaring from minute one, and he's still going!

With every scrum that packed down, Stander was bellowing. Sometimes he would call out a name - 'Killer' or 'Yes, Tadhg! Yes!' - while other times he was just yelling into the crisp Dublin sky or the straining bodies of the seven men he was shunting forward as best he could.

He was incessant and he was relentless. He does it to drive others on but it is also something has has done for years to stoke his own fires.

Patched up and ready for service, Stander came close to replicating the performance levels he delivered against New Zealand last November.

Next Saturday, in the white-hot atmosphere of Cardiff, his voice may well be drowned out by the tens of thousands of expectant Welsh fans.

For Ireland, he has to rise above that noise and out-do his excellent deeds of today. Ireland need him at his loudest, boldest and best.


popular
Six minutes was all Alan Connolly needed to score two goals and set up another
'Jesus Christ! How am I going to put up with this lad for nine weeks?!'
Gatland comments give insight as to why CJ Stander missed Lions call
Sensational scenes in Belfast as Antrim edge out Clare in a thriller
"Of the 37, Bundee Aki would be my 37th most expected selection and my worst rated"
South African media shocked by Lions omissions of Sexton and Ryan
The Garry Ringrose narrative around the Lions Tour is complete bull
You may also like
5 days ago
James Ryan and Iain Henderson may be fighting for one Lions spot
1 week ago
Tadhg Furlong declared 'single most important player for Lions touring party'
1 week ago
"It's going to be the biggest thing in this person's life, ever" - Rory Best reveals his Lions captain pick
1 week ago
When Gordon D'Arcy brought a coffee to a Joe Schmidt walk-through
2 weeks ago
Full Ireland ratings as Murphy-Crowe and Flood make the difference
2 weeks ago
Cliodhna Moloney's commendable attitude after Ireland's bumpy landing
Next Page