Had this been reviewed during the game, Stander could have received his marching orders.

CJ Stander put in another 80+ minute shift for Munster as they claimed a bonus point victory over Gloucester.

20 minutes into the game and Danny Cipriani was applauded for standing up - quite literally - to the charging Stander and winning a turnover for his side, 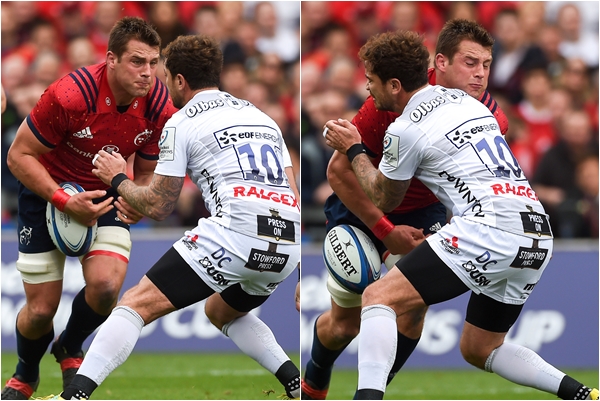 Eight minutes later and Cipriani was red-carded for a similar connection on Rory Scannell. However, where he connected with Stander's chest in the first instance, his hit on Scannell was shoulder on head.

Following the game, Gloucester head coach tried to keep mum on the sending off but eventually cracked and lambasted rule-makers. He declared:

"My view is simple, it’s spoiling the game if there’s no intent, I’m not going to say anymore... Some back-rowers make 25 tackles in a game, one wrong and they say he’s got a bad technique. But what about the other 24 that he did great. We can debate this over and over, the biggest thing I say is do we constantly want to see 14 play 15?"

Stander topped the tackle count for Munster by sticking 14 on Gloucester ball carriers. One of those connections - on Billy Twelvetrees - has now been highlighted by an aggrieved rugby fan.

Coming midway through the second half, Stander's shoulder connects with the head of Twelvetrees before Sam Arnold dips in to win a turnover for Munster.

END_OF_DOCUMENT_TOKEN_TO_BE_REPLACED

There was no sanction for Stander during the game but three other tackles targeting the head - including Cipriani's - resulted in cards. Stander is facing a nervous wait over the next 36 hours but he is likely to be given the all clear.

It would be a surprise if he was cited for the hit, unless World Rugby truly is seeking to send out a message to players on up-right tackling and shoulder striking. Following the game, Munster captain Peter O'Mahony insisted 'it not something a player has to worry about'. He added:

"The high tackle has been penalised forever in the game, do you know what I mean? It's never been allowed. It's not like guys are starting to do it now.

"No-one wants to give away penalties any more because of the pressure you put on yourself. So there's no guys doing it with intent. There are guys with good foot-work out there who will put you off balance. And 9 times out of 10 it is a genuine accident.

"But, as Johann [van Graan] said, by the letter of the law, if you are upright and you are high, you are in trouble... If you're awkward and you're upright, it's always been part of the game that you're penalised. It's just that it is in the spotlight at the moment.

It is worth keeping a close eye on this matter over the coming weeks and months.


popular
Roy Keane story shows the power he had at Manchester United
McGregor admits shout from Dustin Poirier's corner got inside his head
McGregor's first words to Poirier after defeat show where the damage was done
Dustin Poirier annihilates Conor McGregor to earn stunning UFC 257 victory
Khabib Nurmagomedov reacts to Conor McGregor's shock UFC 257 loss
Jolie Poirier certainly let her voice be heard after her husband's win over McGregor
He'll be remembered as a footballer but Keith Higgins has always been a hurler
You may also like
2 weeks ago
Munster secure victory after thrilling Connacht comeback in Galway
3 weeks ago
"It’s a jersey that I’d never swap or give away for no amount of money" - Ian Keatley
1 month ago
Danny Care accuses Munster players of 'rolling around and diving'
1 month ago
"It's something I have been pushing towards since I was very young" - Shane Daly
2 months ago
"It was rock bottom... I was going to pack my bags and start farming" - CJ Stander
2 months ago
"I could feel that connection at Soldier Field. Axel was there, 100%" - CJ Stander
Next Page