Ciara Griffin is the sort of player that leads by example when she is on the pitch. She will never ask a teammate to do something she would not do herself. She will go through the wringer for her team.

END_OF_DOCUMENT_TOKEN_TO_BE_REPLACED

When it comes to making speeches, though, her Munster and Ireland teammates know what to expect from 'Junior' too. She is very much in the Paul O'Connell mould - demanding every ounce of effort from each player - but there are a couple more tears.

On House of Rugby Ireland, Griffin told hosts Ian Madigan and Eimear Considine (listen from 18:30 below) about her three cracks at getting into the national squad, breaking her leg in her first training session and her reaction to being named Ireland captain. 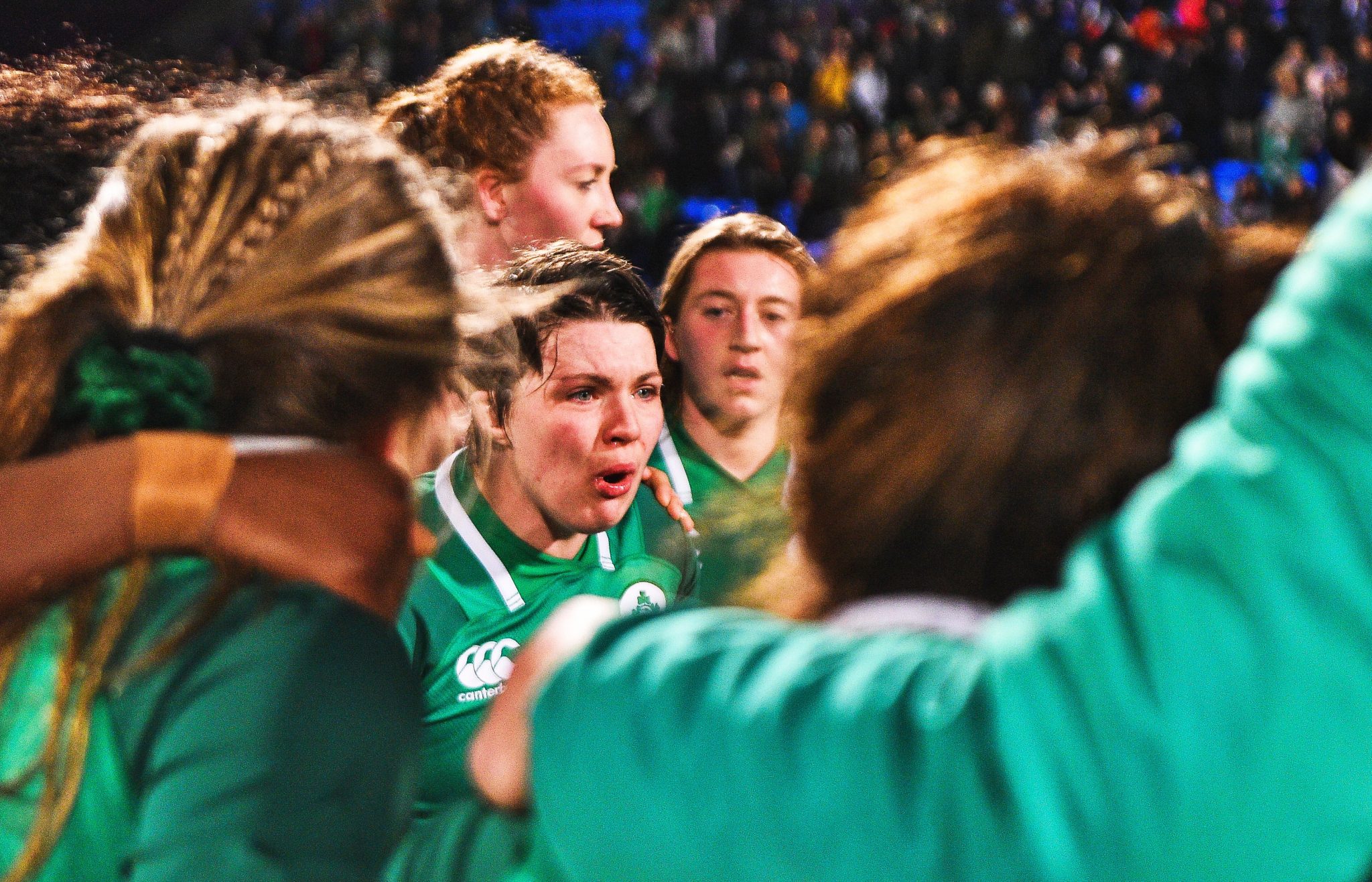 Ciara Griffin sheds a tear as she addresses her Ireland team after a win over France. (Credit: Sportsfile)

Griffin has racked up 33 appearances for Ireland since she made her international debut in 2016. She can still recall getting the phone call from then Ireland coach Tom Tierney.

"He rang me and said, ‘Look, we’d like you to come onto the Irish squad’. And I’ll never forget it. I was just over the moon... Oh yeah, of course. I bawled my eyes out! Delighted. And then we went up and we beat Leinster in the [Interpro] final and I was just buzzing. I’ll never forget that campaign in 2015, up in Thomond Park, and we beat them, and it was amazing."

The Kerry native's joy was short-lived as she did not even make it through the first hour of her first training session with the senior squad.

"It was like, ‘Yeah, I’m ready now. I know I can go into this (Ireland) squad’. And then we had our first camp in October and I broke my leg in my very first contact drill.

"It was just, like, you know me, I love contact drills. I was like, ‘Right, this is my bread and butter. I’m going to love this. Savage.’ Simple, I went into a tackle and just the way I was tackled and landed, my leg just snapped. I heard it crack and was like, ‘Nah, definitely, it’s fine’. So I got the physio to strap. I say, ‘Just strap it there’.

"I remember, I ran a length of the field. And it felt a bit like… it kept giving way a bit. And I was like, ‘Oh there’s something wrong here. It’s not fully right’. And, sure, then I got a scan and it was fully broken. Oh, for God’s sake."

END_OF_DOCUMENT_TOKEN_TO_BE_REPLACED

"Yeah," Griffin noted. "It’d have to be a broken femur or you’d have to be unconscious. Other than that, you should be in the defensive line." 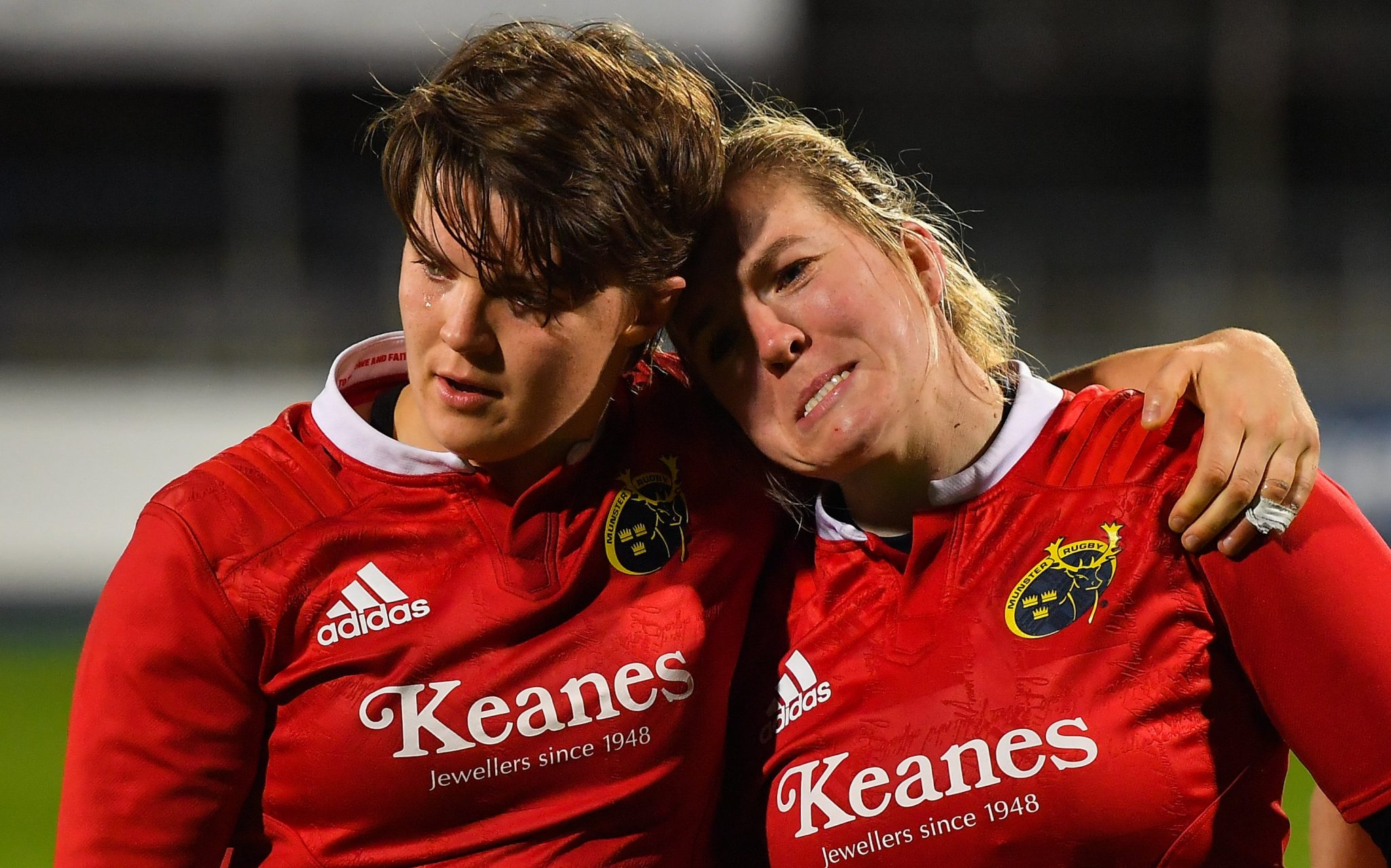 Niamh Briggs, right is consoled by Munster captain Ciara Griffin, after her last minute conversion to win the game and the championship dropped short, in 2018. (Credit: Sportsfile)

"Yeah, I’ll never forget it," Griffin continued. "I remember when it happened, it was pure surreal.

"Because you know, sometimes when you sprain your ankle, you hear a crack. It was probably just a sprain. Sure, I got this scan and saw it was literally in half. And I was like, ‘OK’.

"I remember, actually, Briggsy, she was brilliant. She brought me up to camp, that time. I was petrified about telling mum and dad. I remember, I was sick to my stomach at the thought of telling them. I was in the car with Briggsy and she was weak with the way I was explaining it.

Griffin was back playing in a couple of months but it was not until her third crack at Ireland camp until she fully took the step up and was awarded her international debut. Within two years, she was receiving another phone call from an Ireland head coach.

"To be honest," she said, "I never thought I'd be captain. I always just wanted to play for Ireland, be a back-rower and be a solid player. That was always my goal. Go out, cause havoc and enjoy it!

"I never saw myself as a leader, but I'll never forget the phone call from Adam Griggs. I was actually teaching, that day, and I got a missed call from Adam. I was like, 'Oh Jesus, I'm getting dropped! Feck it, I must have done something bad!'

"I had to go back into the staff room and say nothing about it but, internally, I was freaking out. The first person I called, after I spoke with Adam, was my dad. He was over the moon. You could hear he was shocked but he was thrilled."

There was a call for her partner Damien O'Sullivan, with whom she tied the knot over the Christmas holidays, but there was one thing missing. There were no tears.

Griffin may have been surprised by the appointment, but no-one that knew her and played with her was.

2021 will be her fourth year as Ireland captain and she will be hoping that all the hard work put in since the first lockdown ended, last autumn, will pay off when the Six Nations (hopefully) and World Cup qualifiers (hopefully, too) kicks off next month.