Bundee Aki goes after Cardiff No.8 after silly hit on Caolin Blade

It all kicked off.

That was the cry coming from a few of the Connacht players as jubilation quickly turned to consternation. 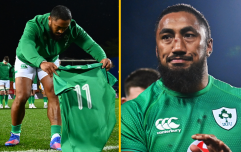 END_OF_DOCUMENT_TOKEN_TO_BE_REPLACED

Connacht beat Cardiff Blues 29-22 at The Sportsground to secure Champions Cup rugby for next season, and tee up a Guinness PRO14 quarter-final with Ulster.

Andy Friend's side scored four tries and withstood some second half pressure to beat their closest rivals, securing third place in Conference A. Jack Carty, Paul Boyle and Jarrad Butler were all class, as was Caolin Blade.

The Connacht scrum-half scored a try in the first half, after a superb Boyle offload, and played the guts of 80 minutes. He was replaced with 68 minutes gone but replacement Kieran Marmion was subbed off after taking a hefty blow preventing a Josh Harries try.

Blade came back on to help steer Connacht to a crucial win and it was he that kicked the ball out when the hosts turned the ball over near halfway.

END_OF_DOCUMENT_TOKEN_TO_BE_REPLACED

Perhaps frustrated at the nature of his side's defeat, Cardiff No.8 Seb Davies made a late and silly tackle on Blade to spark a flare-up.

Blade was quick to his feet after being tackled and Connacht centre Bundee Aki swooped in to protect his scrum-half.

Cardiff's Lloyd Williams then need some protecting as he yanked Bundee Aki to the ground before covering up as the Ireland star vaulted up for some pay-back.

All told, the melee lasted only 10 seconds before calmer heads prevailed.

Next up for Connacht will be a visit to Thomond Park and nice, relaxing game with Munster.


popular
Jamie Carragher on the two Man United players Erik ten Hag can't trust
"I went up to the Italians and gave them a big auld shoulder" - Paul O'Donovan does it again
Man United have 'decided to sell' promising midfielder James Garner
Wexford Under-20 lights it up as Ferns win their first ever county title
Wexford, Waterford and Kilkenny down some good men as Australia calls
Graeme Souness under fire for calling football a ‘man’s game' while sat with Karen Carney
Luke Chadwick recalls furious Alex Ferguson reaction when he rejected loan move
You may also like
1 month ago
"The world came crashing down around me, at that time" - Cian Prendergast
2 months ago
Mack Hansen on the English club that almost signed him before Connacht
2 months ago
Two years after Leinster heartbreak, Cian Prendergast is Ireland's best young player
3 months ago
8 Irish players we're trying our hardest not to get too excited about
3 months ago
URC chief explains why Irish Interprovincial Championship was not revived
3 months ago
Mack Hansen was not backing down when a 22-stone South African prop came for him
Next Page