He had to walk for that.

Sale Sharks winger Byron McGuigan lost the head completely and was red-carded for a couple of dangerous slams on Saracens' Nick Tompkins.

With Saracens leading Sharks 13-0, early in the second half, a penalty went against the visitors and Tompkins was on the mind-up. 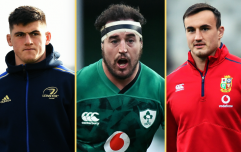 END_OF_DOCUMENT_TOKEN_TO_BE_REPLACED

The Wales star leaned down to rub the head of Tompkins after the penalty went to Saracens, and McGuigan did not take too kindly to the gesture.

Up he vaulted and Tompkins was in for it. McGuigan lifted him and slammed him to the turf. Still not finished, he then dangerously dragged Tompkins to the ground again, slamming his head into a padded pitch divider.

It's gone from bad to worst for Sale! 😬

Sean Maitland rushed in to pull McGuigan off Tompkins and it all kicked off as players from both sides waded in.

After match officials and peace-keepers calmed everyone down, and a quick check of the replays, a red card was shown and that was it for the winger. 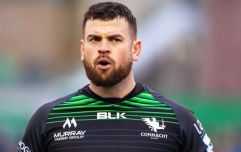 END_OF_DOCUMENT_TOKEN_TO_BE_REPLACED

With Sale down to 14 men, Saracens set about closing out their winning position.

Maitland and Vincent Koch scored tries for Sarries. Ben Curry got a try back for Sale but the hosts responded with a Max Malins try.

Victory would see Niall McCall's side leap to second in the Premiership table, just a handful of points off leaders Leicester Tigers.


popular
From Canada to Carlow in the name of hurling: Nicolas Redmond's journey to the Fitzgibbon Cup
Kerry's captain selection for 2022 sums up the problem with their outdated system
Chelsea forced to change Stamford Bridge changing room after Liverpool complaint
Jesse Lingard 'angered by lack of respect' shown by Man United
"It must be difficult to say no, having won a game and heading back together"
"Oh my God!" - Anton Ferdinand on Roy Keane's infamous half-time rant at Ewood Park
Outrage after Sadio Mane allowed to play on for 10 minutes after being knocked out
You may also like
2 days ago
Irish provinces learn Last 16 opponents after hectic Champions Cup finish
2 days ago
Simon Zebo sets European record as Munster set for English opponent in Last 16
2 days ago
Connacht lose nail-biter in Paris as Wayne Barnes doesn't stand for foul language
3 days ago
Nathan Doak comes of age as Ulster survive almighty Clermont scare
3 days ago
Former Montpellier star has Sean O'Brien in stitches with Leinster training story
6 days ago
Predicting Ireland's starting XV for Wales after Andy Farrell squad announcement
Next Page