"I'm sure Bundee would agree it was a red card. He caught him straight in the chin."

Bundee Aki was back and motoring for Ireland, on Saturday, but his high tackle on Billy Vunipola saw both men leave the field of play. Concussion protocols for Vunipola while the Ireland centre was sent off.

Following Ireland's 32-18 victory over England, Aki sought out Vunipola to check on how he was faring. He also spoke with referee Mathieu Raynal to try explain what must have been going through his mind when he saw the giant England No.8 steaming towards him.

"It's never nice to see those head knocks, it really isn't," says former Ireland star Fergus McFadden. "And the force it must have taken to knock someone like him out. The amount of contacts he would often take in games and he's absolutely fine. I don't think there's any defending Bundee."

On the latest House of Rugby Ireland [LISTEN from 27:30 below], Ian Madigan spoke with real clarity, and a player's insight, into why Aki left the referee with no choice but to send him off. 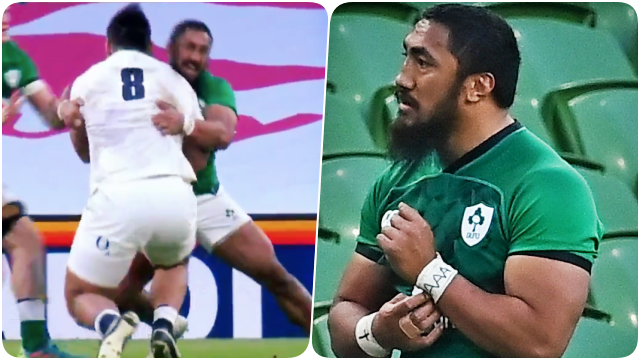 END_OF_DOCUMENT_TOKEN_TO_BE_REPLACED

"The rules are the rules but... I'll look at it again, but Billy seemed to be on a downward motion, certainly with his head. If there's any contact there, they are looking at that, at this moment in time."

The collision arrived with 17 minutes to go and with Ireland leading 26-6. Vunipola hurtled towards Aki, who stood up and went for a shoulder on chest impact to stop the England forward in his tracks. Unfortunately, that contact momentum saw Aki's shoulder drive up and smack the chin of Vunipola, leaving him in a bundle.

END_OF_DOCUMENT_TOKEN_TO_BE_REPLACED

There was relief, all around, when Vunipola was able to get to his feet again and no stretcher was required as he was replaced for the final 16 minutes.

Asked if he agreed with Farrell's take on the Raynal decision being a tough one, Madigan said, "No, no, it's a red card.

"I know both players and supporters are probably getting a bit frustrated with the number of cards we've seen. But, for me, until the players start realising, 'Look, these are the rules and I've got to start changing my technique', we're going to keep seeing them.

"I think what's actually going to happen is that players will go, 'I'm in a bad position here', and we're going to see guys starting to pull out of tackles and being a bit more passive. And I do think it could create a bit more space on the pitch.

"But you can't carry your shoulder at that height any more. It's not like Billy's a small guy - he's big and he's tall - and it's scary when you see a big guy like that getting knocked out. There was serious force behind it and, for me, it was a clear red. I'm sure he's going to get a lengthy enough ban, off the back of it."

If there is a ban following that sending off, and there most likely will be, it will be Connacht that feel the loss keenly, especially as they have a Challenge Cup game, away to Leicester Tigers, on April 3.


popular
“Players flourished when Roy Keane left” - Rio Ferdinand on why Keane was a 'detriment' to Man United
The FootballJOE Pub Quiz: Week 50
Man United considering loan move for Christian Pulisic
Specsavers troll former Liverpool star for Darwin Nunez headbutt claim
"To be able to call myself the fastest man in Irish history is just amazing" - Olatunde overjoyed after record-breaking run
The moment Israel Olatunde realised he qualified for the Euro 100m final is what it's all about
"I went up to the Italians and gave them a big auld shoulder" - Paul O'Donovan does it again
You may also like
2 weeks ago
“My confidence was on the deck" - Aaron Connolly explains why he has made the move to Italy
2 weeks ago
Every Irish transfer in football, this summer, as several big deals get done
3 weeks ago
Six Irish players make damn impressive 'World XV' that would take some beating
3 weeks ago
The frontrunners for Ireland's 33-man squad for the 2023 World Cup
4 weeks ago
All Blacks media manager explains why Ian Foster appearance was cancelled after Ireland defeat
4 weeks ago
Warren Gatland selects nine Irish players in his strongest Lions XV, right now
Next Page