Bundee Aki had one hell of a game against South Africa to prove he most certainly is of Test match standard.

The 27-year-old made his Ireland debut at the Aviva Stadium and proved he was like so many of us, trying and ultimately failing to give Amhrán na bhFiann a resounding go.

He fared much better at Ireland's Call and better still once battle commenced. South Africa were trampled, throttled and thumped, with Aki and CJ Stander leading the way.

END_OF_DOCUMENT_TOKEN_TO_BE_REPLACED

The centre was initially credited as the game's leading tackler but ESPNscrum has since awarded him 15 successful hits, instead of 17, Stander was upgraded from 15 to 16 so leads the way.

However, Aki achieved an outstanding four turnovers in the game, with three of them coming in six second half minutes. The match stats are comprehensive but don't cover turnovers, but we have watched the game back several times and are giving the Auckland native all the credit he is due.

Aki's first impact on affairs arrived after there was a minute on the clock as he teamed up with Johnny Sexton to rip the ball from Springboks prop Coenrad Oosthuizen, who was unfortunately injured in the collision. Both men forced the early turnover.

END_OF_DOCUMENT_TOKEN_TO_BE_REPLACED

His next moment arrived in attack and from the re-start, after Sexton had made it 3-0. Two forwards lifted Peter O'Mahony but Aki pounced on the ball when the blindside could not cling on. His eyes darted up and, seeing no-one in his way, he scurried forward another five metres before he was hauled down.

He made a couple of lusty tackles, on Elton Jantjies and Lood de Jagr, as the first 10 minutes set the tone for his match. Full-on in defence but only fleeting glimpses of Aki the attacker.

The centre bounced off Boks hooker Malcolm Marx, on 10 minutes, but the visitors spurned another good attacking platform when Jantjies failed to find Siya Kolisi. The Irish line-speed was forcing silly Springbok errors.

Joe Schmidt will be pleased with Aki's decision-making and defensive awareness on his vital tackle on Damien De Allende, midway through the half. Reading the Springboks' play and backing himself to make a play, Aki shot up on his opposite number and wrestled him to the deck. 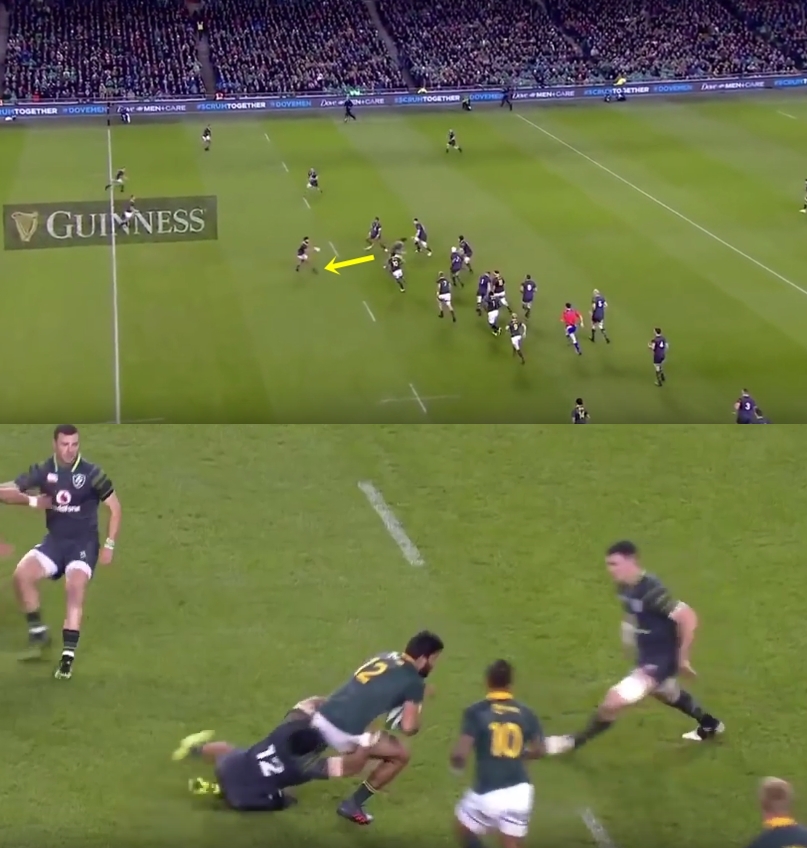 END_OF_DOCUMENT_TOKEN_TO_BE_REPLACED

Aki was constantly used as a dummy runner in a number of Irish set-plays, in the first half. This tactic paid off when they got quick ball out from a scrum on halfway, over near the left wing. Aki sold it with a yell and his hands presented for the ball, where in reality it was that classic Ireland move - the Sexton wraparound.

The Connacht man tied up Ross Conjé and Jesse Kriel, giving his outhalf time to link up with Robbie Henshaw for the one-two and put Andrew Conway into space for a massive gain all the way into South Africa's 22.

Conway's try had Ireland 14-0 up when Aki's defensive steel was again demonstrated, brick-walling de Jagr on one carry and, four South Africa phases later, jarring the ribs of Eben Etzebeth and taking him to the turf. This period of play, just after the half hour mark, was the Boks' best but it was Stander that ended their involvement in the Irish 22 with a massive turnover after Murray had felled Kolisi.

Ireland pressed for another score before half-time but were denied. Aki made two of his five carries in injury time but was smothered handily enough by the Boks. The half ended with him unable to hold onto a Henshaw pass to end a promising Irish attack and a fantastic half of rugby for the hosts. South Africa, though, had been pretty brutal.

There was another big defensive play early in the second half as Aki teamed up with Conor Murray to not only shut down Kriel but drag him into touch and win a turnover for his side.

Somehow, soon after and in the space of four second, Aki and Stockdale combined for three missed tackles all of the one man - Boks fullback Andries Coetzee - before Kearney finally intervened.

The centre more than made up for it on 50 minutes when his big hit on loosehead Tendai Mtawarira forced another turnover. Himself and Sean O'Brien forced a fumble from 'The Beast' as South Africa's error count grew.

Remarkably, Aki forced his third turnover of the half just 90 seconds later as he dislodged the ball from Francois Louw in another hefty tackle. He was coming into his own now. Getting a taste for this Test match rugby stuff. 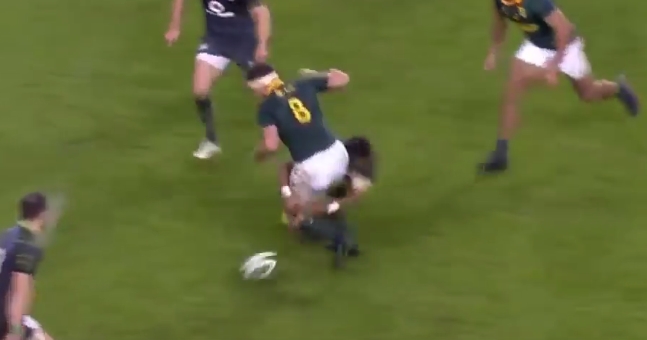 On 54 minutes, the Connacht man took Kriel to the deck and Rhys Ruddock, on for O'Mahony, won a penalty for Ireland after a superb show of leg and upper body strength at the ruck.

The Aki dummy run was in full effect again for a set-play, off an Irish lineout, that tore the guests to shreds on 71 minutes. Once again, he ran hard on an inside angle with sub scrum-half Kieran Marmion finding Sexton and him switching back inside to Stockdale on the charge. The Boks were reeling and Ruddock powered over for a try that ended the match as a contest.

Still, there was time to send a message to the world. The forwards were the architects of the third try, for Rob Herring, but the backs were not finished yet.

Aki was denied his fifth turnover of the match when referee Barry O'Keefe called play back for an earlier knock on. He would have to settle for the four. And Ireland would settle for four tries, soon after, when the highly impressive Stockdale dived over in the left-hand corner.

81 minutes after it started, it was over.

Aki arrived in Ireland back in 2014 and found a dog-track circling his new home, The Sportsground. Three years later and he looked right at home on an altogether grander stage.