Carney played both League and Union during his career and has carved out a career as a presenter since his retirement from professional rugby.

Carney was quick to point out that Wotton had made a sizeable exclusion from his statement.

The Tans are at it again. pic.twitter.com/39dh0guRpr 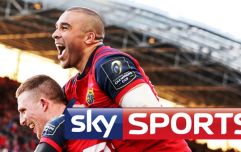 END_OF_DOCUMENT_TOKEN_TO_BE_REPLACED

"Can we start with a geography lesson and a sovereignty lesson as well, please?", Carney said.

"I saw a quote included from the Irish Rugby League chairman yesterday welcoming the return of Great Britain and Ireland. He was the only person in the whole press release to reference the fact that an independent country, Ireland, is also a part of this make-up.

"Unless that's changed, I'm going to go with Great Britain and Ireland."

Carney was the first Irishman to play for the Lions in 46 years, and he scored eight tries in 14 appearances between 2003 and 2006.


popular
"Every team did it!" - Paul O'Connell on Roy Keane comment to Ronan O'Gara that he couldn't deny
Five confirmed changes and guidelines to have big impact on 2023 Six Nations
Everton release brutal 59-word statement to confirm Anthony Gordon departure
"It's crazy to think Bundee Aki might come straight in and start against Wales"
Owen Farrell praises Johnny Sexton in revealing interview ahead of Six Nations
British publication urges Gareth Southgate to claim Evan Ferguson for England
CCCC order replay of All-Ireland club football final
You may also like
1 week ago
Roy Keane gives his verdict on Mikel Arteta's touchline behaviour
1 week ago
Chris Eubank admits that he regrets "ugly build-up" to fight with Liam Smith
1 week ago
Liam Smith throws uppercut from the gods to stop Chris Eubank in fourth round
2 months ago
Ricky Hatton's comeback fight on Sky Sports highlights just how far boxing has fallen
2 months ago
Rio Ferdinand defends Cristiano Ronaldo's decision to snub Gary Neville
3 months ago
The Sky Sports GAA pundits that RTÉ and BBC should snatch up
Next Page