With news that Tadhg Furlong and Jack Conan are fit to face Wales - and Robbie Henshaw is out for the championship - Joe Schmidt's selection choices for the Wales game look clear.

Ireland's backline clicked into gear against Italy and Munster's Chris Farrell is set to replace Henshaw in midfield. In the pack, the big calls are likely to be whether to retain Jack McGrath and Devin Toner for Cian Healy and James Ryan.

The position that caused the most debate, on The Hard Yards podcast, was what player would be selected as backline cover on the bench [from 17:00 below]. Wales are expected to bring serious heat to Dublin, next up, and the 'finishers' could prove crucial in the winning or losing of the game. 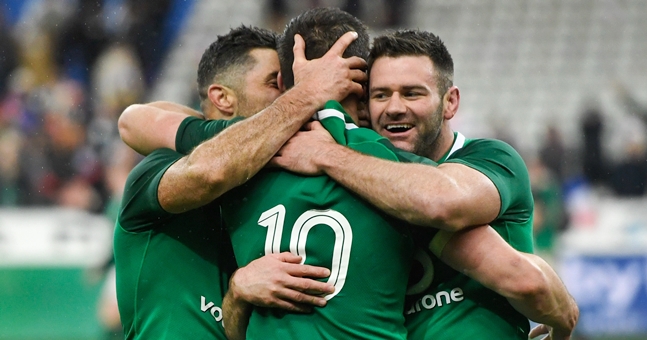 Larmour made a couple of nice carries against Italy and stepped two forwards on a postage stamp before accelerating away into the 22, and setting up an overlap that should have led to a Dan Leavy try. In defence, however, he was rash with one missed tackle and caught ball-watching for the Azzurri's final try.

"It was great. He got the experience and got the exposure. He knows what's expected of him now. Joe has given him a bit to chew on there, a bit of homework.

"I think he'll say, 'You did well but you have a couple of bits to work on... You know it, now go away and work on it'. Larmour is still going to be involved, of course, but Joe's going to go with Ferg."

END_OF_DOCUMENT_TOKEN_TO_BE_REPLACED

McFadden is one of Schmidt's trusted lieutenants but his selection often sparks debate among the Ireland supporters. He was in good form for Leinster, before the Six Nations started, and was on the pitch for the Parisian comeback that ended with Johnny Sexton's drop goal clincher.

The other option is one suggested by myself - Munster's versatile, pacy Andrew Conway. "I hadn't thought about Conway," Downey conceded, "but it's going to be interesting to see Joe's mind-set and what his pecking order is.

"Because he often falls back to who he can rely on when they are in the trenches; who's reliable. It's a big game against Wales - who do you trust? That's what makes me think it will be Ferg. He's solid... no mistakes, that's what you need."

Larmour, Conway or McFadden. Three men all in the mix for the No.23 jersey. That's how tight it is for spots in this Ireland squad.


popular
McGregor admits shout from Dustin Poirier's corner got inside his head
Roy Keane story shows the power he had at Manchester United
McGregor's first words to Poirier after defeat show where the damage was done
Dustin Poirier annihilates Conor McGregor to earn stunning UFC 257 victory
Khabib Nurmagomedov reacts to Conor McGregor's shock UFC 257 loss
Jolie Poirier certainly let her voice be heard after her husband's win over McGregor
He'll be remembered as a footballer but Keith Higgins has always been a hurler
You may also like
23 hours ago
Two uncapped Munster players backed for Ireland's 2021 Guinness Six Nations squad
5 days ago
"That was the one game that I cried after" - Mike McCarthy
5 days ago
QUIZ: You'll need to be a massive Ireland fan to get all these one-cap wonders
1 week ago
Ireland's best uncapped prospects for the Guinness Six Nations
1 week ago
Darren Cave tells House of Rugby about one part of rugby he definitely doesn't miss
1 week ago
"He's ruptured his hamstring off the bone and he’s trying to get up into the defensive line"
Next Page