When we met Sean O'Brien, last month, he told us he was solely focused on playing for Leinster. 40 competitive minutes later and he wants Ireland's 7 jersey back.

The Leinster flanker has been savagely hungry to face the All Blacks ever since Ireland let a 20-7 half-time lead slip against them in 2013.

Ireland should have won that day and they should have won in the nations' previous meeting at AMI Park, Christchurch in 2012. New Zealand took both victories; it's what they do.

If O'Brien owns a calendar - he is old school so we reckon they do - he will have ringed November 5 and 19 as two games he simply must play in. In late September, he told us:

"It's going to be an interesting November and they're the games you want to play... I need to get playing with Leinster first."

END_OF_DOCUMENT_TOKEN_TO_BE_REPLACED

He has played 40 minutes against Richmond, for Leinster 'A', in the B&I Cup and, on Sunday, played another 40 against Montpellier in the Champions Cup. He's not messing around here. He needs to play the All Blacks.

"Hopefully I’ll get through this weekend now," he told us on Tuesday, "get a bit of form and put my hand up."

END_OF_DOCUMENT_TOKEN_TO_BE_REPLACED

O'Brien was far from happy when, sticking to their guns, the Leinster coaches took him off at half-time at Stade Altran with his side trailing 14-3. He commented:

"The coach made a decision to take me off at half-time, and I wanted to stay on for another bit. But look at that level, not having played for nine months, it’s about getting back into it, getting more minutes under the belt and moving forward to just get that bit of sharpness back. If I was out there trucking around and not doing much for the next 10 minutes I wouldn’t be adding much value to the team.

"While you never want to come off, it’s probably the right thing to do in this situation.

"Your adrenaline is going and you want to add to the team, you want to try and win the game. That’s just the way it is, that’s the competitive nature we all have in us." 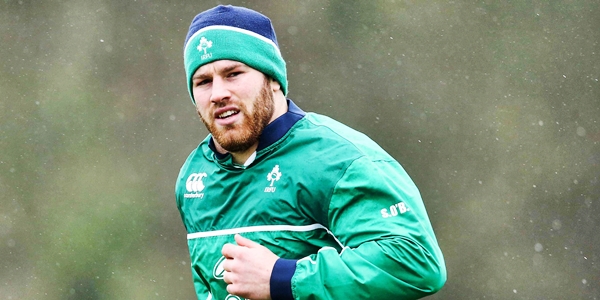 Leo Cullen told the travelling Irish media that O'Brien was "pissed off" at the decision to bench him. The flanker said:

"Yeah, it is [close to the mark]. I think if you ask any player when they’re taken off, they’re always going to be pissed off. It’s a natural reaction, I think, but you just suck it up and you realise that there’s a bigger picture to look at here and you don’t be selfish about it."

Connacht are up next, at the RDS on Saturday, and O'Brien is desperate to get as much out of himself - and cause as much damage - in his time on the pitch. His eyebrows raise when 'an hour' is mentioned. He'll take that.

"You don’t really look at individual threats, but you do look at Connacht's overall package and they’re a good balanced back row and a very good pack with very good forwards so they all have their own individual strengths and we’ll have to keep an eye on those lads.

"They’ll have to keep an eye on us too so that’s just the way it goes."

Keep an eye on us.

We'll all be keeping an eye on O'Brien. Get through this and he may get his wish in Chicago.

Getting his way is an altogether different matter.

Colm Parkinson chats to Kerry GAA legend, and author, Kieran Donaghy in a special edition of The GAA Hour. Listen below or subscribe on iTunes


popular
World Cup 2022 Day 10: All the major action and talking points
Iran demand action by FIFA after USA team change flag on social media
Canelo Alvarez duped by fake Lionel Messi Instagram post
"I have equal love for football and hurling" - Sheehy set for two Leinster finals in two hours
World Cup 2022 Day Nine: All the major action and talking points
"I appreciate Moycullen now more than ever" - Cooke's American lifestyle from a Moycullen base
For Ballyea, this journey all started out in a purple Toyota Corolla
You may also like
3 days ago
Former England international admits he wishes he had played for Ireland
1 week ago
Two baffling omissions as four Ireland stars make World Rugby 'Dream Team' of the Year
1 week ago
Josh van der Flier claims World Rugby Player of the Year at Monaco ceremony
1 week ago
"Highlight of my Ireland career" - Behind the scenes as Jack Crowley and Ross Byrne covered for a legend
1 week ago
Bundee Aki reminded us all of his best qualities, on a night Ireland couldn't do without him
1 week ago
Peter O'Mahony delivered some fitting Jack Crowley comments after surprise Test start
Next Page