"It's not quite alien overlords, as we've talked about before but we're certainly in very different circumstances right now."

Week two of remote recording for Baz & Andrew's House of Rugby and it was a pleasure to welcome Jerry Flannery back to the fold.

The former Munster and Ireland star was reunited, over Skype, with Barry Murphy and Andrew Trimble for a bumper House of Rugby episode. The show also featured interviews with Jack Carty (Connacht & Ireland), Mark O'Keefe (Rugby United New York) and Sam Brown, a loyal follower of the show who is recovering after being struck down with a moderate case of Covid-19. 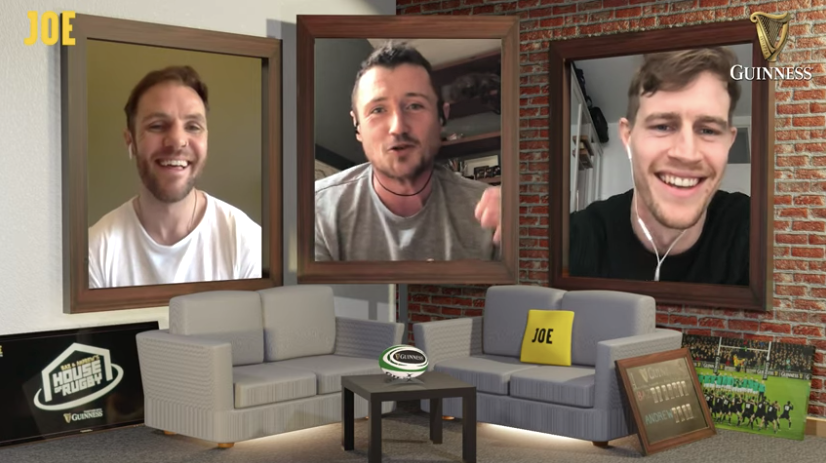 The gang are racing through Netflix and Disney+ but Barry Murphy is also dipping back into the back catalogue of classic rugby matches that the likes of Sky, BT and eir Sport are showing, as well as the ones available on YouTube.

ANDREW: Was it still that era where players naively thought that if their hips told the defender one thing, then the defender would fall for that. That was probably just about the end of that, was it?

Other classics well worth a watch are Leinster's 2012 European Cup semi-final win over Clermont, Connacht's 2016 Guinness PRO12 final win over Leinster and Munster's Miracle Match against Gloucester... to name but a few. Also covered on the show:

END_OF_DOCUMENT_TOKEN_TO_BE_REPLACED


popular
The SportsJOE 12 o'clock quiz | Day 75
Justin Gaethje tells Conor McGregor to wait his turn
The SportsJOE 12 o'clock quiz | Day 74
SportsJOE 2000s Football Quiz | Round 4
SportsJOE 2000s Football Quiz | Round 3
QUIZ: Can you name the Football Italia cult heroes? | Part 2
The SportsJOE 12 o'clock quiz | Day 73
You may also like
1 week ago
Baz & Andrew's House of Rugby - Mike Brown on past battles with Ireland
2 weeks ago
"He walks into the dressing room and Pienaar goes, ‘We can’t win’!"
2 weeks ago
Baz & Andrew's House of Rugby - Finn Russell on life in Paris
3 weeks ago
Ben Youngs talks about Leicester Tigers' infamous Tuesday training sessions
3 weeks ago
Ryan Baird on his physical and mental preparations to hit rugby's return running
4 weeks ago
"He's a massive human being with an unbelievable skill level" - Jean De Villiers
Next Page