Is there anyone out there who thinks the haka hasn't lost its mystique?

Who can forget Willie Anderson nose to nose against Wayne Shelford in Lownesdowne Road? Or Sébastian Chabal and his France side facing up to the All Blacks as they went on to knock them out of the 2007 Rugby World Cup or even Wales refusing to budge first after the pre-match ritual in 2008.

The haka is a war dance, performed by the Maori people of New Zealand before they go to battle and traditionally was meant to intimidate opponents.

END_OF_DOCUMENT_TOKEN_TO_BE_REPLACED

And on the rugby field, it did. The haka was one of the great sites of sport and would whet the appetite as fans would wonder could their team take down the All Blacks.

But common consensus is that it lost its novelty somewhere along the way.

It still has its moments, there is no doubt about that.

The send-off to Jonah Lomu was nothing short of spine-tingling.

Or the tribute to an Irish rugby coach that passed away earlier in the year.

But at times, you can't help but feel that the ritual is shoved in the public's faces, whether it be the haka being performed in a garden in Limerick.

END_OF_DOCUMENT_TOKEN_TO_BE_REPLACED

Or a Supermacs in Kildare.

It feels like it is everywhere and has been overdiluted in recent years.

And with three Super League team set to perform the haka in front of the Lions, it means that Warren Gatland's men will endure it in total six times.

Gatland was speaking to reporters on Thursday and ruffled a few feathers in New Zealand by saying facing up to the haka will not be intimidating.

"The more times you face up to it, you don't mind it, it's a motivational thing, it's not intimidating.

"And I'm pleased my players will face it more than once. You become familiar with it. It becomes part of regular preparation for a game."

END_OF_DOCUMENT_TOKEN_TO_BE_REPLACED

Two men that are also familiar with the haka are Matt Dawson, who faced New Zealand numerous times in his career, and former All Black Andrew Mehrtens.

They were speaking on 5 live Sport on Thursday about the haka and it is clear how they felt about it.

"I say commercialised to a degreee, I remember seeing Jonah Lomu doing a haka with a credit card brand."

And he followed that up with saying what the haka used to be and what it is now,

"We all know about the haka, we see it and we can here. There were days, probably only 15 years ago or so, where you wouldn't really hear the haka when you were in Twickenham... I mean you could hear it in the distance but now they've got microphones under their noses, it's belted all around the stadium.

"I think [Warren Gatand] is right,  it has lost a little bit of the mystique behind it."

"I absolutely agree with you, it's become a little bit...commercialised and almost a product itself.

"And I think you always have to remember it's a part of it." 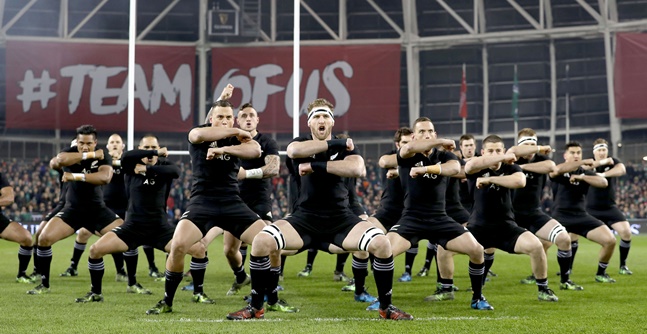 For rugby supporters in the Northern hemisphere, the haka used to only be seen in the Autumn during internationals when they came touring to Europe.

But it's different now, back then it was a novelty but that is no longer.

Extensive coverage of The Rugby Championship now easily available and a tendency for it to be shared all over social media means that the haka is hard to escape or at the very least just simply not what it used to be.

Economics states the law of diminishing marginal utility, which means that after consuming something for so long you begin to get sick of it and that is what has happened the haka. It has been done so much, and over the coming weeks will be done so much that the appetite for it will 'diminish'.

But it's not going anywhere, as Mehrtens, a 70 cap New Zealand International, said,

"A lot of New Zealanders can get precious about the haka, I think it's wrong when we start dictating to teams overseas 'well this is how you should receive the haka'"

Saying that, if the Lions series so happens to be tied one a piece rugby fans will, undoubtedly, be excited as ever when the All Blacks perform their war dance once more.


popular
Paul O'Donovan busts the cliches and leaves the mystery behind him in one more emphatic interview
Ireland's rowing heroes on what everyone was shouting as they beat Team GB to bronze
Next time someone doesn't cut you slack for commuting to training, show them Joe Canning's words
UFC legend brands Conor McGregor's antics a 'cry for help'
Warren Gatland with great response after being asked if he'll set up Twitter account
Donegal's Brendan Devenney responds to Jim McGuinness' claims about the game being "soft"
"Ah I suppose it's fine" - Paul O'Donovan and Fintan McCarthy are Olympic gold medallists
You may also like
2 years ago
James Haskell's first Lions Tour encounter with Tadhg Furlong was certainly unforgettable
3 years ago
Garry Ringrose only needed two games to expose regrettable Warren Gatland decision
3 years ago
Warren Gatland reveals concerns about Fields of Athenry before Lions Tour
3 years ago
Ben Te'o was rightly livid after some sneaky jersey swapping on the Lions Tour
3 years ago
Two Ireland stars included in French outlet's Team of the Year
3 years ago
2017 ended the debate about Johnny Sexton being Ireland's greatest outhalf
Next Page