The final game of 'Super Saturday' served up a tantalising heavyweight clash.

Going into the game, New Zealand had never lost a pool match at a World Cup and it was they who initiated proceedings with their ceremonial Haka, doing their best to intimidate their fellow Southern Hemisphere opponents.

South Africa were the dominant side over the opening 20 minutes, however, yet only had a 3-0 lead to show for it. The All Blacks should never be counted out, though, and a three-score burst in five minutes turned the contest on its' head and set the world champions on course for a crucial win.

A blockbuster tie demanded a blockbuster start and just a minute into the match, the Springboks earned a penalty and Handre Pollard stepped up and booted a power-hose of a kick past the posts to earn three early points. 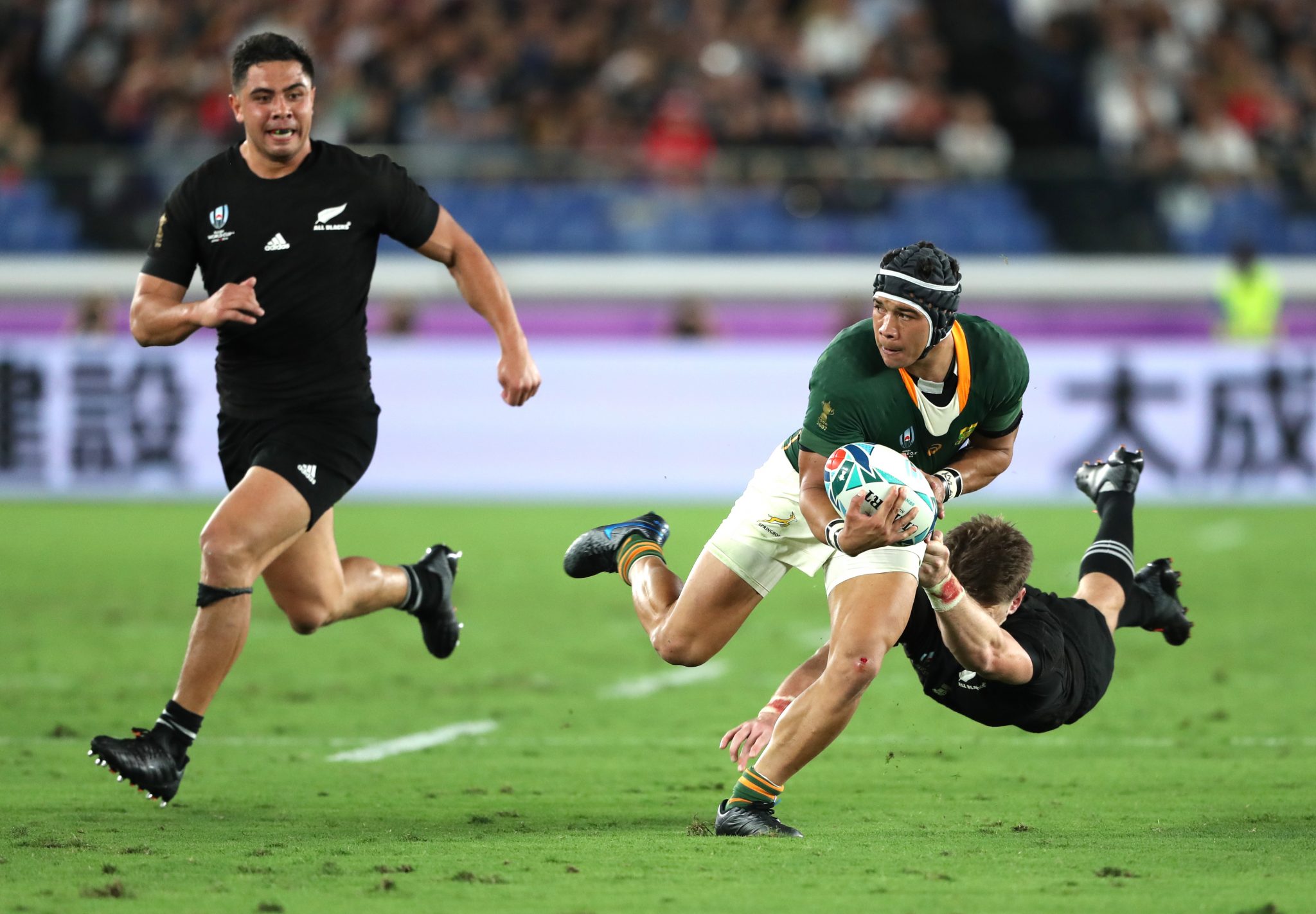 Eight minutes into the encounter and the Springboks were settling into their stride trading the best of the early punches. Pollard thwacked the post with his second penalty attempt of the match but it seemed inevitable that the Boks would score next.

23 minutes into the game and the Springboks were bounding with verve, power and momentum. At that point, a huge 62% of the possession and 69% of the territory belonged to the South Africans.

But it would take far more to quench the hearts of the two-time defending world champs, who responded with a converted try. Following an error by Duane Vermuelen, Richie Mo'unga deftly grabbed his chance to chip to Winger Sevu Reece who proceeded to torch the turf with a turn of pace before passing to Ardie Savea who slung the ball into space where Beauden Barrett intervened. George Bridge triumphantly finished off the exquisite move with a deserved try.

An absolute demolition of the Springboks defence in a simple matter of 30 seconds. Mo'unga grabbed the conversion. 8-3 it stood to New Zealand.

🔥 Sevu Reece with the break
🔥🔥 Ardie Savea with the carry
🔥🔥🔥 Beauden Barrett with the cutting line
🔥🔥🔥🔥 George Bridge with the try!pic.twitter.com/RdKMsvKhw7

Three minutes later and seven more points added to the tune of 17-3 as the champions demonstrated just exactly why they're the favourites to take home the trophy in eight weeks' time.

Scott Barrett scored a try with ease following a pass from Anton Lienert-Brown, who absolutely flew past a gap in the South African defence.

END_OF_DOCUMENT_TOKEN_TO_BE_REPLACED

The Kiwis were getting in behind the Springbok defence like a fox through an ill-guarded hen-house, pushing the Boks on the backfoot. New Zealand worked to capitalise on the mistakes being spilled out by their counterparts. 33 minutes into the match and Rassie Erasmus' men were still leading in possession and territory but appeared lacking in fighting spirit.

Four minutes later, the Kiwis got a penalty as the French referee deemed that Vermeulen was off his feet at the breakdown. Mo'unga teed up the shot from a tight angle but missed and the half-time lead stood at 14. 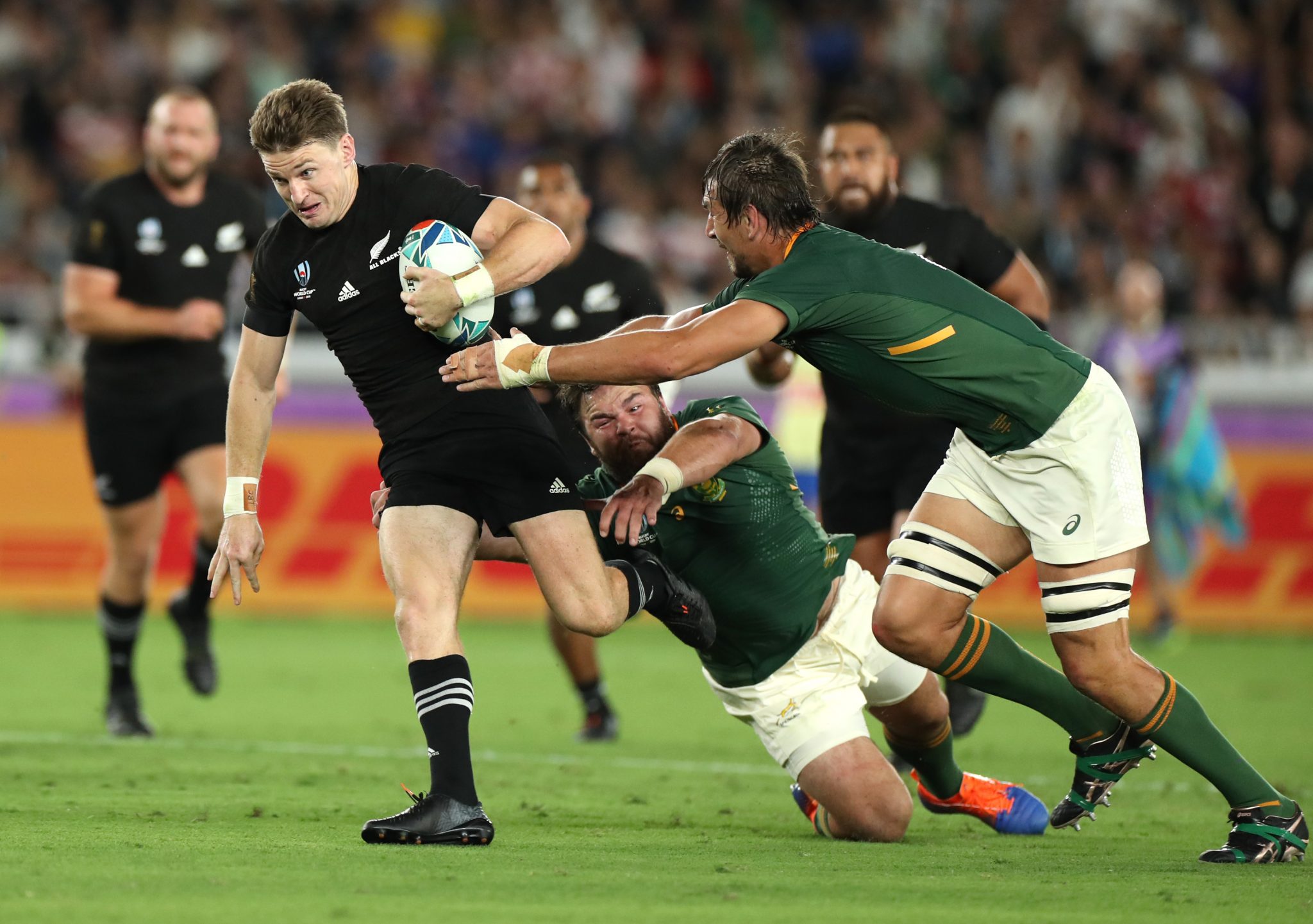 Barrett dished out a star performance in the first half with 11 carries -- more than any other player on the pitch, one of which concluded in the stunning first try for the All Blacks. Worth noting at this point that New Zealand had never surrendered a game which they led by 14 points at halftime.

As the second half kicked on, South Africa had it all to do to get back into the contest. 48 minutes in and they responded brilliantly with a sound try from Pieter-Steph du Toit as they pounced upon the free space afforded them by the undermanned Kiwi defence. That pushed the score to 17-10 to the ABs as Pollard gathered up the extras. 50 minutes in and with half an hour left to play, South Africa were just a converted score away from levelling with the defending champs.

Eight minutes later and the crowds were treated to a peach of a dropkick goal courtesy of Pollard who smashed the ball from the Kiwi's 10m line with unhindered efficacy. 17-13 to Steve Hansen's side as the game turned on the heat. Tensions boiled over in the 61st minute when Reece shoved Faf de Klerk over a difference of opinions; forcing the ref to step in to diffuse the steam.

65 minutes in and New Zealand had another penalty to play with and Mo'unga dispensed the shot with ease - 20-13 with the Kiwis seven points in the clear.

Entering the final 10 minutes of play, the defending champs began tightening the screw, deflating their opponents as best they could as the clock ran down.

New Zealand scored the final points of the match after securing another penalty just inside the South African 10m line. Barrett stepped to make it 23-13 and effectively ended the contest with less than 10 minutes to go. Cometh the hour, cometh the man and Barrett had done so in spades for his side, aptly demonstrating the sparkling talent and mentality sprinkled all over this New Zealand squad.

And so it finished in Yokohama. The All Blacks cruising to 23-13 victory despite being far from their best.

But that is precisely what separated them from the Boks; something that's ingrained by winning two successive World Cups. That mentality to power through, that will to overcome, that domineering spirit to conquer, you just can't buy that. It's earned by the pain, sweat, blood and tears amassed over hours of training, defeats and monumental triumphs over years.

Despite the poor result, it would be unwise to discount the Springboks as serious contenders going forward in the tournament. They still have much to give and they know it, it'll be up to Rassie Erasmus to fire up his talented side for the upcoming clash against lowly ranked Namibia. Write them off at your own peril.

0 - The @AllBlacks have never lost a pool stage game in @rugbyworldcup history, winning all 28 such fixtures, the @Springboks themselves have only lost two of 22 matches in the pool stage (2003 v England, 2015 v Japan). Titans.#RWC2019 #NZLvRSA pic.twitter.com/2thJSSHKRJ

Going forward however, fans will expect both teams to improve. What a Super Saturday it has been!


popular
WATCH: Paul O'Connell proves for the umpteenth time that he's not like us mere mortals
Kieran Donaghy set to break 30-year-old club record this weekend
"He's one of the best athletes, if not THE best athlete I've seen in the last while"
Shane Walsh: 'That's not how I was coached to play football. No one was coached to play football that way'
Sean O'Brien shares some of the worst player forfeits from his Leinster days
Study shows GAA players more prone to binge drinking than their peers
Danny Mills forgets he's on air as he calls Man Utd 's***' on Sky Sports