"He is a proven try-scorer."

The Six Nations countdown is on, and Alex Goode has helped set the scene for players that could light up the championship.

Goode and his House of Rugby co-host Sean O'Brien were tasked with selecting a dream team with players from all this year's 2022 Six Nations squads available to chose from.

The Saracens star, who has featured in three Six Nations campaigns for England, has made his XV selection. It has five Irish players, four from France, two England and Scotland stars and one apiece for Italy and last year's champions, Wales. 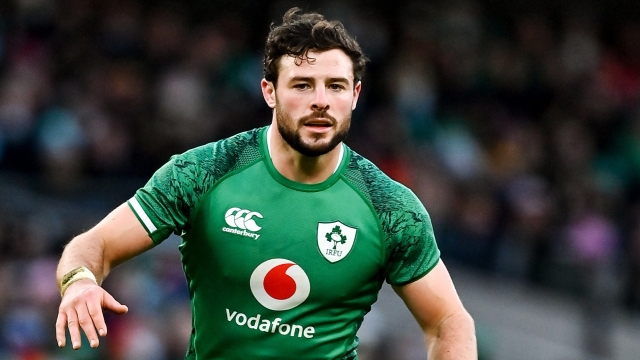 O'Brien took a crack at his Ultimate Team and stacked it with French and Irish stars. They made up 10 of the positions with England [three], Italy and Scotland [one each] taking up the last five.

END_OF_DOCUMENT_TOKEN_TO_BE_REPLACED

Goode and O'Brien ended up agreeing on nine of their 15 selections, but the Sarries star differed with wingers, outhalf, loosehead and a pick each in the second and back rows. While O'Brien selected Scotland's Jamie Ritchie at blindside, Goode opted for Caelan Doris.

"The way Doris played in the autumn was just phenomenal, and I think he's going to take that confidence forward to the Six Nations," says Goode. "His athleticism and power are so useful, in the wide channels and in around 9, and he's a decent lineout option. He's only going to get better. He's quite new to the international set-up, and every time he plays, he seems to go up another level."

While O'Brien went for Marcus Smith at 10, Goode selected Scotland and Racing 92 dynamo Finn Russell. "We've seen a maturity from him since the Lions," he says, "but he still has that 'X' factor."

As for the wings, Goode went for another Scotland player, Duhan van der Merwe, while "proven try-scorer" Josh Adams gets the No.11 jersey.

CHECK OUT THE FULL VIDEO HERE:

You may also like
4 days ago
Study shows rugby positions you are most/least likely to be injured playing
4 days ago
The two toughest calls in Ireland team to face Wales are in the backline
5 days ago
"He didn't give me that jersey back!" - Johnny Sexton on new rival Jack Crowley
1 week ago
Robbie Henshaw on his life-long friendship with Bundee Aki and Netflix documentaries
1 week ago
Munster get brutal Champions Cup draw as Leinster face Ulster in Last 16
1 week ago
“He's gonna be pi**ed when he hears this!” – Anthony Watson's Vegas trip with Tadhg Furlong
Next Page