Fla is not one to mince his words.

It was all doom and gloom for Scotland last weekend, after they were utterly outplayed by Ireland in a 27-3 defeat. The Scots never managed, or really threatened, to breach Ireland's whitewash. Including the 10-minute period where Ireland were down to 14 men. 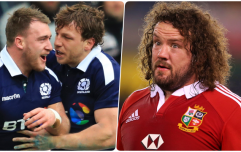 Adam Jones' Lions XV doesn't have a Scot in sight

END_OF_DOCUMENT_TOKEN_TO_BE_REPLACED

In truth, Ireland's shock defeat to Japan this morning actually makes Gregor Townsend's side's task even harder. Assuming bonus point wins for themselves and Japan against Russia and Samoa, Scotland will need to beat Japan by more than 7 points in order to secure progression to the last 8.

"Well, look… They were terrible, they were terrible. I thought it was a combination of Ireland playing well, but when you look at a lot of the errors that they made in the game, you know, I think they went out initially and the idea was to go after Jordan Larmour, Conway, Stockdale, test the Irish back three... but so much of what they did was their own errors. Their set piece delivery at no stage gave them any momentum, whether they were looking to kick the ball or whether they were looking to launch an attack, they never got any set piece momentum...The delivery that they got from their set piece did not help them in any way, shape or form."

Scotland had no joy against Ireland in the lineout or scrum, coughing up possession and territory far too many times and rarely putting together the sleek running game we've come to expect from them. Going further, Fla explained just where the Scots need to improve before they face Samoa on Monday;

"They don’t have a big momentum winner like Billy Vunipola. If England are struggling, they can just take the ball, give it to Vunipola, he’ll get them over the gainline and then they can launch their attack from there. Gregor Townsend will be saying ‘listen, if we want to launch these plays, if we want to use our weapons which are Stuart Hogg, Kinghorn, Seymour then we’ve got to try and get the ball and we’ve got to try and get some forward momentum if we want to use them’, so set piece delivery is going to be the key for them."

For now, Samoa and Russia are next up for Scotland before they face a do-or-die battle with Japan in their final pool game.


popular
From Canada to Carlow in the name of hurling: Nicolas Redmond's journey to the Fitzgibbon Cup
Kerry's captain selection for 2022 sums up the problem with their outdated system
Eddie Jones shares great tale on hour-long chat with 'inspirational' Roy Keane
"It must be difficult to say no, having won a game and heading back together"
Chelsea forced to change Stamford Bridge changing room after Liverpool complaint
Jesse Lingard 'angered by lack of respect' shown by Man United
Roy Keane has heaped praise on Trent Alexander-Arnold
You may also like
6 days ago
Scott Brown waves off Rangers' Ryan Kent after red card
6 months ago
Nearly 2,000 Covid cases linked to Scotland fans watching Euro 2020 games
7 months ago
Why Mount and Chilwell have to self isolate but no Scotland players have to
7 months ago
"What a blow for the nation" - Graeme Souness reacts to Billy Gilmour's COVID-19 news
7 months ago
Rio Ferdinand responds to fans calling him out on terrible Scotland prediction
7 months ago
Scotland cast doubt on toothless England's hopes of Euro 2020 glory
Next Page