QUIZ: Can you name England's XI from every knockout loss since 2002?

Ah happy memories... you know, if you're not from England.

Regardless of all the abuse we like to fire at them, more often than not we have been watching them, tuning in to every game they play, doing everything an England fan would do, except maybe support them. 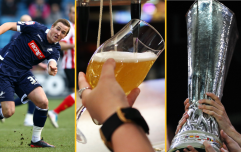 END_OF_DOCUMENT_TOKEN_TO_BE_REPLACED

So subconsciously, after years of watching their heartbreak from afar, you may have actually have acquired a bedrock of English football knowledge.

More specifically: can you name the starting XI from every knockout stage loss from 2002 to 2018? (I've excluded 2014 because, disgracefully, England were sent packing after just two group games.)

Do you remember who started on the left against Brazil when Ronaldinho score that goal? Do you know which goalkeeper took over from Rob Green after that howler in the 2010 World Cup? Who played off the left in Euro 2012?

Put your knowledge to the test, and let us know how you get on.