WATCH: The full fight between Conor McGregor and Nate Diaz from UFC 196

With just over a fortnight to go until Conor McGregor gets the chance to avenge his only UFC defeat, why not treat yourself to a little reminder of how the first meeting played out?

McGregor will be hoping to even the score with his Stockton rival when the pair clash in the main event of UFC 202 on August 20. 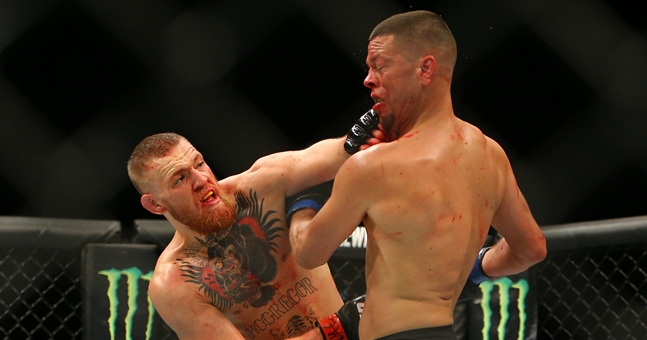 END_OF_DOCUMENT_TOKEN_TO_BE_REPLACED

It's been five months since Diaz shocked the world (but not himself) by submitting 'The Notorious' by rear naked choke in the second round of the UFC 196 headliner.

The Irishman was up on the scorecards during the welterweight tilt but gassed in the second round as his headhunting ways got the best of his fuel tank.

And Nathan Diaz was "not surprised, motherfuckers!"


popular
"I never really cried or got emotional over what I've done as an individual. I couldn't give a s***"
Six golfers that could improve Europe's fortunes at 2023 Ryder Cup
"If I break my wrist, it's on f***ing both of you." - Koepka and Berger act the spoiled child
The FootballJOE Pub Quiz: Week 7
"I was off the grid" - Aidan O'Shea respond's to Mayo criticism after club championship win
'I won The Open by six shots in my home country, but this was the best week of my golfing career'
Garry Ringrose raves about four young Leinster stars to watch this season
You may also like
2 months ago
Conor McGregor deletes series of tweets aimed at Poirier and Khabib
2 months ago
UFC appears to have signed a new Irish fighter
2 months ago
Conor McGregor labelled an 'easy payday' who can't compete with top UFC fighters anymore
2 months ago
Khabib says McGregor is "finished" as Dos Anjos makes his play
2 months ago
Shocking post-fight footage shows McGregor threat that upset Poirier so much
2 months ago
Conor McGregor posts first Instagram since last night's defeat
Next Page