A heavyweight legend who is one of the greatest of all time, with almost forty fights to his name, versus an unknown who had gone 2-0 over a two-year MMA career.

But we put all our cynicism to one side because, on New Year's Eve, one of the best returned as Fedor Emelianenko wrapped his hands for the first time since 2012. 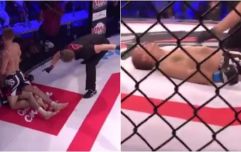 END_OF_DOCUMENT_TOKEN_TO_BE_REPLACED

'The Last Emperor' was once thought to be the greatest mixed martial arts fighter of all time and many still maintain that opinion of the Russian legend who once went 28 fights undefeated which is extraordinary among heavyweights.

Emelianeko's bout with Indian striker Jaideep Singh was the stand-out fight of an exciting, if slightly bizarre, Rizin FF card.

Emelianenko didn't mess about as he landed a typically fluid combination before diving on a takedown and bringing Singh into his realm. 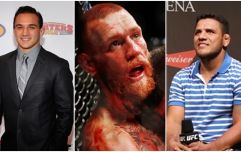 END_OF_DOCUMENT_TOKEN_TO_BE_REPLACED

From there, there was only going to be one winner as Emelianenko fired away from mount with thudding shots that drew the tap from Singh after three minutes.

What's next for Fedor? Another exhibition bout or will he finally make the move to the UFC? Whatever he decides, 2016 is going to be very interesting.


popular
Talksport presenter puts Martin O'Neill to the pin of his collar over Declan Rice and Jack Grealish
Gary Neville sticks up for Ronaldo as contextless pictures and videos taken as gospel
Ariel Helwani shares Paddy Pimblett WhatsApp messages as spat becomes public
Rory McIlroy explains 'falling out' with Shane Lowry that lasted a few years
World Cup Power Rankings: The top eight pundits of the tournament so far
World Cup Power Rankings: The top 10 players at the tournament ahead of the quarter-finals
Roy Keane scores winning goal past Micah Richards in ITV v BBC pundits match
You may also like
4 years ago
David Pocock shares class post-match dressing room picture with Conor Murray
4 years ago
Ian Madigan brilliantly shuts down Twitter user who was complaining about female referees
5 years ago
Sean O'Brien plays very funny prank on shop assistant in Kilkenny
5 years ago
Home and Away's Alf Stewart sends brilliant response to Cork City's league win
5 years ago
Sean O'Brien not impressed with Kearney brothers being referred to as 'famous farm boys'
5 years ago
WATCH: Andy Gray, bless him, got himself a bit muddled while talking about Tony Blair
Next Page